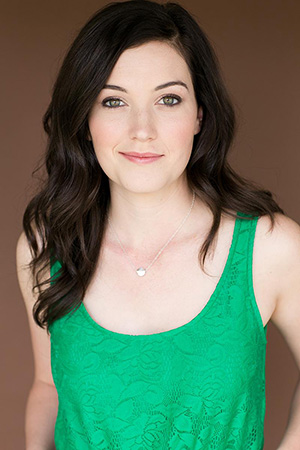 Hopefully, you had a chance to catch the awesome new sketch comedy show Party Over Here on FOX on Saturday night. Party Over Here is a sketch comedy show that stars an all-female cast of hilarious improv performers – Jessica McKenna, Nicole Beyer, and Alison Rich – and is Executive Produced by The Lonely Island. The show is similar in format to Key & Peele, but it’s way more weird and random – and hilarious. The first episode skewered apathetic voters, overly-sexualized food commercials, and even The Lonely Island.

In an exclusive interview for TMS, Jessica McKenna talks about how she came to join Party Over Here, what makes the Upright Citizens Brigade Theater such a special place, and what it’s like to be a woman in comedy these days.

Teresa Jusino (TMS): We’d love to hear a little about how you got your start in comedy and do your own stuff on YouTube, and then how you got this sweet gig?

Jessica McKenna: Totally. I was a theater kid growing up in Orange County, and I started doing sketch comedy and improv when I was at Northwestern. When I graduated, I started at [Upright Citizens Brigade] in New York, and I was in New York for a little under a year. Then I moved to L.A. and continued on at UCB, taking classes and then performing there officially in the beginning 2012. I was doing sketch teams…and actually, Nicole Byer, who’s on the show, joined our team. So, we’ve been doing sketch together for two years, and she’d done sketch with Alison before in New York, and then Alison and I knew each other and performed together. So that’s been my comedy grad school and home. I performed there two times a week if not more.

And that’s where I met my writing partner, Zach Reino. We met in a practice group that evolved into a freestyle rapping improve troupe. He and I kind of clicked when we were in that group, and we realized that we have a common sense of humor, and so we started writing together, which led to us having music videos that we have online. We’ve gotten some writing gigs through that… So it was basically building up my work with my network at UCB and  making sure I had my own content that I was generating, and keeping busy that way. And that was getting me more bits of work here and there.

Then I got brought in for Party Over Here, which was really cool, and just another testament to UCB connections. The whole writers’ room is from UCB, and we brought in Paul Scheer as an Executive Producer with The Lonely Island guys, and he’s from UCB. So there was sort of that…they wanted to tap into that aesthetic and that shared backround that we all have. And I was super-stoked when they gave me the opportunity in the show to write two songs with Zach. Those will be in some upcoming episodes.

So, my comedy journey and my journey to the show has definitely been aided by UCB, and it’s been a great place for me to cut my teeth. And in addition, Zach and I have been honing our voice and getting faster about writing songs together!

TMS: So many amazing, funny people have come out of UCB. What is it about that environment and learning experience is so special?

McKenna: I think it has this dual thing where there are two ways through which you can go through the school. There are the Harold and Maude teams, the sketch teams, and those are open to students, and they hold auditions once a year. But there are also ways to get on stage that involve writing and pitching your own shows, and I think it rewards that kind of drive, and that kind of collaboration.

I think comedy theaters have their times in history, and I think we are a little bit in UCB’s “time” right now.

TMS: You mentioned having done sketch with Nicole Byer prior to Party Over Here. Did you both know you were each up for the show?

McKenna: No. My meeting, I thought was a general meeting, and it wasn’t until the end when they were like So do you want to the show? And I was like Uhhhh, yeah! Is that a question someone would say no to? [laughs] And I think they mentioned in that meeting that they had already been looking for people and they knew that we knew each other, but I didn’t know until that meeting. And I was like Okay! Great! Here we go!

TMS: What can we expect from Party Over Here?

McKenna: It’s definitely sketch. It’s closer to Key & Peele than Saturday Night Live, but I think it’s possibly even closer to….and this is always weird to compare yourself to literally brilliant geniuses, but we are kind of like Key & Peele, or kind of like Mr. Show. What I mean by that is some of the structural elements. I won’t start to compare us to proven geniuses. But we have a combination of pre-taped sketches that operate kind of the digital shorts that The Lonely Island were doing on SNL, polished pre-taped sketches that are kind of like what Key & Peele is.

And then if you imagine those bits where they go back to Key and Peele in the live studio audience, but our show continues into those moments. It’s not just wraparounds. There are additional character bits and sketches that happen in front of the audience. And what makes that different than SNL is that ours are always in a setting where there could be an audience. We’re either ourselves and we’re talking to the audience…or we could be playing characters, but in a place where an audience is required – like a game show, or a TED talk, or a press conference. What was cool about that is that those shows, while they’re not airing live, they were filmed in front of a live audience, so it felt a lot like what we were doing at UCB. It felt like being at a live comedy show, and we only taped those bits once or twice, so they had a greater looseness to them and spontaneity to them. So when you see an episode, it’ll be a combination of the two different ways we’ve chosen to do it, and that’s what makes us a little bit different than what you’ve seen before.

TMS: Now, it’s easy in any field to get bogged down in the negative as far as women are concerned, but what to you is great about being a woman in comedy right now?

McKenna: Well, I can’t compare it to what it was like to be a woman in comedy in the 70s and 80s, but I assume that it’s better in that everything is better for women now than it was then. Like, I’d rather be living now than at any other time in history! What’s interesting about now is that there’s this lantern on women in comedy in kind of a double-edged sword kind of way, where we more we talk about how great it is to be a woman in comedy now, the more we sort of accidentally put across this message that we’ve done it somehow. That the doors have been blasted open, which is so not true.

But having said that, when I look at the women that are currently doing awesome stuff in comedy, that’s what makes me feel like it’s a great time, because I love who’s out there right now. So, I’ll say that part is a victory, and the rest of it we still have really far to go in that…there are more faces that people recognize now, but there’s still unequal writers rooms, and all those ways that maybe the general public might not be thinking about – how their comedy is getting to them in all those stages, and the fact that our big stars are still getting paid less than men.

But I’m super-happy to be coming up in 2016 instead of in, like, 1970 or something. I know I’m standing on other people’s shoulders, and I have a lot more opportunities than my comedy sisters before me, but I love who’s out there. And I will say, our writers’ room? More women.

TMS: There are more women in your writer’s room? That’s awesome!

McKenna: Yeah. I mean, it’s a small room – only 3 and 2 – but yeah, there’s three women and two men. And I think that as cool as it is to see three women in front of the camera, I think this is even more exciting. And the best part is that – I mean, they were looking for men on this show, too – and it just so happened that they liked the chemistry between these three women. And in the writing of the show, it’s not written like “a Female Sketch Show,” it just so happens to star three women. I’m so happy for the opportunity, and it’s been a dream process.