Interview: Keiichi Hara, Director of Miss Hokusai on Taking an “Edo-style Approach” to the Portrait of a Young Artist 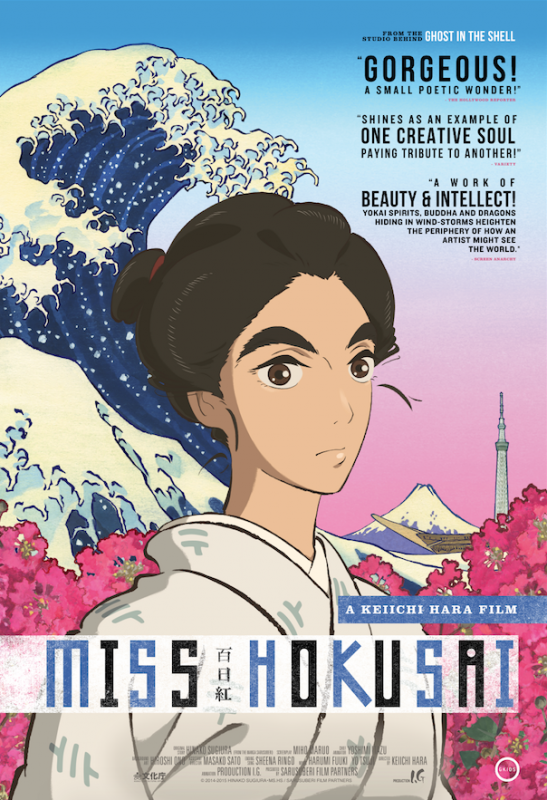 I had the opportunity to screen the Japanese animated film Miss Hokusai, a gorgeous period piece about the daughter of the famous painter Hokusai. From Keiichi Hara, the director of Colorful, and Production I.G, the studio behind Ghost in the Shell, the film combines the fantastical with an understated coming-of-age story that I thoroughly enjoyed. Visually, the movie incorporated Hokusai’s art in stunning ways, but it also utilizes everyday silent moments to paint a portrait of both a bustling Edo and a complicated family.

Through email, I spoke to director Hara about how he approached this story and how he built on Hinako Sugiura’s manga in the film.

TMS (Charline):What is it like to tell the stories of these famous artists as an artist yourself?

Keiichi Hara: I wouldn’t describe myself as an “artist.” I am rather an artisan, who relies on the craftsmanship of many other specialized artisans who can do what I can’t, in order to create an animated film. Making animation is a form of teamwork very similar to the process required to create ukiyo-e prints back in the days, as there was a draftsman making the design; a carver who transferred the design on the woodblocks; the printer who added colours and created special effects; and the publisher, who would find the clients, select the staff, and did the marketing, exactly like a film producer would do nowadays.

So everyone in the animation industry here in Japan feels strangely familiar with the world of woodblock printing once they discover how it worked. At the same time, I believe many of us have experienced the consuming angst of waiting for inspiration to come down from somewhere, and enlighten the darkness of creative stalemate. That is what the dragon sequence in the film is all about. There was a point in the production of Miss Hokusai when I had to wait six months before “my” dragon finally came down. 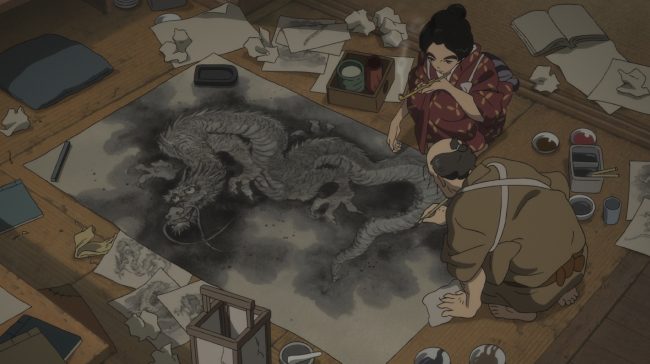 TMS: I was interested in the relationship between O-Ei and her sister, which feels like one of the most important since she’s able to bring out emotions in O-Ei that others can’t. Could you talk more about that?

Hara: O-Nao was Hokusai’s fourth daughter, but the only thing we know about historical O-Nao is her name. Her blindness is a fictional invention of Hinako Sugiura, the author of the comic book this film is based upon. And it’s a touch of pure genius if you ask me: a man obsessed with visual art has a daughter who cannot understand his world, and represents everything he is scared of.

In the original comic, O-Nao appears only for few pages, in the very last chapter. But in those pages we see for the first time an unexpected side of O-Ei’s character, so tender and sweet toward her little sister. I was particularly moved by this extremely delicate affection, so we decided to expand the character of O-Nao and the two sisters’ relationship. It is like O-Ei is trying to give O-Nao what she never had from her father. The bridge scene with Hatsugoro and the snow sequence were written for this film by screenwriter Miho Maruo. As a matter of fact, “family” is the connective agent I used to build Miss Hokusai, as the original comic book was more of a collection of short episodes with almost no narrative continuity.

TMS: Miss Hokusai has a really gorgeous mix of everyday life and the fantastical/mystical. Can you tell me more about how you balanced those tones and elements?

Hara: This is part of the original comic book’s unique flavour. I’d like to believe that the supernatural was an integral part of reality for people back then, but I had also heard that Sugiura used to “see” things, so I took good care to feature the world beyond the veil in our film adaptation.

TMS: What kind of approach did you take to romance in the story? It feels like there’s not a huge focus on romantic fulfillment, but these men (artists, the prostitue Kichiya) seem to play an important role in O-Ei’s growth as an artist.

Hara: One of Hinako Sugiura’s most distinctive characteristics, and one I specifically admire, is her dry, essential and understated storytelling. Therefore you will never see explosions of passion or melodramatic devices in her narrative style. But a whole maelstrom of feelings restlessly spins underneath the surface. Things do happen, and leave a deep mark on O-Ei. It is the triviality of exhibiting emotions against the elegance of hinting at them through subtle details. It is a very Edo-style approach that I tried to keep in this film.

Sayogoromo is a woman and what is commonly translated as a courtesan (to be specific, a highly educated and high-ranking one). Conversely, Kichiya is a man and could hardly be defined as a “courtesan.” He’s a male prostitute with poor education working in a barely legal tea house. This gap was obviously intended. 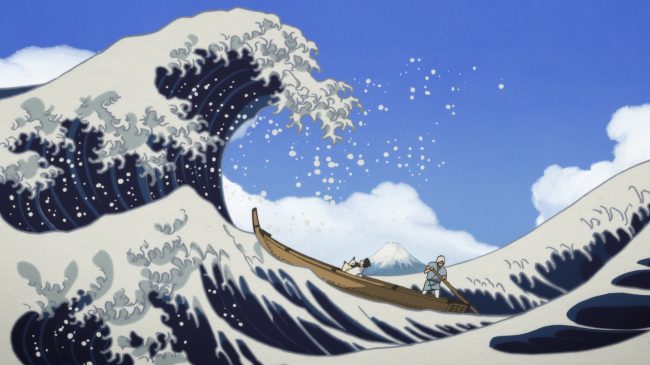 TMS: What was your approach to incorporating Hokusai’s paintings into the movie?

Hara: This is actually an idea that came to me as I was drafting the storyboards. I thought I could take advantage of what it can be done with animation, by disseminating references to actual Hokusai’s works throughout the film, while keeping them functional to the story.

GKIDS is expanding the movie to over 80 theaters October 21st, you can check the full listings in the United States here.