Interview: Harvey Guillén Returns to the Horror Comedy Genre in Werewolves Within

The What We Do in the Shadows actor joins a cast of comedy all-stars the werewolf whodunnit. 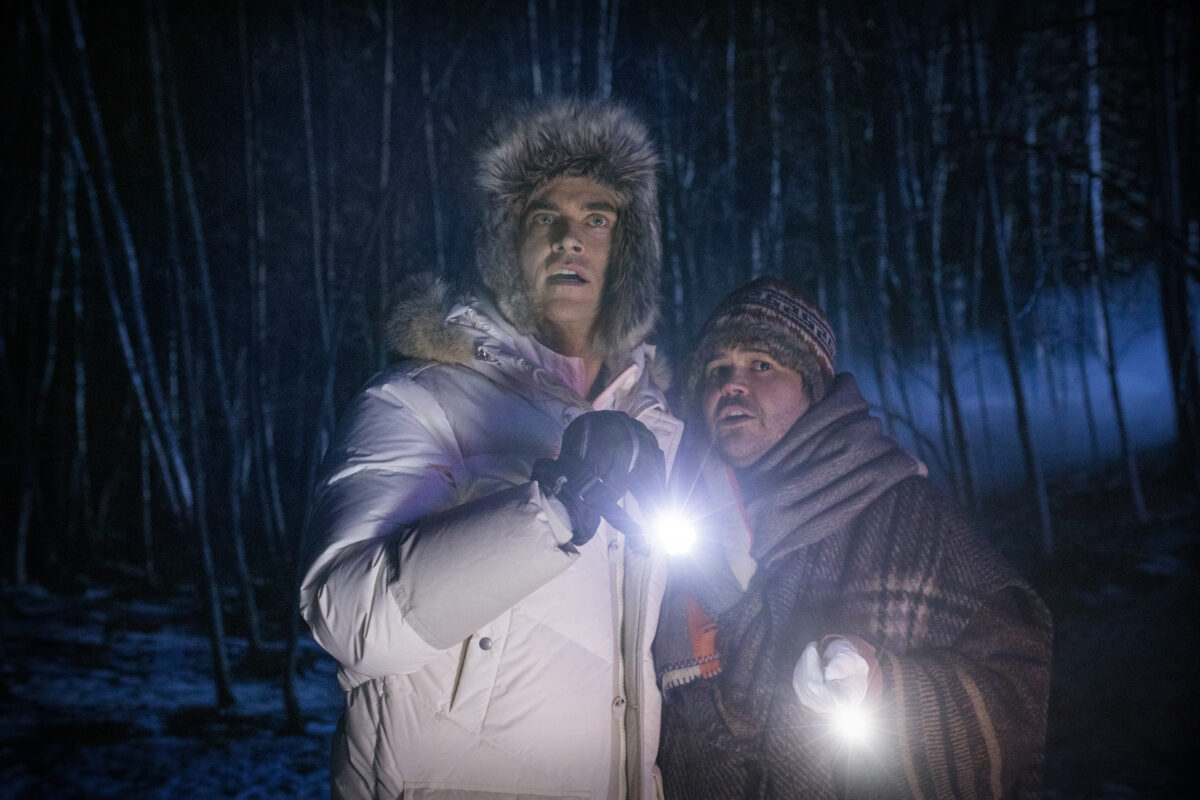 Josh Ruben’s horror comedy Werewolves Within is part creature feature, part Agatha Christie mystery. The film stars Sam Richardson (Veep, Detroiters) as overly polite forest ranger Finn, who finds himself assigned to the sleepy small town of Beaverfield, Vermont. The town is packed oddball townspeople at one another’s throats thanks to a local battle over a proposed oil pipeline. When a massive blizzard isolates the residents of Beaverfield, a mysterious creature begins picking off the folks one by one.

The film, based on the Ubisoft game of the same name, features a talented cast which includes Milana Vayntrub (This Is Us), Michaela Watkins (Casual), Rebecca Henderson (Russian Doll), and Harvey Guillén, best known for playing Guillermo in What We Do in the Shadows. Guillén plays Joachim, a trendy queer Manhattanite who runs a yoga studio with his husband Devon (Cheyenne Jackson). The drama-prone couple offers something we see too little of: queer actors playing queer roles.

Speaking to us about the film, Guillén described playing Joachim by saying, “It was really important for me to make this character be grounded and fun, but not a caricature, and not like a stereotype. I wanted to have elements that could be flamboyant, and could be over the top but it was still grounded in reality. So it was important to me, and I think we accomplished it.”

The film marks his second high profile foray into comedy horror after WWDITS. I asked if he was drawn to the subgenre, to which he replied, “I think I just fall into it when its fun, I just organically am drawn to it, so it seems to be the genre that very much fits me that I love doing, but I also love doing other genres as well, and I love that these two other characters live in this horror comedy genre but they’re completely different. Guillermo couldn’t further from Joachim, which is great to show that there’s different queer characters out there that can portrayed in different ways.”

And while the townspeople in the film are frequently at one another’s throats (literally and figuratively), the atmosphere on set was warm and communal. Guillén described it saying, “It was like going to comedy camp, because we lived together too, you know we were all living in these cabins in the woods. There was no TV and barely any internet, so we kind of became our own hub. We cooked dinner at night, we had a community kitchen that we all used and we’d all hang out there before going to work for coffee, or going after shooting for a late night snack together. We’d listen to records, and it was just wonderful, this idea that you live and breathe as a community and that’s what was being portrayed on screen, was perfect, which is so funny because onscreen everyone has an issue with one another for different reasons, and offscreen everyone couldn’t have been lovelier!”

As for season 3 of What We Do in the Shadows (which premieres in September), Guillén said the series would pick up in the immediate aftermath of the climactic battle that ended season 2. He added, “Colin Robinson turns 100, so we’re celebrating his birthday. We will also be dealing with ex-girlfriends … there’s a lot happening!”

Werewolves Within is currently playing in select theaters and On Demand.