And what job would they each have at the fictional school. 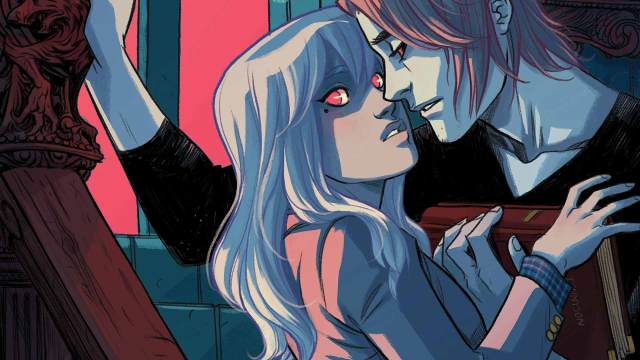 If you’re not reading DC Comics’ Gotham Academy, you should be. With two main female characters of color, cameos from famous Gothamites, and enough creepy castle action to satisfy any lover of gothic lit, this comic has something for everyone (especially for those of us who hang around The Mary Sue community). Issue 5 is out today, so we sat down with writers Brenden Fletcher and Becky Cloonan as well as artist Karl Kerschl to talk about our favorite boarding school badasses.

When I asked the gang if they were influenced at all by another famous gothic boarding school full of witchcraft and wizardry, they laughed. “There’s a tone of dark, spooky stuff and mystery solving that we share with Harry Potter, but the plot elements aren’t interchangeable,” said Fletcher, who said he could see himself as headmaster of Gotham Academy (but just for the cool office). “It’s really just kind of a tonal thing.” Both he and Cloonan also cited Batman: The Animated Series, the ’66 Batman TV show, and even Batman Beyond as further influences on Gotham Academy.

“For me,” said Kerschl, who believes he’d be the Academy’s props master, “the Harry Potter comparison is really predominantly about the fact that we’re focused on specific student and their lives year after year in this big place that is constantly being explored and is full of mysteries.”

“That,” he added, “and also I guess that [DC editor] Mark Doyle has essentially created a Room of Requirement for us within DC Comics. We’ve worked on this book without really any kind of interference or shields – we’ve really just been sheltered under his protective wing to do whatever we want and have fun with it.” 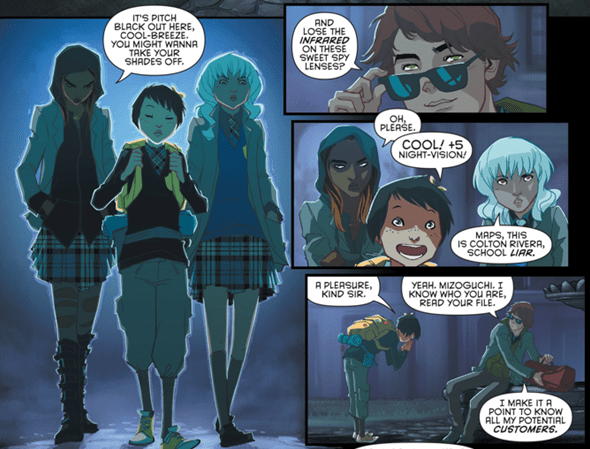 But while Gotham Academy does have lots of fun moments, it touches on some serious subjects as well (though Fletcher, after accusing me of trying to get spoilers out of them, won’t give me any plot-specific details).

“It’s something that we’re very, very conscious of,” he said. “I remember when we turned in our first draft of the second script, Doyle called us on the fact that there was too much levity. Becky and I just kept coming up with jokes, and we liked them, so we kept throwing them in. But when he read the script he told us we had to pull back, bring it back to something that feels a bit more even. And as we move to the end of the arc, we’re moving to a climax with more dramatic conflict, so of course it’s going to feel a little darker – but we’re going to keep each issue balanced.”

“With the darkness we have the levity in it,” agreed Cloonan, who said she would be the Academy’s lunch lady. “There’s always going to be that balance between the dark and the light, the humor and the gravitas.”

Fletcher added that Gotham Academy’s characters are an integral part of this balance. “It’s part why we have Maps as a foil for Olive,” Fletcher said, “because Olive’s got this intensity; she can internalize things. Maps has the complete inability to internalize.” Cloonan agreed, and added that the friendship between Olive and Maps is the true linchpin of Gotham Academy. “Olive does tend to Maps a little bit, and the two of them need each other.”

Maps, resident table-top nerd and hyperactive topographical nerd, is one of my favorite characters in comics write now, and the Academy crew expressed their love for her as well. “She’s so easy to write, she’s a charm,” said Cloonan, to which Fletcher added, “When have we gotten to write characters that are, like, unabashed RPG nerds?”

“[Maps] knows what she likes and doesn’t care what anyone thinks of that,” agreed Kerschl. The team said all of Gotham Academy‘s characters are more complex than we’ve gotten to see so far, and that it’s part of what continues to inspire them to tell more of these stories – to show us all of Maps’ subtleties and what makes her tick. “It would be easy to make her one-dimensional and just super happy and hyper all the time because that’s really fun to write,” said Cloonan, “but we’re always taking into consideration that her feelings are deep – she feels things very strongly and wears her heart on her sleeve.”

Olive, on the other hand, is intense, quiet, and introverted – which makes her a great companion for Maps. Fletcher elaborated, saying,

Olive almost in some ways required Maps to motivate her to become the person she can be to motivate her to take action. Without Maps there fueling that she might be completely introverted; she might be so inside her own head, hiding in her room, feeling sorry for herself, wondering about how her life has taken this turn, how can she go on without her mother, how can she deal with the loss of Kyle, or maybe not losing Kyle, how can she contend with being in this school. It’s Maps who really allows her to be the person that she is. And vice versa – Olive gives Maps that grounding and that feeling of safety, that she’s got somebody there who’s got her back. 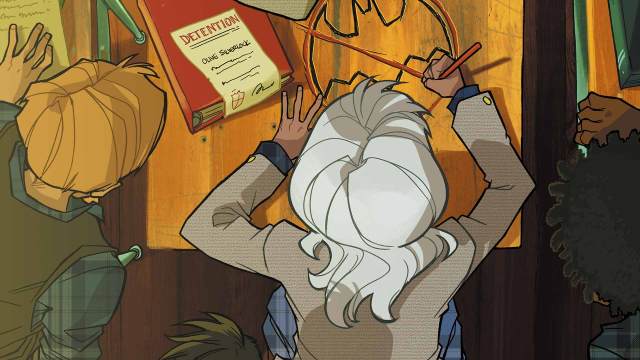 Kerschl said his portrayal of Olive is largely based on that analysis as well; that she’s so constantly in her own head and when Maps calls her to action “she almost deals with it with some exasperation,” he explained. “Like, okay, I’m going to solve this ghost thing because once this stupid mystery is solved I can get back to figuring out who I am.”

Ultimately, the Gotham gang think Academy is a great comic for long-time comic fans and newcomers alike. “If you ever get a chance to look at Karl’s art, you probably should, and this book is the book that Karl’s doing right now, so I don’t know why you wouldn’t want to pick it up!” laughed Fletcher.