Plus more about women in film and being a nerd. 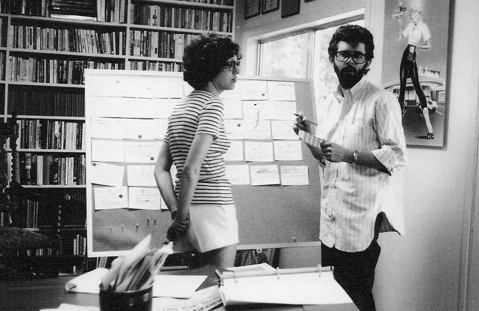 40 years ago today, George Lucas unleashed his blockbuster space opera Star Wars, and with it came the badass feminist icon and leader of the resistance, Princess Leia. With lines like, “Will someone get that walking carpet out of my way?” and, “You came in that thing? You’re braver than I thought!”, Leia shattered the stereotype of the damsel in distress. But behind the best of her wisecracking dialogue was a pair of secret script doctors: Oscar-nominated screenwriters Gloria Katz and Willard Huyck. Without their input, Leia could have been a very passive princess. The Mary Sue caught up with Gloria, best known for her work on American Graffiti and Indiana Jones and the Temple of Doom to talk about Star Wars, her experiences as a rare female screenwriter in the male-dominated movie industry of the 60s and 70s, and being a teenage nerd.

TMS (Jay McCarthy): How did you get started in film?

Gloria Katz: I was an English major at Berkeley and I was there during a very political time (the 1960s). After I left, I went to UCLA and started a graduate degree in history. It just wasn’t for me and I wanted to do something creative. I noticed that in the film department, which was very small, you got to watch movies all the time (laughs). It was a tremendous amount of fun–The Doors were the school band, we were running movies 24 hours a day and there was a great deal of camaraderie, although not many masterpieces came out of it! Ours was really a basis of experimental films. It was a very interesting time.

TMS: Were there many female students at film school?

Katz: We had four women in a class of fifty, including film history. [The professors] were ultimately sexist and demeaning and when you did your projects, they would just not give you any support. It was always like “You’re taking somebody’s position and you know you’re never going to work in Hollywood”. This also translated into demonstrations against the AFI which started around the same time, and finally I decided, “Well gee, maybe they’re right, I’d better see if I can get a job.” I felt my greatest strength was editing and I had a contact with the editing union. I went to see this very old man who said, “Well you look really fragile, and you’ll have to carry very heavy cans.” I thought, “Oh, fuck this. I’m just not doing this. This is ridiculous, I have all these degrees.” I started to think there must be a better way. That’s when I started writing and then I started writing with my husband (Willard Huyck), and some good things came out of that.

TMS: And Willard introduced you to George Lucas?

Katz: Willard was George’s friend and after the debacle of THX 1138 (Lucas’ poorly received feature film debut), he wanted Willard to write about cruising for American Graffiti, and I sort of came with the package.

TMS: I watched American Graffiti and I was really heartbroken at the ending–it’s so sad!

Katz: When American Graffiti screened it was a really amazing phenomena. It hadn’t been done like that before—we were out on a limb because we weren’t telling linear stories. Now you see so many pictures and television shows using the same motif. The music was George’s idea, he was fixated on it. I think it was the first time that wall-to-wall music was played [in a movie], and now its so expensive to do. American Graffiti was made very cheaply and shot in 28 nights, which was OK to write but not OK to live through (laughs).

TMS: When you were a teenager yourself, did you go cruising?

Katz: Well there was an area in LA where you could do that, but I had no friends. So I was in a room reading a book. I was a nerd! (laughs) There were advantages to being a nerd.

TMS: You and Willard were Oscar-nominated for your American Graffiti screenplay. How did you get involved with writing dialogue for Star Wars?

Katz: George was writing the script and he had a lot of reservations about it, but he knew filming had to start. He said, “Polish it–write anything you want and then I’ll go over it and see what I need.” George didn’t want anyone to know we worked on the script, so we were in a cone of silence.

TMS: It seems the best kind of banter in the script—the rapid fire, witty interchanges—came from you and Willard rather than George.

Katz: We just tried to help with the characterization, to add as much humor as possible (they wrote about 30 percent of the film’s dialogue). We didn’t want to take the credit away from him—he had been working on Star Wars for a very long time. It was his vision. We did go visit the set once (in London) and George was very depressed. The whole production was very wrought with drama. Nobody had ever done any of this stuff before, the special effects weren’t working, the English crew were very unsympathetic towards George. He wasn’t getting what he wanted on screen—the technology wasn’t there for him. We kept telling him “it’s going to be wonderful George!” (laughs) no matter what it looked like, to try and cheer him up.

TMS: Did you meet Carrie Fisher on set?

Katz: Just randomly—she was very young and very funny. I was thinking about the relationship between American Graffiti and Princess Leia. Graffiti originally started out with the Laurie Henderson character as the perfect blonde high school princess. And that thought radically changed in the casting of (brunette) Cindy Williams. The casting director Fred Roos was a very big influence on that. Once you create Laurie like Cindy, then that leaves you to rethink. For Star Wars, George had originally seen (blonde actress) Yvette Mimieux in her heydey as Princess Leia.

When we talked to him about the character, we said Leia should be a more ‘Hawksian woman,’ with all the traits that that woman had: she can take command; she doesn’t take any shit, but at the same time she’s vulnerable and to write her as really focused, instead of just a beautiful woman that schlepped along to be saved. For her to be the one that initiated the action. And because Carrie Fisher was so young, the contrast between this young girl and her goals became more poignant.

TMS: So this idea of the ‘Hawksian woman’ came from the films of the director Howard Hawks?

Katz: Yes—a great example of the women that played them is Barbara Stanwyck and Lauren Bacall. To Willard and I, they were such great characters, we thought it would be really neat to repeat them in a space opera where you wouldn’t expect it. Also, George Lucas was inspired by the work of writer Leigh Bracket. She established the space opera genre, and she was one of the writers on The Big Sleep. So George hired her as a screenwriter on The Empire Strikes Back.

TMS: I love the kick-ass attitude you gave Leia in A New Hope—“I don’t know who you are, or where you came from, but from now on you do as I tell you.” What’s your favorite line in the movie?

TMS: How do you think Star Wars: A New Hope has aged 40 years on?

Katz: George didn’t have the technology we have today, but I think it’s the best of the Star Wars films, because it’s closer to his heart. There’s a lot of humor in it, and also a lot of innocence. It was everything that George liked and thought was wonderful; not everything of a “it’s going to make a billion dollars” kind of sensibility. It’s really his innocence and his love for the genre. As things get more famous, more commercial, that gets dissipated. I think what happened on Star Wars episodes I, II & III is when George just had his own power base, it’s sometimes not a good idea. It’s better to have a group of people you really trust and have feedback.

TMS: Let’s talk about the people who influenced George: Scorsese, Spielberg, Coppola. You were basically hanging out with the most powerful boys’ club in Hollywood. What was that like?

Katz: I was just there (laughs). At film school, every meeting I went to, there was only the boys’ club, so you just get used to it. When you say something, if it’s a good idea, they’re not going to go “Let’s not listen to her.”

TMS: I often come up with ideas in meetings and no one says anything, then a guy says the same thing five minutes later and everyone says, “Oh that’s a really great idea!”

Katz: I’ve noticed that too. And I’ve noticed it more with directors. You come up with an idea and then when the star comes in, the director just appropriates your idea, thinking its better it should come from him than you. But you know, there’s a long way to go. It’s very annoying. But there are more women directors, especially in TV and small films than I’ve ever seen.

TMS: You’re also a member of the Academy of Motion Picture Arts and Sciences, which is still very male dominated.

Katz: We were at a meeting with the Academy board of governors and there’s still very few women except for actresses. Kathleen Kennedy (President of Lucasfilm) is the exception. Very few people have been able to accomplish what she has. But she started working with Steven (Spielberg) very early on and worked her way up by being extremely confident.

TMS: When the Academy members doing the nominating and voting are predominantly male, I guess women still get passed over …

Katz: Well I thought the nominations this year were pretty good. Of course the Academy wants to have very populist pictures, but I thought they were really worthwhile. It’s just going to be a matter of time. I think you’ll see a lot more opportunity [for women]. There’s a lot in television, especially in longform. Susanne Bier, who directed The Night Manager, won an Emmy. But I can’t believe how long it takes to change something culturally. It just takes forever.

Today, Gloria Katz and her husband Willard Huyck are amongst the world’s leading collectors of Japanese Photography. ‘Views of Japan’, a memoir of their adventures as collectors, will be published by Steidl in July.

Jay McCarthy is a London-based writer, blogger and advertising creative. She’s into Carrie (Fisher), Harry (Potter) and all things feminist. She has written for The Guardian and blogs for Huffington Post UK. Read more at jaymccarthywriting.wordpress.com.