"There’s a little Rocky Horror, a little Hedwig and the Angry Inch, a little Ziggy Stardust." 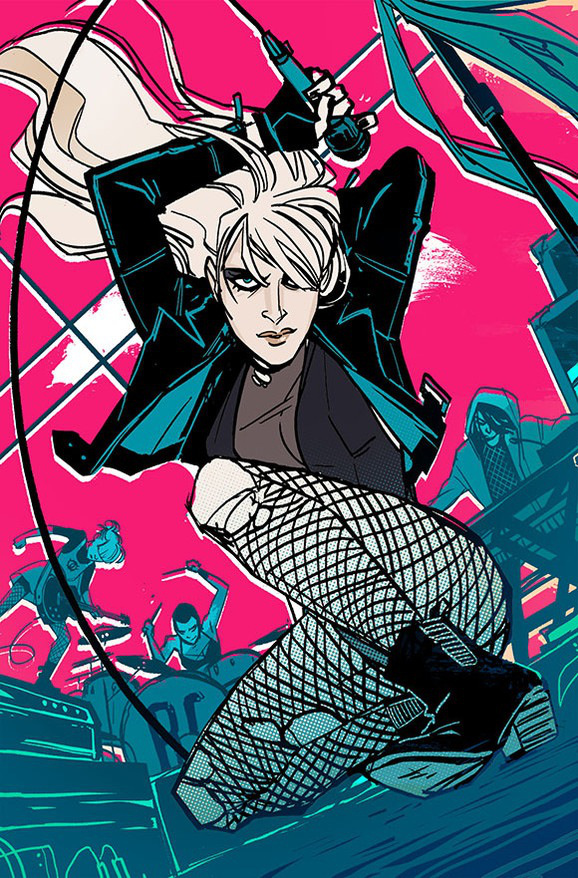 The Mary Sue recently had a chance to chat with Brenden Fletcher and Annie Wu, two of the minds behind the rock-and-roll kung-fu road trip comic that is Black Canary. This series marks the titular character’s first departure into her own solo book for quite some time. Always a teammate, never a… team? No, wait, that doesn’t make sense.

Anyway, we got to speak with Fletcher and Wu and between my nervous shaking and deer-in-headlights staring at the wall, we chatted about the first issue of Black Canary, their influences, and what makes Dinah tick.

Jessica Lachenal (TMS): Getting right into it: tell me, how did you decide on this start to Black Canary‘s story arc? How did you get to this point with Dinah’s story?

Brenden Fletcher: Ah, hmm. I can only tell you so much without spoiling it. But I’m sure you’ve read the Batgirl series that this kind of bounces out of. Cameron Stewart and I have been writing Batgirl since October, and Dinah Lance was a supporting character in that. We didn’t want to make the book another Birds of Prey, so we had to give her a different role, she couldn’t just be another superhero in that book.

So what we did was we put her in a rock band, and it gave her something else to do. And when it came time for me to pitch for a new series, this was kind of an obvious choice. Let’s follow Dinah in this band in a series. When I started to develop the actual story for her own tour, I knew the feel that I wanted to arrive at. So I started putting elements together that would allow me to have this vibe that would have an equal amount of focus on the touring life of a rock musician with crazy martial arts, super spies, a bunch of secret agents, military people, and possibly aliens.

I know that sounds like a wild mix of stuff.

Fletcher: [laughing] Of course! But the influences I’m pulling from are wild animes, like Furi Kuri, or FLCL.

Fletcher: Yeah! Furi Kuri is one of my main influences for Black Canary. And again, I know that doesn’t seem obvious off the top, but all of the elements that you’re seeing play out in the first issue are to approximate that tone that’s fun but also has an undercurrent of melancholy. And that undercurrent comes from Dinah’s personality, and what she’s been through in the last number of years.

This has been a rocky road for Dinah, and she’s at this point where her whole life is changing right now. She’s doing something that she’s not entirely comfortable with, so this story, this first arc, is an explanation of her character and how she finds herself within the alien environment of being a rock musician.

TMS: So I got the sense that she’s trying to find herself in the reflection of the people she surrounds herself with. But what made you decide that these are the characters that she should be hanging out with and everything? What made you want to put this band together?

Fletcher: Some of the bandmates came about to just kind of serve the narrative, to be frank. It’s funny, I’ve been trying to answer this question lately, where do these characters come from, honestly I just feel out the story and this is what I feel like it needs. I think a lot of that feel comes from knowing how the plot should move. It all serves to tell Dinah’s story.

Beyond that, Annie and I have to develop these characters as real people who’ve had lives, who play a certain type of music, who dress a certain way, talk a certain way, and we’ve ended up with this little band who’s fronted by Dinah but the core of the band, the heart of the band, is Lord Byron and Paloma Terrific and young guitar wunderkind Ditto. 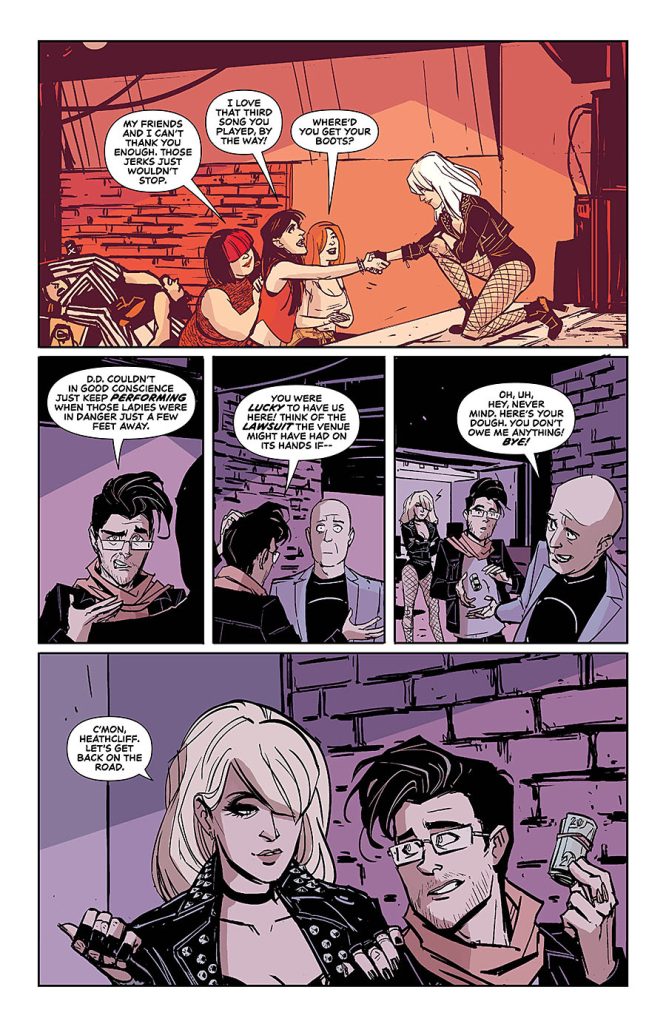 TMS: I’m glad you brought up style and dress, because I know that everyone has been talking to you about your musical influences, but I was wondering if there were any theater or movie influences that came up while you were deciding on an aesthetic.

Annie Wu: Yes! Totally. I’m a pop culture junkie, so I mentally stow away all these references in my head, like a squirrel with acorns. So even right off the bat, I decided to give Dinah a sort of cape-thing that she whips off at the beginning of the show to reveal her Black Canary outfit. Something like that isn’t even just from one place. There’s a little Rocky Horror, a little Hedwig and the Angry Inch, a little Ziggy Stardust.

I get to roll up all these things into a comic. It’s very exciting. It’s weird that I’m finally getting the opportunity to bring out all my musical theater knowledge and all my rock music love into a comic book. It’s kind of amazing.

TMS: So I’m also glad you brought up Ditto in your other answer, because I wanted to ask if she was a riff on Noodle from Gorillaz.

Fletcher: The funny thing is, though Annie and I are both Jamie Hewlett fans, she wasn’t conceived with Noodle as an inspiration. But maybe it was just our subconscious, given that we’re both fans and that was just lurking in the background. But we very quickly realized that was the resonance that this character had.

You will see as the story moves forward, however, that she is definitely not Noodle. There is way more to Ditto than what you see in the first issue, and I think we suggest that by the end of the first issue.

Wu: And even visually, Brenden has given me so much reference of how he imagines Ditto and her tone, the way that she carries herself, and what she wears. She’s very concrete, childish, and playful, so there’s just so many different influences in this one character.

I think as the story goes, we’ll see her reveal that part of herself.

TMS: Going back a bit, I think what stuck me the most about this issue aside from the story was the style of how everything was laid out. There was a very zine-like feel to everything. Was a deliberate choice?

Wu: Oh, yeah, for sure. I decided to go a little bit more… “jaded” with some of the technology almost. They have smartphones in the book, but I still wanted to do zines and crappy Xerox band flyers and all that stuff that feels so inherently rock and roll. 60s and 70s screen prints, all of that stuff is feeding into the aesthetic of the book.

As the arc goes on, there’ll be more and more opportunities for me to do goofy band posters and explore the feeling of old-school rock posters and that sort of vibe. 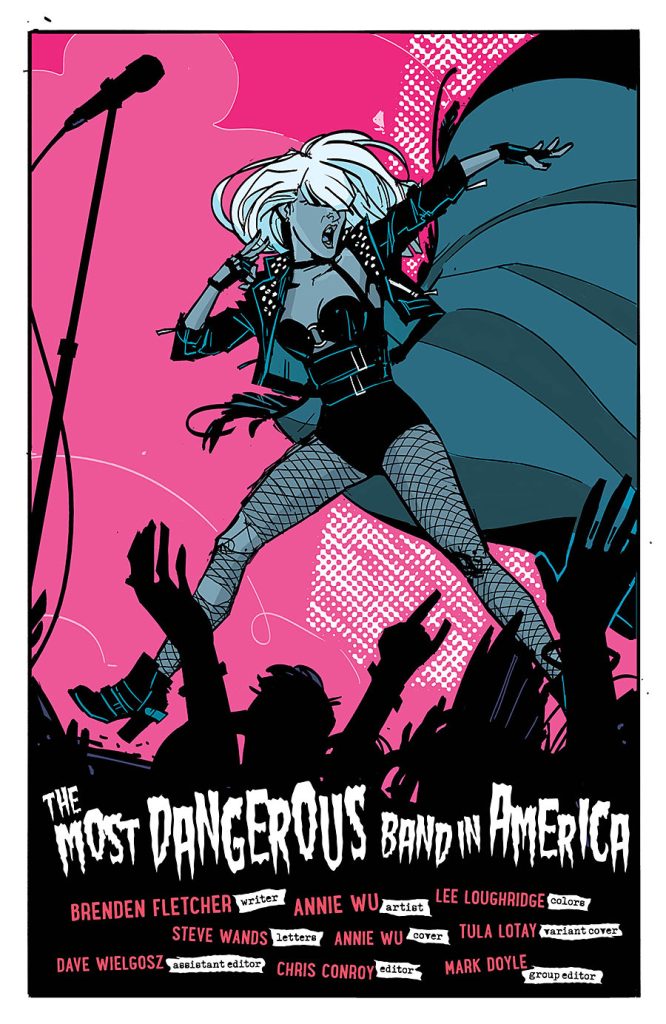 This interview was condensed and edited for clarity and to remove my awkward fangirl silent moments.