Perfect Hair, Literal Science, and the Importance of Representation: An Interview with Night Vale’s Dylan Marron 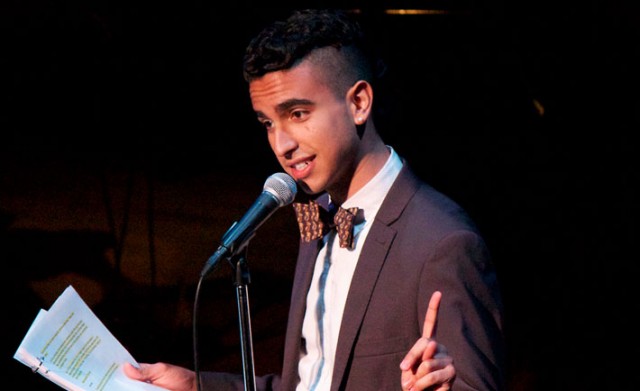 Welcome to Night Vale actor Dylan Marron had big expectations to meet when he first took the role of Carlos, the world’s most beautiful scientist. Luckily, Marron’s skill and charm have won over the Night Vale fan base completely. Recently, Marron spoke to us about his experiences playing Carlos, as well as his dedication to helping people of color through his Every Single Word Project.

Marron first joined the Night Vale crew in late 2013, but he’d worked Cecil Baldwin, Joseph Fink, and Jeffrey Cranor long before then. He knew them from his work in the New York theater group the Neo-Futurists when Night Vale began. Marron says he was a fan early on.

“I started listening a few episodes in and I just loved it. I was so proud of my friends.”

A little over a year later, Marron got to live the dream of every Night Vale fan when he was offered one of the best parts the show had to offer. “I remember late in October of 2013 when I got the e-mail from Jeffrey asking if I wanted to play the role of Carlos. I was like ‘Ah … YES.’ I was honored.”

Marron’s first episode as Carlos was actually the live show “Condos”, which meant he got to take up his new role in front of a live audience. According Marron, it was a very exciting experience.

“I have never experienced anything like this…The tour is amazing but I also feel like I have the opportunity to kind of sit back and witness what this thing is…The mood and the rabid fandom this thing is creating is so cool to be part of. And to get be Carlos, who is such a big character, those are big shoes to fill.

“Carlos is a cool guy. I definitely felt the pressure in the beginning, from no one but myself. Everyone was very welcoming. But when I first got on the stage of the Bell House I was just like ‘Alright, this is possible.’”

Marron also shared his insights into Carlos as a character and how he has changed since the show began. “I think Carlos is super earnest to a fault. His head is a little in the clouds. He’s always doing science and the way he describes science is very literal. To do science he rubs his chin and thinks about something and takes notes and needs beakers … Carlos is in love but that’s less of who he is and more what’s happening with him right now … ”

“I think he’s just a good guy. He just wants to help … And when you see the latest show, ‘The Investigators’, you’ll see he also wants to act in the theater. Although we learn that Carlos in not the best actor …

“He is full of love and openness. The fact that he studies things and people lends to that. He just wants to figure out the world…so he can tell Cecil and his friends about it. I think that’s so amazing.

For Marron one of the best parts of playing Carlos has been the love story he helps to create. On one occasion he even reinterpreted his script to give fans a little something extra. “There’s this whole block of text where Cecil asks Carlos what he’s doing and Carlos says ‘Oh I’m standing in front of a row of beakers, intermittently rubbing my chin and writing equations …’ And that is so Carlos, that’s exactly what’s happening.

“But what I tried was what if Carlos knows that Cecil is on the radio but also wants to say he loves him and wants to tell Cecil that he’s thinking of him in a way that’s not radio-friendly? So I just tried, what if all that was code for their sexual talk? … I just wanted to try it, and the audience freaked out.”

In recent months, Marron has also worked to illustrate the racism in the movie industry through his Every Single Word project. This work is a series of youtube videos featuring popular Hollywood movies, edited down to the lines spoken by actors of color. Most of the videos are less than a minute long. Marron explained that he was largely inspired by his own experiences trying to find work as an actor of color.

“I’ve been an actor since long before Night Vale. Even as young as high school I was getting invitations from agents to sit down and talk with them…I remember they would always look at me and tell me that I would never play the romantic male lead…When I was younger I accepted that…

“[Ten years later] I was still hearing the same thing, the same exact thing that I was hearing in high school…I could no longer accept this answer as okay. It’s not okay for you to tell me that I’m not going to get a lot of work when you in fact invited me to your office because I’ve gotten so much work.”

Visibility is also an important issue for Marron, as he realizes what it’s like to grow up without seeing oneself reflected in film. “When you grow up brown you are aware that there are much fewer reflections of you on screen. You don’t really have the words or the tools to explain it or understand why yet. And that’s the dangerous thing. You internalize it. You think ‘I’m not worth projecting on a screen.’”

Having lived with these ideas himself, Marron particularly relates to the many children and teens of color he meets while on tour, the ones that he wants to give representation to the most. Since starting his Every Single Word project, Marron has been thrilled with the positive feedback he’s gotten. For him, it isn’t a matter of calling out particular directors or studios, but rather showing everyone the systematic, often unconscious, biases of Hollywood. He knows there are great allies out there in the world and feels that Jeffrey Cranor and Joseph Fink are among them. Without such people, the world just becomes a bleaker place.

“This isn’t even about me getting work. This is about how you’re not reflecting the people who are in your audience…You are having a hand in shaping how people exist for each other.”

For now Marron intends to continue producing videos for Every Single Word and then let the collection speak for itself once it’s reached a decent size. He will also continue to play Carlos, the beloved scientist, conscious every time he steps up to the microphone of the difference he is making in the world.