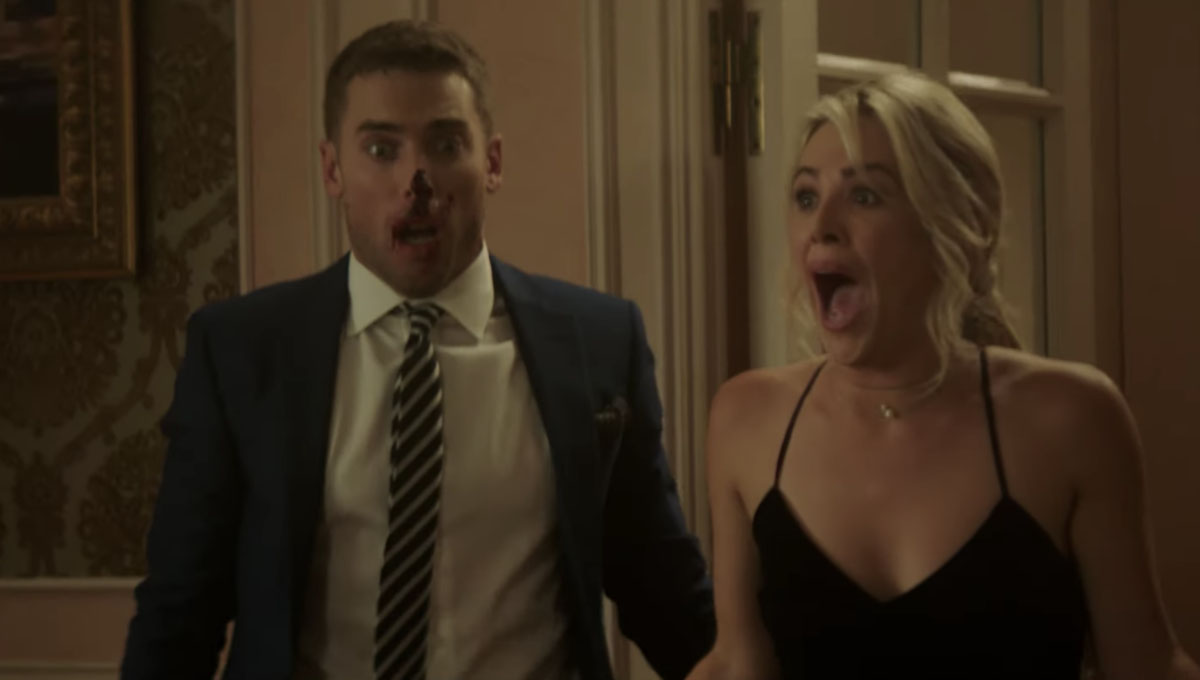 Dustin Milligan stole our hearts as the lovable Ted Mullens on Schitt’s Creek, and so now, in the Into the Dark episode “A Nasty Piece of Work,” we’re seeing a whole different side to the comedic actor. I got to talk with Milligan about the episode and how his character, Gavin—who is a vastly different character than our beloved Ted—is the embodiment of toxic masculinity and more.

Into the Dark is an anthology series in which each new episode is a different look into the idea of the “horror” genre, and “A Nasty Piece of Work” is exciting because it’s more of a comedic take on a frighting tale than anything else, so I asked what brought him into the project. He told me,

I’d sort of been aware of the Into the Dark series as they’d been coming out, and then they sort of run on a bit of a spectrum in terms of how horror they lean, or sometimes there’s a sort of comedy element, but for me, I’ve always tried my entire career to do comedy. That’s something that got me interested in acting and performing.

The episode features Gavin’s coworker, Ted, who wants to progress at his workplace, and when they’re invited to dinner by their boss, they soon realize that it is a fight to the death (so to speak):

It’s a perfect description for Gavin. A character who is so lost in his own desires, he’s quite the departure from Milligan’s now-iconic role of Ted in Schitt’s Creek. The character who managed to sweep Alexis Rose off her feet, Ted is an all-around sweet guy who just tries to do his best. So, it’s a bit jarring to see Dustin Milligan play this embodiment of the masculinity that we hate in our culture, especially after such a role as Ted:

I love it. I thought it was super funny and weird? And no spoilers but it’s not much of a horror?

I pointed out to Milligan that, other than an episode of Supernatural he was in, he’s succeeded in making his career more based in comedy than anything else, and he agreed, stating that that’s what makes Into the Dark so fun:

It’s a genre series more than anything.

At the end of our talk, I briefly told Milligan about my excitement for the final season of Schitt’s Creek—honestly, I’m going to miss that show a whole lot—to which he said thank you for watching, but also, can you blame me? Schitt’s Creek is a nearly perfect show.

If you’re like me, the fear of a scary show might stop you from watching something like Into the Dark, but I highly suggest doing so. Since it’s an anthology series, you can pick and choose which episodes you’re comfortable with, and with episodes like Milligan’s “A Nasty Piece of Work,” it’s more about these characters and the humor therein than any jump-scares you might fear. It makes for a wonderfully fun, feature-length episode of television.