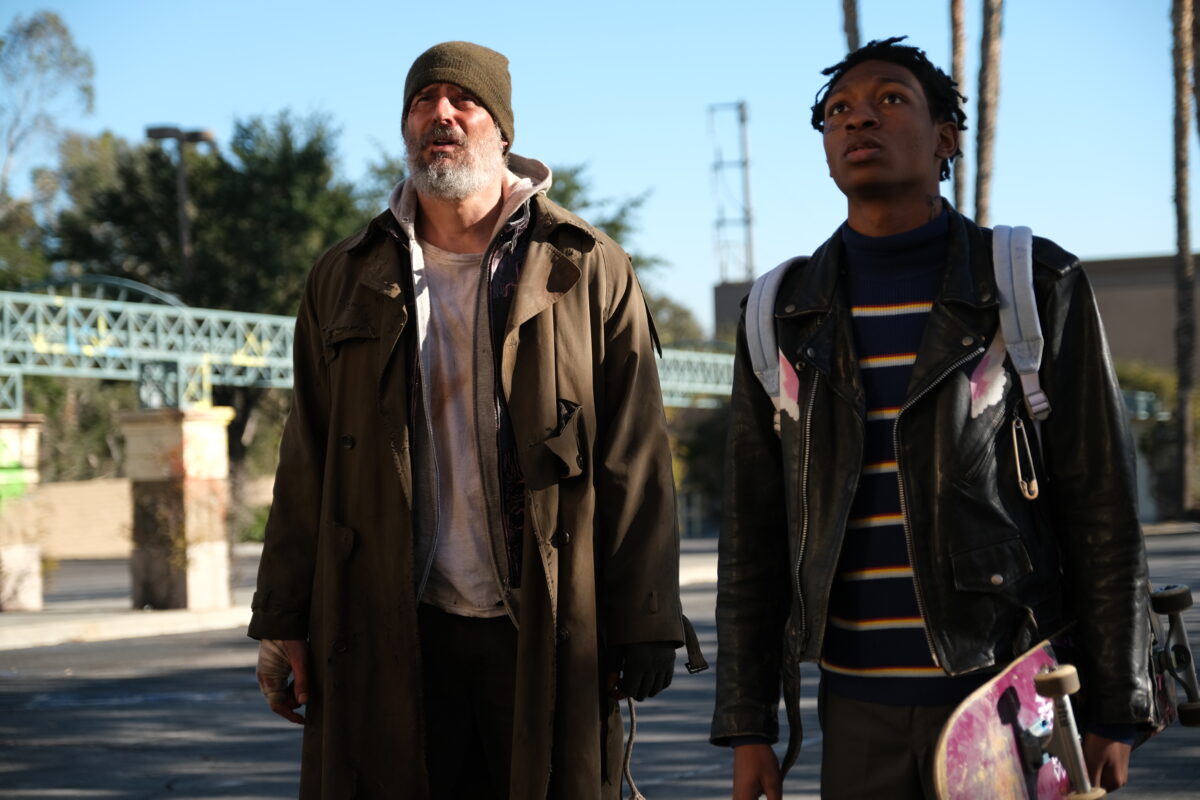 In a pop culture landscape overflowing with superhero content, how do you keep the genre fresh and relevant? If you’re director Adam Egypt Mortimer (Daniel Isn’t Real), you take a neon palette, add trippy visuals, and a puking Joe Manganiello to craft the mindbending Archenemy.

The film follows Max Fist (Manganiello) who claims to be a hero from another dimension who fell through time and space to Earth. Powerless on our planet, Max becomes a homeless alcoholic and addict unable to function in society, until local teen and wannabe content creator Hamster (Skylan Brooks) starts documenting his story on social media.

The two become a sort of negative image Superman and Jimmy Olsen, as they take on an organized crime syndicate that controls their city and has ensnared Hamster’s sister Indigo (Zolee Griggs). While the film is uneven at times, its exciting visuals and strong performances tell an original superhero story. We talked to AEM about his inspiration for the project and what the future holds for superhero films.

The Mary Sue: The film features several animated sequences of Max’s former life on his home planet of Chromium. Were these always intended to be animated? How did you find the animation team?

Adam Egypt Mortimer: When I was writing, there’s the present tense story, and there are all of these things, the superhero adventures, and we don’t know: are they memories, are they nightmares, are they fantasies, what are they? And as we got closer to making the movie, I felt more and more that they had to feel really different than the rest of the movie. You know, I think especially since the first thing you see is Max Fist flying out of a building and falling through the air … if that felt as real as the next part of the movie, it might feel too literal, and I wanted to create the sense of abstraction, to be expressive with it.

So then we started thinking about animation, and I was thinking about how much I love Pink Floyd – The Wall, and the way that they use animation in that movie. It’s a creepy, abstract, emotional, mental world that’s coming through in the animation, and kind of wanting to go for that sort of thing. Putting together the team was really hard, we went through different artists and animation teams. Early on we were seeing versions that were very literal, very well done, but felt more like a motion comic. I didn’t want it to feel like that … it needed to feel like a living memory.

I wound up working with Sonando, a comic book artist I’ve worked with before, and he has a really good sense of architecture and abstraction and storytelling, and it was a super small team. It was just him drawing pictures and just two other people [Kevin Finnegan and Danny Perez] doing all the work to create those sequences, so it was really difficult and really stressful, but it also meant that we could be this cohesive experimental unit and play around with it. Danny Perez is an experimental filmmaker and music video director, and he is responsible for doing so much of the super psychedelic stuff like flashing skulls and vortexes. And that’s where it really comes alive, I wanted it to be an experience, not exposition or a flashback. 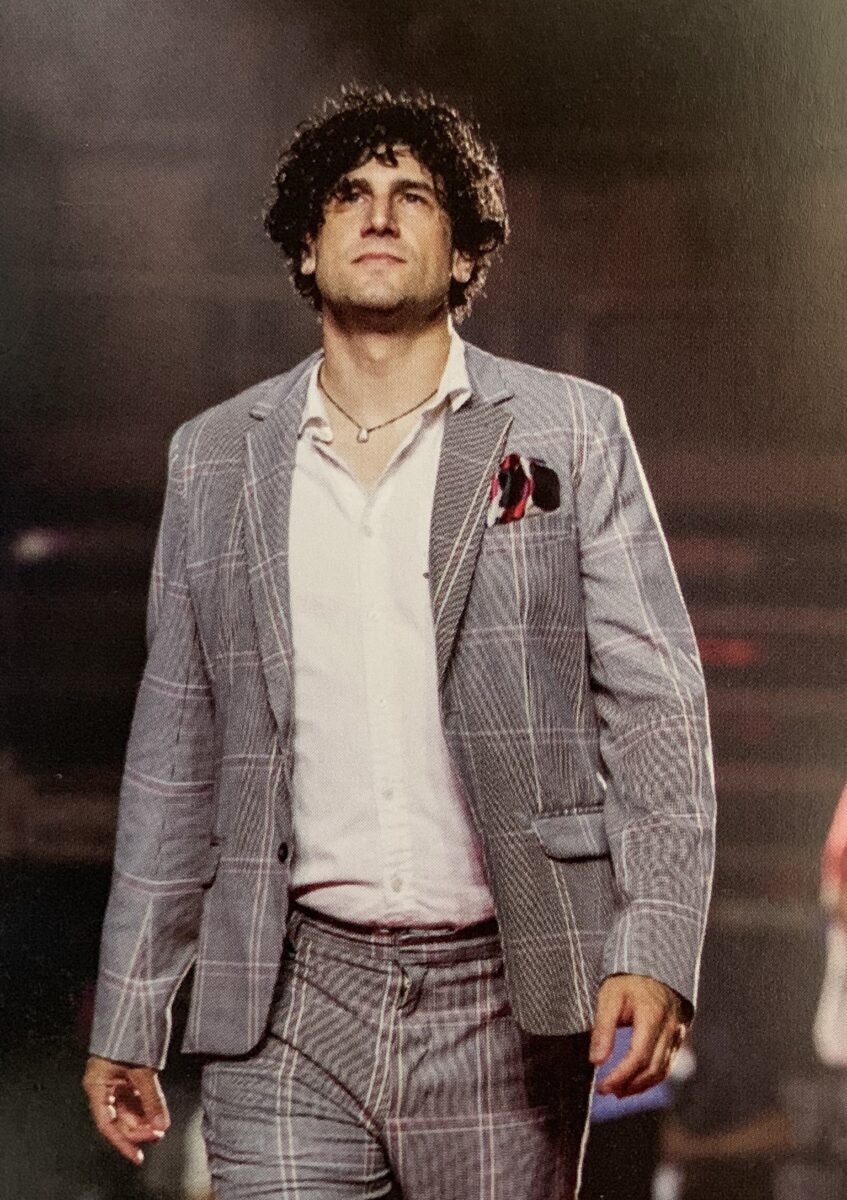 TMS: The film is very evocative of Grant Morrison and Alan Moore, what influences did you draw from the comic book world?

AEM: Well, I would be nowhere without Grant Morrison. Grant is my favorite writer, not just comic book writer, but like, James Joyce, Grant Morrison, Dennis Cooper, my very favorite writers of all time. And I’ve gotten to know him, we’ve been friends for nearly 20 years. His sense of layers of reality, and that superheroes are not at their most interesting when they’re punching guys in a warehouse, they’re at their most interesting when they’re having incredible cosmic, almost religious experiences, like reality-redefining experiences.

And I felt like that was part of the opportunity with this movie for me. We’ve all know seen 50 superhero movies in our lives, so we intimately understand them, in the same way like when Grant wrote Animal Man in the 80s, his audience, Vertigo’s audience at the time totally understood what a superhero was, so you could take it into all kinds of genres, all different flavors, which is what I wanted to do here, so that was a huge part of it for me.

TMS: Yeah, it really reminded me of the psychedelic nature of Alan Moore’s Swamp Thing run.

AEM: It’s all that wonderful stuff in Swamp Thing about how, you go into it thinking this is a man who turned into a swamp thing, but Alan Moore said it was actually a nature swamp deity that mistakenly believes he was once this man that fell into the swamp goo. I think that sense of identity that those people were doing in the 80s is so fascinating. I love questions of who we are, being confused about who we are, and those stories were really grappling with that.