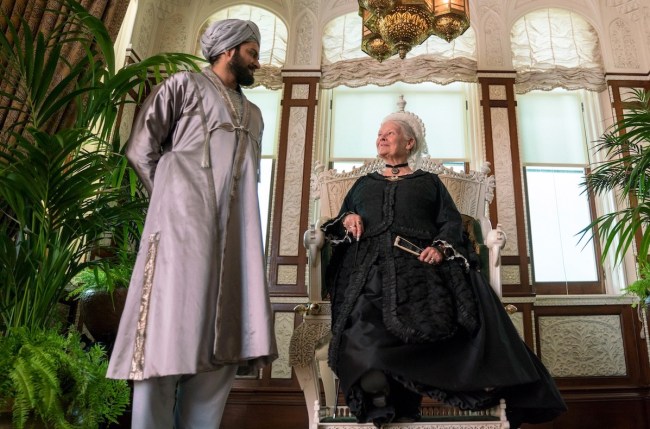 Not only has Academy Award nominee Consolata Boyle dressed some of the most prominent actors of our time, she’s dressed them as some of the most iconic women in history. She’s perhaps best known for the costume design on The Queen starring Helen Mirren, for which Boyle won numerous awards. However, she’s also lended her skillful hand to films like James Kent’s Testament of Youth, Phyllida Lloyd’s The Iron Lady, TV series The Lion in Winter, and much more.

Speaking to Boyle over the phone regarding her work with Stephen Frears (whom she frequently collaborates with in films like Mary Reilly, The Van, Chéri, Philomena, and more) on the recent period film Victoria and Abdul, it’s clear that Boyle’s contribution to these films is a careful balance of accuracy and imaginative storytelling. Judi Dench’s performance in Victoria and Abdul shows us the Queen in the later stages of her life, both proud and strong in her position as the longest ruling monarch of her time as well as deeply lonely, outliving all the men whom she loved.

This is, in no small part, such a powerful performance because of Boyle’s costuming. Subtle changes in Victoria’s dress and hair reflect the changes to her internal world—something that she was extremely restrained in displaying. This gives much more weight to the brief moments of vulnerability when her hair is down, a certain accessory is worn, or when she’s lying on her deathbed, an image far from the ceremony of the beginning moments. Abdul’s clothing shows changes in his status within the household as well as the imaginings of the British Empire—there’s a scene in the opening when he’s given clothes made by British tailors to look “more Indian.”

“I think the main responsibility, the role of anybody connected with any film whether it’s based on fact, historical, on contemporary fact, or a totally imagined world is to tell the story,” says Boyle of her approach, “first of all the script and story and the point of view of the story.  So, in a way, everything will pass through the imagination of all the individual people involved in order to tell that story and move that story along.”

Boyle points out that many of the scenes in Victoria and Abdul would have been the queen’s private world, “so in a way it gives the imagination freedom to roam.” “Historical accuracy is important,” she asserts, noting that there was massive research done in this mix, “but it is equally important to leave all of that behind and to reimagine it through the prism of the basis of the story you are trying to tell, which is this situation between Victoria and Abdul, which is this very beautiful relationship between this elderly and rather lonely and isolated queen, and this young man who came from an exotic world.”

Perhaps one of the most dominant images of Queen Victoria was that of a queen in mourning, a widow constantly shrouded in black. This is the Victoria we see quite a bit in Victoria and Abdul, but upon Abdul’s arrival color and texture comes back into her life—literally “lightening and lifting” her mood.

“Obviously for the Victorians and just generally in that period, they were very much obsessed with death and were very dark because of the high mortality rate,” Boyle points out, “and honestly, she went into darkest mourning after Prince Albert died and continuing on many of her relatives would have died. Just literally, they were surrounded by death even in the higher regiments of society so it was a very specific look and she took it very, very seriously.”

“But within the realm of death and the dark world,” the designer says, “there was also flexibility to use different sorts of black and different combinations of color and I capitalized on that to show her slow progression as she relaxed and as her spirits lifted. I used color very subtly, and also white which is a color of mourning as well. I used white quite a bit as a decorative and as a feature for embellishment, but also I used various different types of black or very dark browns or very dark purples and very dark grays.”

“Then with embellishment and decoration, obviously she was at ceremony and evening events so that gave me freedom. But also to show how she was opening up and relaxing a bit and seeing the joy of life and as her friendship with Abdul progressed and she learned more and learned how to write Urdu and all of that. She’s so curious, she was so intellectually curious. It was a lovely thing to be able to express visually in that way. I did it with color and texture, but within a certain limitations of such.”

On Abdul’s uniforms, which stand out so strongly among the other members of the household, Boyle talks about a different kind of shift. “Obviously his uniform, the royal household uniforms were a construct,” she says on the first scene, “They were made by English tailors and royal tailors so they were an imagined thing about how western tailors would visualize what an Indian should look like based on a portrait.”

As the Queen’s Munshi gains more status, his clothing changes accordingly. “He had a lot of power and people thought he had a lot of power having direct access to the Queen. So he was starting to utilize this a bit and there’s elements in the story where you can see him lording over Muhammad (the servant who comes the same time as him), getting him to carry his luggage when he returns to India from that long trip, and he puts on weight. His clothes start to reflect that.”

“They become more traditionally Indian, but more ceremonial Indian and his interpretation and his embellishment of actual original Indian clothes. So we were very carefully in reproducing that, slowly from his very early stage when he was a simple clerk in India where he just wears bleached linens onto where he progressed into silks and rich colors, and the embellishments of what he thought reflected his position in the royal household. This annoyed the establishment more and more, as he started more and more to flex muscle or seems to be flexing his muscle in that way.” 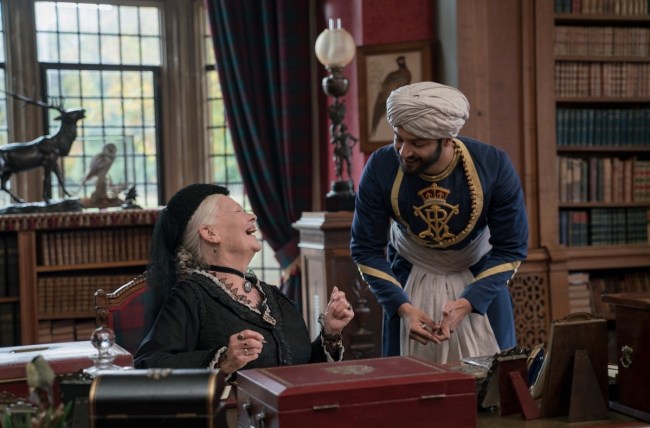 The unlikely friendship and closeness between Victoria and Abdul can feel like a puzzling one, and unexpectedly, a timely one about curiosity, fear, and love. The resonance of the xenophobic attitude of the royal household at the time, the cruelty directed toward Abdul, and the comfort no one else could give Victoria stumbles at times, but in the quieter moments we see the echoes of the real Victoria and Abdul. In these glimpses, we see that although these were not perfect people, true love did exist despite all these differences and obstacles.

The most important job for Boyle, was the subtle use of costume to show “the balance of their relationship and how it reflected their inner thoughts.” The current resonance isn’t lost on the designer, who says, “I thought it was very important story in this moment in time and a very beautiful story.”

“But mostly, my main ambition throughout was through the costumes to tell that very private and not very well known story about the end of Victoria’s life and how very special a meeting between young and old and between people from such different, utterly different backgrounds and cultures could communicate on that level, totally freely,” says Boyle. “Both sides have their beauty and relevance, but to show that contrast between the rather tight-lipped and northern look to a more open and energetic look of the two cultures coming together. That was an ambition and challenge for us all I think.”

Victoria and Abdul is in theaters now.