Review: Victoria and Abdul Tells an Important History, but Forgets a Crucial Perspective 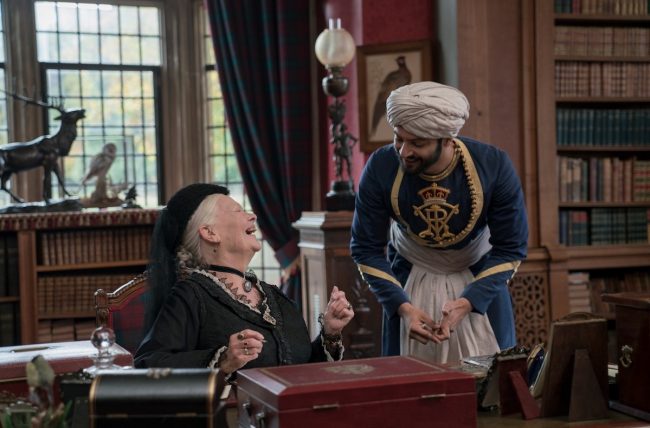 Stephen Frears’ Victoria and Abdul is more Victoria than Abdul.

Announcing early on in the title screen that the events of the film are an imagined portrayal of two real people, the narrative unearths the deep friendship shared between Queen Victoria (Judi Dench) and her Indian advisor Abdul Karim (Ali Fazal). Karim, a young clerk, travels from India to participate in the Queen’s Golden Jubilee. There, he eventually becomes an important part of her household, teaching her about Indian culture and history, Urdu, and mangos.

This is an unknown history and not by accident. After Victoria’s death, Karim is unceremoniously thrown out following her funeral by the high society that detested him and all records and letters between the two burnt. The film is based on Shrabani Basu’s Victoria & Abdul: The True Story of the Queen’s Closest Confidant. (Basu had discovered his diary in recent years.) Written by Billy Eliot’s Lee Hall, the story is one highly invested in this unlikely and unexpected friendship—one that is deep and caring despite differences in age (almost 40 years apart), culture, and status.

Dench gives an intimate and thoughtful portrait of a Queen at the end of her life, giving us glimpses at the many sides of Victoria—lonely, regal, grieving, etc. From the first moment we see her in the middle of a ceremony, she is the unsmiling and unamused center of gravity in this film as everyone moves to accommodate and respect her. After Karim is introduced, that dynamic shifts as she begins to speak frankly to him about her loneliness and her curiosities (she wished to see India, but never could). Karim, much to the dismay of the Queen’s staff and family, gains more privilege to the Queen as a kind of adopted son.

However, as beautiful as this story of friendship appears and as critical the film is of the racism Karim faces, it stumbles more when trying to address the backdrop of colonialism. The violence of the British Empire is mostly a sidenote, mostly voiced by the less privileged attendant Mohammed (Adeel Akhtar) who names Victoria as oppressor. Victoria is portrayed as mostly oblivious to the conditions of the British presence in India, and her ignorance of the Indian Rebellion of 1857 is the focal point of one subplot.

The film is by no means an active promotion of empire, even making a few small jokes at the Empire. When Karim and Mohammed first arrive in Britain, they’re told, “Welcome to civilization” as they look at the disgusting shipyard in horror. The British ignorance of India is played for laughs. Still, while these small jokes allude to awareness, they fall short in compensating for the lack of dimensionality in Karim. 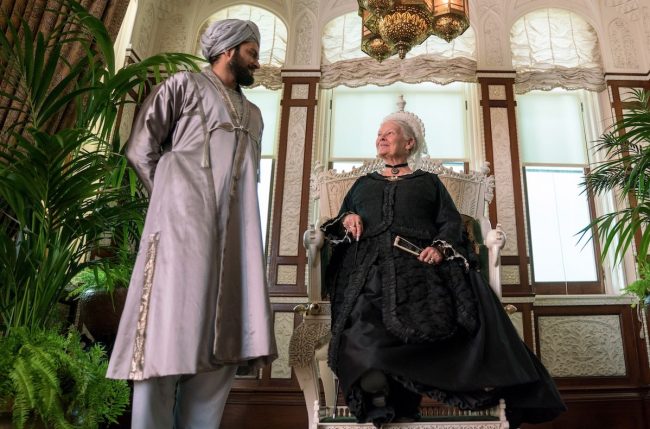 It is this side-stepping that the film struggles with, as Victoria is given many beautiful speeches, moments of triumph and despair, and vulnerability. Karim, in contrast, remains a mostly one-dimensional character seemingly present only to incite these changes within Victoria. In one of his first encounters with Victoria, he goes on a monologue about carpets that feels like something right out of the “Magic Brown Man” handbook.

The timeliness of reviving a history that tells us there was a Muslim at the center of the British administration is not lost on me, but to focus so heavily on his service rather than his, well, personhood feels misguided. At best, it’s a story that prioritized Victoria and sidelined him despite good intentions (Dench is, we know, a bigger star). At its worst, it’s a trope-y portrayal that ends up perpetuating the narrative of the “good immigrant” through Karim’s gleeful subservience. The second time he encounters Victoria, he kisses her feet…because he thinks it’ll cheer her up?

Karim constantly gushes about how honored he feels, how thrilled he is to serve, and his incredible joy in being allowed to teach Victoria—though the instructions feels at times more like play or tourism for Victoria. She gets to wear accessories, sit in a recreation of the Peacock Throne, and eat curry. Karim doesn’t need to be a fierce anti-colonial advocate—that might be a bit of a historical jump—but to try and focus on their human connection absent of the conflicts of nation feels dishonest or irresponsible.

I enjoyed the way the film dove so deeply into Victoria at this stage in her life and all the complications of a woman who outlived so many of her loved ones, served as the longest-reigning monarch of her time, and existed during a time of so many changes. I wish it thought to do the same of Karim, a man whose extraordinary and previously unknown story deserved more.