Interview: Comfort Love & Adam Withers Give The Uniques the Overhaul It Deserves 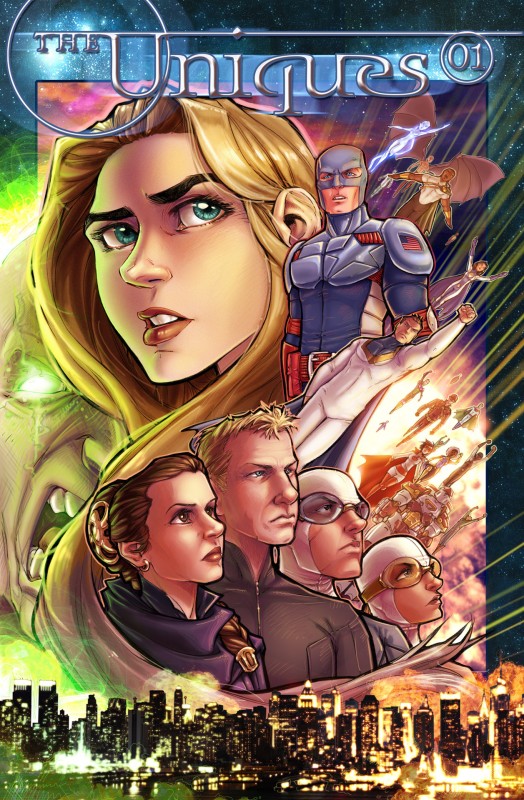 One of the titles featured in Previews‘ March “Women in Comics” issue was an updated edition of a book that’s been a staple of the self-published scene for years: kid-heroes comic The Uniques, by Comfort Love and Adam Withers.

The Uniques chronicles the adventures of a group of young superheroes struggling with the shadows cast by the previous generation of supers, as well as their own personal tragedies. It features a large ensemble of characters in a variety of shapes, sizes, and gender expressions, and the first collected edition clocks in at about 400 pages.

In the new edition, Love and Withers have tackled the challenge of creating a “Directors’ Cut,” turning The Uniques into the book they imagined from the beginning. Reworking a book with this size and scope is an impressive undertaking, and let it never be said that Love and Withers are slackers. In the eight years since starting The Uniques, the duo have learned a lot about making comics, and they’ve used every bit of that knowledge to take an already great book to a whole new level.

Some of the updates are subtle, like extra polish on the existing art and minor edits to the text, but parts of the book have been completely overhauled. A dramatically different opening and new character introductions go a long way toward building the world of The Uniques and giving readers a chance to engage with the story. More than anything, Love and Withers have learned to take their time, unpacking the pages and slowing down scenes, making the new edition less rushed and claustrophobic than its predecessor, and ultimately a more enjoyable read. 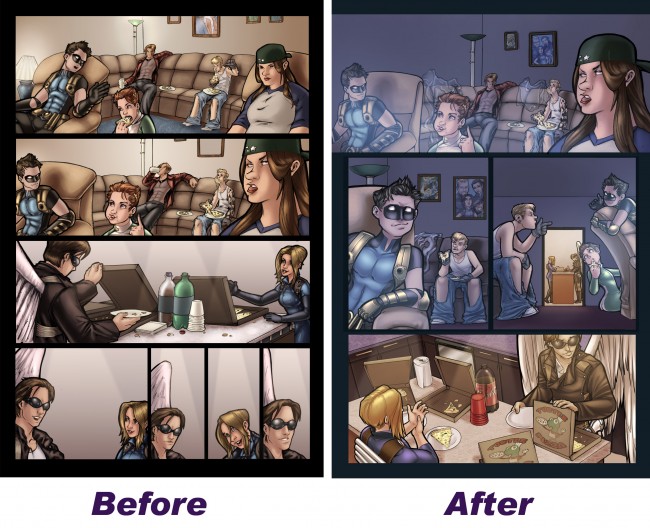 Overall, The Uniques is a fast-paced, candy-colored delight of a comic, and it’s a breath of fresh air for superhero fans looking for a little more fun in their funny books.

I talked with the two creators about the process of updating the comic and the Women in Comics spotlight.

Jordan West (TMS): You started publishing The Uniques in 2008 and were developing the story for years before that. Can you tell us a little about your journey with this book, the different stages it’s been through?

Comfort Love: The Uniques is a concept I’ve been working on since I was 13, and has been refined and re-refined over and over since then. Then I met Adam in college, and we spent years developing the story and characters together.

Adam Withers: Yeah, Uniques really started to belong to both of us. So, when we decided to take the risk of going out and self-publishing, Uniques was the book we wanted to make. Self-publishing was a really scary way to try to break into comics, but within a year of launching issue 1, it was successful enough to become our full-time job.

CL: After the end of the first “season” of The Uniques, we took a couple years off to do our second series, Rainbow in the Dark. In that time, Rainbow got really popular, was nominated for numerous awards, and became the book that we’re most known for.

AW: We were concerned that, when we relaunched The Uniques, people would naturally want to go back to the beginning and start from the first volume and wonder why it wasn’t as good as Rainbow–not realizing that The Uniques started releasing almost five years before Rainbow finished.

CL: That’s when we started considering a Directors’ Cut re-release. But we aren’t just making the art nicer; this is a chance to go back and make the story what it always deserved to be.

AW: That’s why this is an Extended Directors’ Cut. There’s a ton of new material–the first issue of the original run is now the first two issues of the EDC–and the scenes we’ve kept have a lot more space to breathe, to get to the heart of the characters and the story.

TMS: Some sections have gotten a little polish, while others have been completely redone. Did you notice any trends, like “Wow, we’ve gotten a lot better at doing ___!” or “We really nailed all the scenes with ___”? Any surprises? Things you thought were going to need more work than they did or vice versa?

AW: Part of the fun of going back into these issues is watching ourselves getting better. Every scene we’re touching up, we’re seeing our younger Comfie & Adams figuring out how to tell stories.

CL: One thing we always focused a lot on was expression. Our characters have always been really expressive, and putting real emotion into their faces and poses was something we worked hard at. We’re even better now, but looking back we can see how much of a priority that had always been for us.

AW: Yeah, the characters were always our biggest focus. The backgrounds…not as much. Those are a major thing we’re fixing now.

TMS: Obviously, it’s exciting to see The Uniques featured in the Previews spotlight. Who are some of the women in comics you want to shine a light on? Creators you admire? Favorite characters?

CL: It’s wonderful to live in a time where you can ask a question like that and we can have a huge long list of creators and characters to choose from. Lora Innes (The Dreamer, Wynonna Earp) is one of our favorite people in the world, and someone who’s work we always look forward to seeing. We also love creators like Jennie Breeden, Danielle Corsetto, and Renae De Liz.

AW: In terms of characters, we particularly love Forever in Lazarus by Greg Rucka and Stel from Low by Remender and Tocchini. Also, I’ve become a huge fan of Valiant’s comics in the last year, and Faith is a great book and a great character. She’s almost completely unique in comics, and is as fun as she is refreshing.

TMS: There’s a lot of discussion around women working in the comics industry, both depicting challenges and celebrating accomplishments. Comfort, can you talk a little about your personal experience? Memories that stand out? Attitudes, helpful or hindering, that you’ve encountered?

CL: It’s been a really interesting time for us. We started self-publishing in 2008, but we’ve been doing conventions as professional artists since around 2003, so we’ve been there in the trenches watching the industry transform. When we first started, people would assume that Adam was the sole artist. Some wouldn’t even talk to me–like, I was just the girlfriend or something, and not worth paying attention to. It’s changed so much!

AW: Another thing is that it depends on where you look. Sure, comic con crowds would overlook Comfort, but at anime cons it’s completely different. Like, 90% of their artist alleys are women! At those shows, people used to ignore me completely and assume Comfort was the sole creator!

CL: That’s when we knew that this industry wouldn’t stay the same forever. There’s a whole generation of new talent coming up, and the majority of them are female. This is happening in a whole lot of fields–women are outnumbering and outperforming men, and just plain seem to want it more. Guys are lagging way behind.

AW: At the same time, the female fanbase (which was always there, despite how it might seem) has found their voice and is starting to speak with their wallets. Publishers are starting to see a strong financial incentive to make the kinds of books we want to see.

The first three issues of the remastered Uniques are available through ComfortandAdam.com, which also offers a free download of issue #1; you can also find the first four issues on comiXology. The new edition of volume one, Come Together, is available through comics retailers. Other titles from Love and Withers include the Harvey Award nominee Rainbow in the Dark and the comprehensive how-to book, The Complete Guide to Self-Publishing Comics, commissioned and published by Random House. Love and Withers are regulars on the convention seen and can be found at a number of upcoming cons, including DragonCon and New York Comic-Con.