This is not an April Fools' joke! The Ninth Doctor is back!

Today’s the day! The Ninth Doctor is back in an all-new five-part miniseries from Titan Comics called “Weapons of Past Destruction,” written by Cavan Scott (Who-ology: The Official Doctor Who Miscellany) with artwork by Blair Shedd (IDW’s Doctor Who). Scott, who got his start in journalism and magazines and has gone on to write 70 books and audio plays, is no stranger to writing Doctor Who. He wrote his first audio drama (a Sixth Doctor adventure) for Big Finish back in 2001 and has been interacting with the Whoniverse in some way or other ever since.

I spoke with Scott on the tenth anniversary of Doctor Who‘s return to television, and he told me why he’s thrilled to be writing the Ninth Doctor, why he thinks Doctor Who is so successful in the US, and what he loves about the Ninth Doctor/Captain Jack/Rose dynamic.

On his history as a Whovian:

I started watching Doctor Who when I was really quite little. I was terrified of the Doctor at the time, who was Tom Baker. I think I was more scared of him than of the stories and the monsters themselves. His voice just terrified me! Anyway, mainly because my grandma used to watch it right from the beginning, from the first episode, “An Unearthly Child.” She watched it, and we’d visit on a Saturday, and I’d sit and watch it with her. That was my beginning with it. In the 70s over here [Scott lives in the UK], Tom Baker was everywhere. The Doctor was a huge figure. It was probably only when the next Doctor came – Peter Davison – that I started to get into the wider areas of Doctor Who: the books, and comics, and all the things that go with it. And throughout the 80s, my obsession grew. And then, of course, it went away! It finished, or so we thought, in 1989. But I kept with it.

On Doctor Who‘s success in the UK and Across the Pond:

I know that when I started watching it, it was on in the States on PBS, and it had sort of a cult following. So it was always there, bubbling away underneath the culture. And you saw references every now and then, and it was really cool, where you’d pick up a Marvel comic and see a reference to Doctor Who and be able to say Oh look! They get it!”

When it came back – it was amazing that it came back at all, because over here it was treated as a bit of a joke before its renewal when it came back in 2005. And it was only when we got people like Christopher Eccleston that people really sat up and took notice. So, I think it surprised everyone that it was going to be popular over here. But it took off, and went mad.

I don’t think i was surprised when it translated over to the States, and I think it’s because it didn’t try to be too American. You know what I mean? When there was the Paul McGann movie – which I must admit I loved – it was really trying to be an American show. It felt like you were watching ER or something like that with the Doctor thrown into it. So it sort of lost something along the way. But when it came back with “Rose,” that first episode 10 years ago today, it was still very very British, and it made no bones about that. And in never really stopped doing that, either. I think that’s what people hooked into. 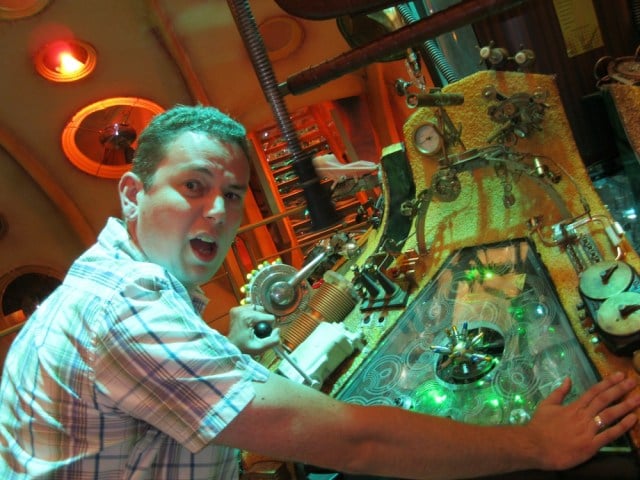 On why he wanted to write the Ninth Doctor:

Very basically, the fact that there aren’t that many stories about the Ninth Doctor. So, I was very lucky that when I started talking to Titan, the editor asked me what Doctor I’d like to write for, and I opted for the Ninth. I’d written for them before, so I knew I loved writing for them. But also, there’s part of me that knows that Well, there aren’t that many stories that have been told, so I know that people will want to probably read them. Because it was only a year on TV, because Christopher moved on, because he’s never come back – people want to know more. And [Titan] were having the same thoughts as well.

What I enjoy most is their dialogue with each other. I mean, they don’t stop taking the mickey out of each other. And there’s a sense of – not one-upmanship, ‘cause that would mean it seems like there’s something malicious in it, and I don’t think it is – but they’re just starting to work out how this is going to work, and you’ve got the Doctor and Jack who are really trying to outdo each other quite a lot, while also having a grudging respect for each other as well. And you’ve got Rose in between who’s having fun having her boys fight over her. There is a problem when you have three people, because you have to figure out something for all of them to do. And so, obviously, the thing that you do is separate them up. But that’s just good storytelling, hopefully. It’s trying to make sure that you’re true to the characters and true to their voices. And I think that one of the things I’ve got to watch out for iis I don’t get too carried away with all the banter! Because it can become really sickening really quickly. So, trying to keep on top of that.

On the creation of The Lect and The Unon – new aliens in the Doctor Who universe introduced in “Weapons of Past Destruction”:

You mentioned in your review that we haven’t seen what’s there yet. Are they robots? Are they people in armor? I’m not going to answer that question right now. [laughs] But one thing I wanted to do was have two warring factions, two races, that you don’t get to know straight away. You start to understand them as the issues go on. From the point of the Unon, who are the space centaurs – which I think everyone is now calling them, which I think is brilliant, because that’s what I called them all the way through – they came about, because I think they wouldn’t be able to do centaurs properly on the TV show. Or, if they did, they’d have one and they wouldn’t be able to have an entire army of them. So when we’re doing the comics, we’re trying to think of things that – no disrespect to the show – would break their budget.

And again, it was the idea of having two races – one who are gleaming and dramatic and sleek, and the other ones who seem stupid and big and bulky – and sort of  playing with the expectations of how the story is going to run.

On working with artist, Blair Shedd:

It’s been a pleasure working with Blair on this, because the design process with him has been fantastic. What I’ve loved about working with him is that he works things out in minute detail of how they work – he’s worked out how that armor works, you know. And there are things you’ll see that armor do, in both cases, later in the series. And he’s worked it out now, so it all follows through. He knows how to ask the right questions as well, and he’s a very practical designer.

Doctor Who: The Ninth Doctor – “Weapons of Past Destruction”, Issue #1 from Titan Comics is available for purchase TODAY. Check it out, and let us know what you think in the comments below!