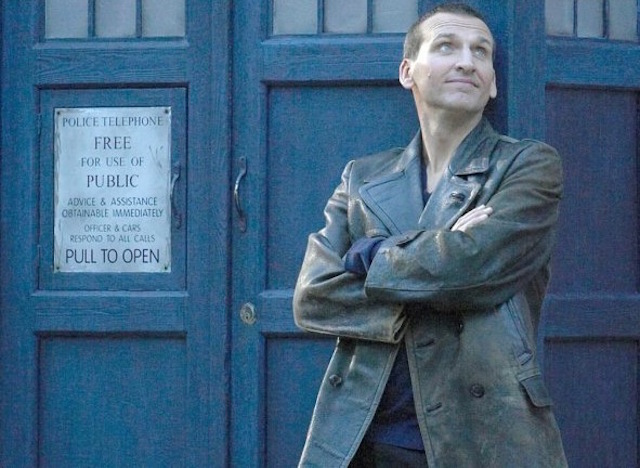 March 26th really should be considered an Official Geek Holiday at this point. It was ten years ago today that Doctor Who returned to television with the Ninth Doctor, and the episode, “Rose.” Radio Times collected birthday cards from Who cast members past and present, including a card from the Ninth Doctor himself, Christopher Eccleston!

And what better way to celebrate than to have the current Doctor discuss this pivotal moment in sci-fi television? BBC America released the video below in which Peter Capaldi talks about the excitement of watching the episode for the first time in 2005. It’ll make the hair on the back of your neck stand on end.

And then there’s this one, courtesy of the official Doctor Who YouTube channel: Capaldi singing “Happy Birthday” to the Doctor with a group of children at the Doctor Who Experience in London. To those kids, this is the only version of Doctor Who that they know!

I didn’t start watching Doctor Who live until toward the end of David Tennant’s run as the Tenth Doctor. But my first Doctor was Nine, and I’m forever grateful to my friend, Lori (hi, Lori!), for forcing her DVDs of the Complete First Season of New Who on me and saying You have to watch this show! It’s so up your alley and SO GOOD! She was absolutely right. From the first few minutes of watching “Rose,” having no prior experience with Doctor Who—no nostalgia to fall back on, no knowledge of the TARDIS or anything else—I was hooked.

Maybe it was the Britishness. Maybe it was the unabashed wonder and adventure of it. Maybe it was the wonderful performances by Christopher Eccleston and Billie Piper. Most likely, it was all of those things, as well as the fact that it was pure, hopeful sci-fi, the likes of which I hadn’t experienced since Star Trek: The Next Generation. It made me want to devour the entire series, and eventually go back and catch up on all the Classic Doctor Who I’d missed (Status Report: I’m just about finished with Tom Baker’s run and ready to head into Peter Davison).

Share your thoughts on “Rose” in the comments below! Were you watching it live on that fateful evening? Did you come to it later? Let’s celebrate 10 years of an amazing sci-fi series being brought back to life for a new generation of fans, shall we?