Go Get Amazed by Interstellar’s Traveling Oculus Rift Experience. I Sure Was.

Outer space should definitely be first on your list of places you'd like to go with VR. 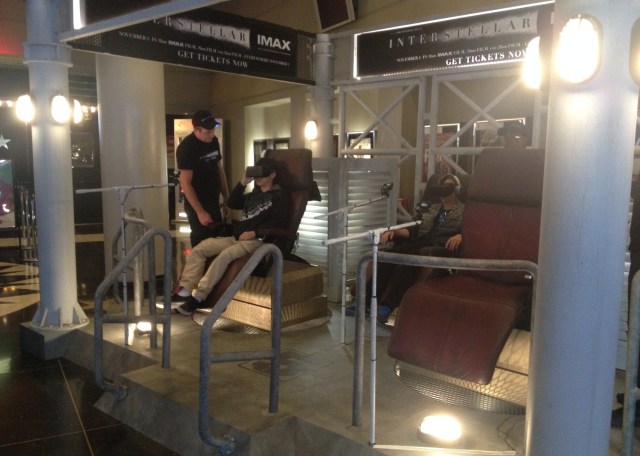 Interstellar doesn’t hit theaters until early November, but IMAX and Oculus Rift have teamed up to bring space to a few movie theaters across the country. If you’re near one of the locations they’ll visit, it’s well worth it both for an Oculus Rift demo and the sensation of actually traveling to outer space.

The tour kicked off today at the AMC Lincoln Square 13 in NYC—where it will be through October 8—and I got to strap on the Rift Development Kit 2 and see what all the fuss about this “outer space” is.

I’ve been dying to try the Rift for myself for approximately as long as it has existed, so the combination of that and the fact that this demo lets you explore the inside of a ship in outer space was more than a little exciting. When it starts, you’re in an on-rails tour through the inside of the Endurance.

Because it’s the Oculus Rift, of course, you can look around any which way you like and take in all the little details, which I was absolutely too busy doing to listen to the voice coming through the headphones telling me something about my mission. “I’m sorry, what? A mission? I can’t hear you over the deafening sound of my brain screaming I’M IN SPACE RIGHT NOW.”

It’s kind of like being one of the humans in Wall-E, because you’re in a giant, comfy chair gliding around the inside of a spaceship. And the chairs aren’t just for show, either. They move, which makes the effect really incredible when the ship’s artificial gravity shuts down halfway through the demo. I hope there’s a cleanup crew standing by, because someone is going to find out they don’t have what it takes to save humanity and vomit on one of these things.

You’ll spend a little while spinning through zero gravity and probably waving your real hands at fake floating objects—which is pretty entertaining to watch from outside the Rift, too—and then you’ll be reminded you’re not just looking around the interior of a spaceship when you look up and see the giant void of the wormhole you’re about to pass through outside the window.

And then it cuts just when you’re dying for more, because of course it does. The experience is short, but if you have any interest in virtual reality, outer space, or Interstellar, it is absolutely worth it—especially because it’s free. You can get in first-come, first-served basis from 11 a.m. to 11 p.m. at the participating theaters:

Interstellar advance showings start on November 5 with tickets available through a dedicated website, which also has ticketing options for the full release on November 7.