Transplanting insulin producing cells from rats to mice isn't human medicine yet, but it's a hell of a first step. 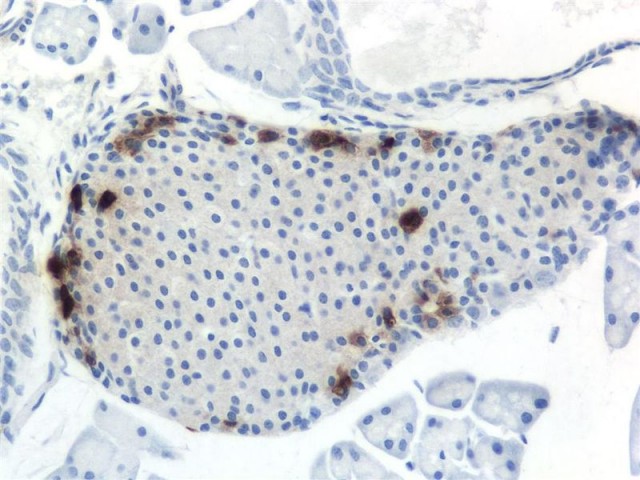 Researchers at Northwestern Medicine have successfully transplanted insulin-producing cells across species lines — removing cells from rats and implanting them in mice — without using drugs to prevent rejection of the foreign cells. While the transplant may seem like a small victory — mice and rats are pretty similar, after all — it marks a significant step forward in interspecies transplants that could one day save human lives by allowing the implantation of insulin-producing “islet” cells without necessitating the use of immunosuppressive drugs that can have dire side effects.

The team, led by Xunrong Luo, used a complex process to keep the immune systems of transplant-recipient mice from attacking the new insulin-producing cells, known as islets. First, the team injected the mice with dead splenocytes (white blood cells that occur in the spleen and liver) from the donor rats. Scavenger cells in the donor mice mopped up those dead splenocytes, but retained fragments of them on their surface. Then, when the insulin-producing islet cells were injected into transplantees, the scavenger cells were less likely to recognize the new cells as foreign invaders and attack them.

Some mice, though, were still showing signs of rejecting the new cells, which led researchers to use a one-time only method to kill of white blood cells in the mice while the new islet cells were injected. When the white blood cells replenished later on, they came into an environment already containing the islet cells, which were already in the body and producing insulin, and did not attack them. Mice who received the transplants lived as long as 300 days with the transplanted cells and without needing immunosuppressant drugs, making the experiment, reported in the journal Diabetes, the most successful interspecies transplant to date.

While promising, the research is of course still far from making the grade for human treatments. Researchers will be keeping a close eye on their initial test subjects, hoping that the experiments could one day become useful treatments for human beings suffering from Type 1 diabetes by allowing the transplant of pig islet cells into humans. When it does, though, we just have to hope no one grotesquely abuses the research to create a hybrid pig-boy.

(via Science Codex, image via Wikipedia)