U.S. Wants to Wiretap the Internet 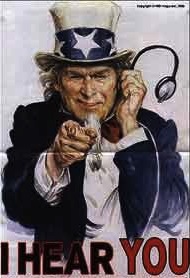 A bill that the Obama administration plans to submit sometime next year would require all communication services, even smart phones, Facebook and Skype, to be “technically capable of complying if served with a wiretap order,” including “being able to intercept and unscramble encrypted messages.”

The reasoning behind the proposed bill, federal officials claim, is as society uses modern communication technology more frequently and departs from relying on phones for their communicative needs, this leads to an “erosion of their investigative powers.”

The Federal Bureau of Investigation doesn’t view the proposed bill as an expansion of authority, but more as keeping up with expanding technology and avenues of communication. Valerie E. Caproni, general counsel for the FBI explains, “We’re not talking expanding authority. We’re talking about preserving our ability to execute our existing authority in order to protect the public safety and national security.”

Though the FBI, the Justice Department, the National Security Agency and the White House have all met to discuss and develop a solution to the problem of “dwindling surveillance,” certain important facets of the proposed plan are lacking details, such as what exactly classifies a company as a provider of communication.

Some of the proposal’s likely requirements include:

People are finding other issues with internet wiretaps that aren’t even related to privacy, such as Columbia University computer science professor Steven M. Bellovin, who suggests that if communications technology is legally required to contain backdoors for government surveillance, hackers would have no problem finding and exploiting said backdoors.