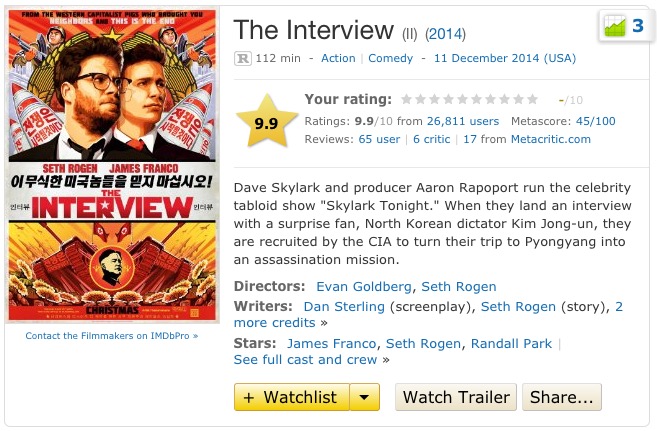 The Interview has received a resounding “not worth all the fuss” in reviews from critics, but its cancellation has been good news for the movie’s audience ratings. If North Korea was already going to get mad about James Franco and Seth Rogen trolling them with a movie, the Internet will make them livid.

Which is probably because they’ve never seen it—not just because it sounds like the movie just isn’t very good, but because there’s nothing like telling people they can’t have something to make them want it. IMDB’s rating of the movie from 26,435 users (as of this writing), despite that most of them likely have no way of seeing it, have been hovering around 9.9—and even briefly hit a perfect 10—for days.

On Rotten Tomatoes, where the movie holds a slightly lower score of 4.2 out of 5 stars in user ratings, the movie has a dubious 53% of positive reviews from critics, but now that the movie is being withheld, it’ll enjoy way more popularity than it every would’ve attained on its own.

Meanwhile, the North Korean government continues to be pissed off about it, apparently oblivious to the fact that they’re just making people want to see it more. They’ve done some more foot stamping in recent statements, and CNN says they called the United States a “cesspool of terrorism” after president Obama formally accused North Korea of being behind the Sony Pictures hack.

Yes, international relations have basically boiled down to this:

Because of James Franco and Seth Rogen, which is kind of fitting when you consider the likely maturity level of the movie that started all the commotion in the first place. Expertly done, gentlemen. The Internet will take it from here.

(via The Verge, image via screenshot)