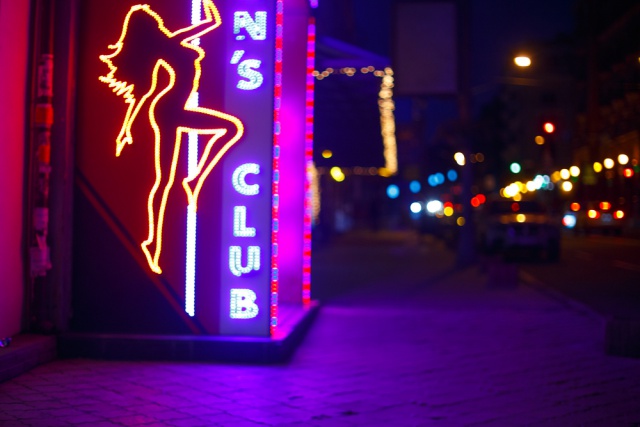 There is a battle growing between exotic dancers and bartenders in the NYC scene that has made several working women go on strike. The conflict is the result of a new Instagram culture that has allowed female bartenders to market themselves as equal draws for crowds as the dancers themselves.

In a report by The Washington Post, a blogger who blogs on the club business under the name of Urban, described this new trend that has taken over two of New York’s best-known clubs, Aces (now shut down for various violations) and Starlets.

“How both of these clubs are set up is that the stage is actually behind a bar that wraps around it. I found this really weird considering the dancers were pretty much inaccessible unless they came up to you personally for a lap dance. What blew my mind though is pretty much all night rather than serving drinks, the “bartenders” were shaking their asses to have the dudes sitting around throw money on them.”

The result is that strippers are no longer being able to get the full attention of clients as before, having to compete for money with these “Instagram famous” bartenders for attention, while the bartenders get more privileges than the strippers.

Strippers have to pay “house fees” at the clubs where they work. The Post reports that these fees can range from $50 to $150-200 during big party events, while bartenders do not have to pay fees. In this war of wages, the clubs tend to side with bartenders, because they have been serving as free publicity:

“The shift began about five years ago, which is when the Instagram ‘models’ with large social media followings calling themselves “startenders” started to be hired in the urban clubs primarily in Queens and Brooklyn. Club promoters stopped seeking the best mixologists and started hiring from Instagram, based on a particular kind of look and followings.”

Many of these “startenders” are white and Latina, whereas the strippers are mostly black women. One dancer who goes by the stage name, Panama got into a conflict with a “startender” after she saw one pick up tips that should have belonged to her. While the security tapes proved the money should have been hers, the owners said “there was nothing they could do” and she was forced to eat the $400 loss that she had been expecting to bring home. That is what forced her to go on strike.

DJ Kay Slay wrote about this issue on Instagram and how this is part of the changing culture of the clubs:

“There’s always been racism in the strip club business he agreed. But “we all have to face the fact that it’s a new day. It was a time where bartenders were only allowed to serve drinks and didn’t wear the same attire as the dancers. The ladies did not change that rule,” he wrote, “the clubs did. And social media made it where some promoters (not all) will use popular ladies who have never bartended in their life, to bartend at their events,” using their “IG celebrity to make their fans come out on their nights. … Personally I feel they should drop both titles ‘Strippers and Bartenders’ because it’s all the same s‑‑‑ now!”

Sean Simmons, promotional director for Aces, said the strike is “nonsense” and that he employed “all ethnicities” as dancers and bartenders:

“The whole industry itself has changed. Some clubs are bartender-driven, but that’s just because the bartenders are beautiful women.” Simmons said that there should be rules and regulations between dancers and bartenders, but said, “Nothing will come from the strike.”

Yet women like Panama are hoping that the strike will lead to some sort of action being taken, “No matter how people may perceive your work environment, a work environment is a work environment and everyone needs to be respected and treated equally. If there’s something you can do to help or change your establishment, you should do it.”

The unfortunate reality is that this strike, which has been going on for about a week, will most likely not get the support it deserves. Sex workers and the services they provide are not seen as important, but the reality is that these women are providing a service and deserve to be paid for it. It also seems as though the “startenders” are being able to provide similar services as a stripper without having the stigma of being actually taking on that label. Sex work is work and the best way for both of these groups of women to continue making money is if clubs come up with rules that will ensure no one is getting shortchanged.