Get to Know GPS Geocaching Game Ingress | The Mary Sue

Ingress Diaries: In the Cemetery, At Midnight, with the Flashlight

I startle easily. Really easily. And I have a vivid imagination. So, when I’m parked in a cemetery at midnight and the wind makes a tree rustle and drop acorns on the ground, I imagine that I’m being surrounded by a pack of werecoyotes bent on slowly eating my face off. Why then? Why would I do this to myself? What am I doing parked in a creepy cemetery at midnight, gripping my cell phone in one hand and one of those giant flashlights that doubles as a bludgeoning tool in the other? Well… I’m playing a game called Ingress.

You see, the Smurfs took our farm earlier in the day, and I can’t stand seeing all of that blue on the Intel map. It’s gotta go. And Agent ArielSkye is just the badass level 10 agent to do it. (Yeah, my agent name is ArielSkye, and yes, I did name my badass level 10 Enlightened agent after my favorite Disney princess and Skye from Agents of Shield. Criticize me and watch me the-opposite-of-caring. :-)) If she doesn’t fall prey to the pack of werecoyotes first. And if she can find another Agent to join her to be coyote bait—I mean, a buddy system. 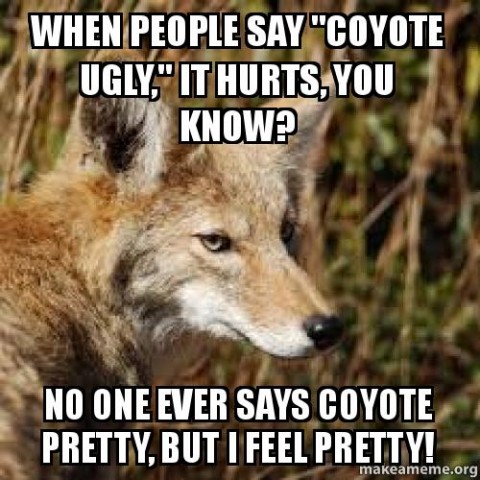 So… what the heck is Ingress, and why do I play it?

Ingress is a GPS-based augmented reality MMORPG that is played on a cell phone. Niantic Labs created it and marketed the concept to Google, with the game originally only being available on Android devices. Just this year, an Apple version became available as well. You can check out their official website for live events and access to the media files that explain the backstory.

But here’s my explanation: Ingress is like the love child of geocaching and Capture the Flag with a cool sci-fi backstory thrown in to appeal to Nerdmuffins like me. The basic premise is that this… entity, or alien race known only as “The Shapers,” has “gifted” our world with Exotic Matter (known as XM). This XM concentrates in areas of cultural, historical, or artistic importance, like parks, old cemeteries, statues, and historical buildings. Within the game, these places are known as “portals.” Gameplay involves going to portals in real-time and capturing them for your faction, of which there are two: The Enlightened (green, often called “frogs”) and The Resistance (blue, often called “Smurfs”). A portal can be green or blue, indicating that it’s owned by one of those two factions, or a white-ish gray, meaning that it’s unclaimed.

In the game, there are resonators, which you can think of as the “flags,” and bursters, which are basically like the “guns.” If Agent ArielSkye is walking to a restaurant for lunch and comes across an unclaimed portal along the way, she can deploy resonators to claim that portal and turn it green. And she does. If Agent ArielSkye encounters a blue portal, she can use her bursters and blast the blue right off of it, deploy resonators, and claim the portal as her own. Which she will. She’s cool like that.

There are other aspects of gameplay—you can put mods on a portal that make it harder for the other faction to take it down, you can farm for keys and inventory, you can play cooperatively to create large fields or long links, or you can travel out of town and collect unique portal keys. You can also communicate with other players via an in-game chat, so smack talk is totally a thing. For example:

AgentSmurfyWhinypants: You destroyed my Guardian Portal! Whyyyyy!!!!
Agent ArielSkye: Your “Guardian Portal” was in plain sight. Off of a highway. In a parking lot. Do better next time. I’m helping you grow.
AgentSmurfyWhinypants: I’m going to find your portals and turn them blue!
AgentArielSkye: Go ahead. I’ll take them back and get more points to level up. You’re so helpful! Thanks, man!

Some cool things about Ingress:

1) I walk more. I walk to lunch so I can play Ingress along the way. I park downtown and walk around to farm some inventory and level up. I meet up with other Ingress players to walk around together. Basically, it’s making me more active and helping me meet more local nerds to chill with, and those are some really good things.

2) I am now much more aware of parks, monuments, and general cool stuff in my area. There are statues here in my town I never knew existed. There are parks I have explored that I never would have been to before. And there are restaurants I eat in because they are portals, and I can put a multi-hack on it and hack away throughout my meal. And I do.

3) Local groups of players are supportive and generally cool. The Bloomington Enlightened communicate with each other via the in-game chat and also via Google Hangouts. We rush to the rescue of other Agents who are trying to make something or take something down. We have parties and cookouts. We help noobs level up. When my awesome cat Valentine passed away a few months ago, the local Enlightened group got me an official Ingress poster, and everyone signed it (real names and game names) with their with condolences. Seriously.

4) When I first started playing, I was one of only a few lady players in town. Now we are many, we travel in packs, and we plot strategy. Diabolically. To quote Kefka, “Bwa ha ha!”

5) Gameplay is vastly different depending on whom you play with. One of my friends likes to take trips out of town and use the game to direct us to places of interest. A couple of friends and I like to walk around downtown and reinforce existing green portals and make links and fields. When I play with my brother, he likes to plot out ways to make giant fields that cover the Intel map with green. My mom plays sometimes as well, and she enjoys the local history aspect—submitting new portals for consideration and writing good descriptions of historical places. There are official events called Anomalies that players can engage in as well.

6) I have a lot more weird phobias after dark than I ever thought I did. I’m a night owl, and I do a lot of my Ingress playing in the wee hours. I never knew that I was a person who worried about wild animals leaping out of the forest and into the open window of my car. Now, I know this about myself. I keep the window up to block werecoyote access to my face. Problem… solved?

7) I take the long way to get places. By the “long way,” I mean “the way with the most portals along it.” Ingress obsession can cause some delay in getting from point A to point B. Especially if you encounter a blue portal and have to pull over to take care of things. :-)

8) Generally, I play smart—I don’t climb fences and trespass or tempt fate by crawling into potential werecoyote dens. If I’m going to be out in the dark for a long time, I tell people where I’m going. It’s usually more fun to play with friends, and you waste a lot fewer resources if you’re not using all of your own resonators and bursters to deal with enemy portals. Two of my friends have serious safety concerns about the game, but so far, I have not ended up dead in a ditch or been turned into a faceless werecoyote. Just be sensible and don’t do stupid things like hiking alone in a thunderstorm while holding a metal rod aloft, challenging Zeus to strike you down.

9) The game is played internationally. There have been some really cool images created with both factions cooperating. Especially in Ukraine:

This is just… neat!

10) I chose Team Green. You don’t have to. Even if you decide to be a Smurf, you’re going to have fun, make friends, and explore. And, without Smurfs, us Frogs would be kind of bored. It takes all kinds.

So, if you decide to become an Ingress Agent after reading this article—have fun! Explore, make friends, and carry a big flashlight. In case of werecoyotes. Just because they’re not real doesn’t mean they’re not lurking behind a tombstone, ready to leap out and eat some faces! 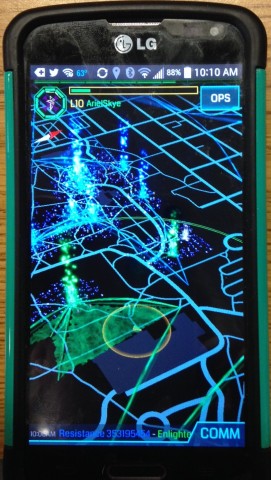