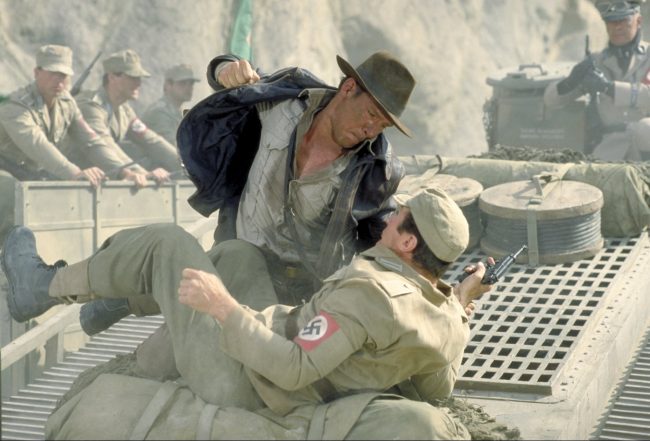 This. Just more of this. It’s not that hard.

It’s a simple, straightforward lesson that apparently needs more reinforcement. On that note, an announcement on the Walt Disney Company website revealed that the oft-rumored and much-alluded-to Indiana Jones 5 sequel is now officially confirmed, and on its way for release in 2019. It reads, in part:

Indiana Jones will return to the big screen on July 19, 2019, for a fifth epic adventure in the blockbuster series. Steven Spielberg, who directed all four previous films, will helm the as-yet-untitled project with star Harrison Ford reprising his iconic role. Franchise veterans Kathleen Kennedy and Frank Marshall will produce.

There’s a lot to be said for the pretty solid names already attached to the project. It’s been nine years since Crystal Skull, and by the time this movie rolls around, that’ll blossom to a full on 11. Without harping too much on Crystal Skull‘s, uh… not-so-good plot, it’s probably safe to say that an announcement like this definitely feels a bit polarizing. Either you’re really into this news or you’re not, it seems.

Obviously there aren’t too many details or anything regarding the plot, as it was only just announced. But looking at past news regarding the then-potential sequel, we know a few things for sure: Spielberg isn’t interested in killing off Ford at the end of this sequel, John Williams is also supposed to return, and so is Crystal Skull‘s screenwriter, David Koepp. One hopes that Koepp has maybe learned a thing or two from the release of Crystal Skull and has a good story in mind.

Anyway, my fingers are crossed. If this follows the traditional Indiana Jones sequel arc of Good, Bad, Good, Bad, then this movie’s guaranteed to be good… right?