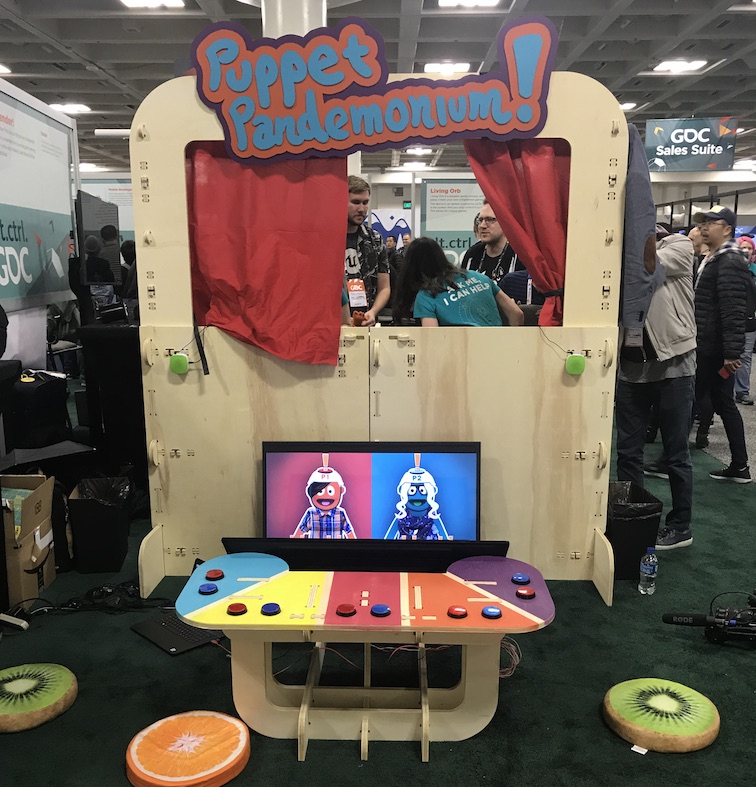 At this year’s Game Developers Conference, I got the chance to try out a few of the neatest new indie games coming out later this year. So, without further ado, let me present to you (in no particular order) some of the most outstanding indie titles at GDC 2018.

Children of Morta is a hack’n’slash that harkens back to some of my own first gaming memories playing Diablo on my first PC. The story centers on the lives of a family of adventurers, the Bergsons, all of whom are protectors of a mystical mountain. As the mountain falls to corruption, it’s left up to them to drive out the darkness and the corruption as they explore the mountain they call home. It’s a pretty tried-and-true narrative, but what really sets Children of Morta apart from similar games in the genre is the way in which it reimagines some of the genre’s longstanding tropes.

Take, for example, the way in which it breaks down its character classes. All of the members of the Bergson family represent a play on the traditional fantasy classes. I got to try out playing as the daughter, who is a magical, fire mage-type of character. HP-wise, she’s fairly squishy, but she can nuke with the best of them. Her auto-attack had her shooting fireballs, but she also had a few other tricks up her sleeve, including creating a duplicate decoy (which could explode after I picked up a specific power-up), a destructive hurricane, and a short teleportation power. As well, as I racked up more and more monster kills, her auto-attack would power up, becoming a kind of powerful, room-clearing laser blast.

The demo only had two playable family members: the young fire mage daughter and her traditional sword-and-board wielding father. Eventually, they expect to have at least six or so total characters, all of whom also play on the traditional fantasy class tropes. As well, the art style is completely gorgeous pixel art. Any given frame of the demo I played could have easily been a still work of art on its own for sure.

So, Earthfall has actually been out for a while as an Early Access title on Steam. But I got to check out the Xbox One console version at GDC, and I have to say, it’s a pretty solid port. Graphically speaking, the game is gorgeous, with aesthetics that make me think of a prettier Half-Life 2. In fact, that comparison may very well be one they were aiming for, as the developers and the CEO present at the demo told me that they looked to Left 4 Dead as a point of inspiration. After they mentioned that, the parallels became even more obvious. The basic structure of the game lines up neatly: it’s four players fighting through an alien invasion, typically over a large map where they have to accomplish a bunch of objectives (and, inevitably, sub-objectives when things “go wrong”).

For the most part, the bot AI for your three compatriots (if you’re playing solo, like I did) is fairly well put together. But I’ll say I did actually end up running into a issue of sorts, where the bots ended up getting stuck in a room while I was knocked unconscious elsewhere, effectively ending my demo. It was a bummer, but up until that point, the game was a fairly satisfying fix for the empty void that was left over in my heart after Left 4 Dead stopped development so long ago.

Speaking of Left 4 Dead-esque shooters, Strange Brigade is another one that certainly put its own unique spin on the cooperative shooter genre. For starters, its setting is pretty novel: it borrows heavily from the pulpy, 1920s and 30s “talkies”-style of film, complete with an announcer who provides a kind of running commentary on your antics in the game. Here, you play as one of four different crew members of archaeologists (or, more precisely, tomb raiders) in search of treasure in ancient temples and the like. of course, it’s not quite as easy as that, as undead mummies and soldiers all rise to stop you from getting away with anything. You know, as they do.

Each character has their own unique skill and power, as well as their own complement of weaponry. I played as a Rosie the Riveter-style engineer with a double-barreled shotgun. Her special power had you picking up an enemy with telekinesis, setting them on fire, then throwing them back at some enemies, only to have your on-fire enemy explode and knock out even more of them. Additionally, there are a few traps strewn about the levels that you can trigger with a well-timed shot, which leads to a very satisfying end for the vast horde you’re sure to be kiting just about the entire time.

All told, the game is a pretty fun entry into the genre, though the aiming felt a little stiff, and took some getting used to. This led to some pretty puzzling deaths in the first part of my demo, but once I got a hang of things, I ended up scraping my way through just fine. Still, it’s something to note, and given that they don’t exactly have a release date yet, it seems like there’s plenty of time to tighten things up a bit.

Church in the Darkness (PC, PS4, Xbox One)

Church in the Darkness caught my eye mostly because its story revolved around cults, which is a subject I personally find to be super fascinating. In the game, you play as an ex-law enforcement officer whose nephew has joined up with an extremist religious cult in the jungles of South America. Your goal is to find out where your nephew is, infiltrate the cult compound where he’s moved to, and finally, decide whether you’ll let him stay or not.

The trick is that each time you load up Church in the Darkness, it’s a different game, with the two charismatic leaders of the cult presenting different arguments for what being in their organization actually means. For instance, one of the leaders holds up a very religious, dogmatic belief system, kind of a typical “cult leader” in the stereotypical sense of the title. The other stands as kind of a revolutionary, a person resisting against the political environment of the 70s, which serves as the game’s backdrop. Depending on the choices you make, and depending on what the game rolls up for you when you start a new game, either leader could end up being the true representation of that cult.

It’s a pretty intriguing story, and it’s backed by an engaging, stealth-focused game that really plays up the paranoia factor that comes with infiltrating.

I’m having a hard time describing exactly what Pig Eat Ball is. It’s a puzzle game, to be sure, but its puzzles have you playing as a pig trying to eat all the tennis balls on a given map. Catch is, you grow bigger as you eat more and more tennis balls, and in order to squeeze through the tiny doors between certain rooms, you have to literally vomit out all the tennis balls you’re packing. Oh, and then you have to eat them all back up again if you want to finish. It’s kind of a nightmare if you’re one of the many, many, many people who get squeamish about vomit, but thankfully, it’s not like it’s photorealistic vomit or anything. God, can you imagine?

Anyway, when I tried it out, I was actually a little skeptical about the concept. The developer who was demoing the game kept telling me to give it a chance, and that he understood it was a weird concept and all. I’m not one to shy away from weirdness, so I was down. Put simply: I was a bit surprised at how much fun it turned out to be. It was silliness for silliness’ sake, and because of that, it was a breath of fresh air, especially against the tiring backdrop of shooters and the like. This is one you’ll want to check out if you’re looking for something nice, fun, and easy to play at the end of the day when you need a good laugh.

Okay, to be fair, Puppet Pandemonium isn’t exactly the kind of game you can take home and play on your couch. It’s actually an entry into the alt.ctrl.GDC showcase, which shows off imaginative, super-creative alternative game controllers for indie games. Puppet Pandemonium utilizes—you guessed it—puppets, who are controlled and voiced by players. There’s even a full-on puppet show-style “stage” for the puppets, and set before it are a few sets of buttons that allow for audience participation. Half the fun is watching the player puppeteers work their way through the hilarious script, which covers things like streaming, advice on not shooting your grandmother, and (surprisingly enough) net neutrality and the rise of fascism. It’s a show within a show, and it’s honest fun for anybody involved.

This is another alt.ctrl.GDC entry, and it follows in the footsteps of Roflpillar, a game that had you crawling into a sleeping bag to control a caterpillar of sorts. In Unicornelia, you play as a young unicorn working to take care of herself and her daily self-care needs, like paying the bills, taking a bath, calling your mom, and things like that. Taking care of those needs comes in the form of closing out pop ups on a desktop computer, only instead of a mouse, you use the horn strapped to your head to push buttons that close the windows. Oh, and you’re also on your hands and knees inside of a small pop tent with your head sticking out one end.

Unicornelia drew tons of attention from folks passing by, if only because of the purple-maned tent that serves as the “controller” for the game. It’s a unique experience to be sure, and while there wasn’t a huge, bombastic storyline or anything like that, it managed to deliver a good lesson about self care in a very novel way.