Interview: Inbar Lavi Fills Us in on Lucifer Season Four and Her Take on Eve If the first three season of Lucifer proved anything, it’s that you can’t keep a good devil down. After a heartbreaking cancellation last year by Fox, fans rallied, and Netflix swooped in to save the supernatural procedural and resurrect it on the streaming platform. The ten-episode fourth season drops on Wednesday. I’ve watched the first six episodes, and I’m happy to report this is the best the series has ever been.

Season four is streamlined and full of emotional highs and hysterical beats that take advantage of the lack of network TV rules. It’s basically the show you love, trimmed down and with 200% more toned butts, but aside from the partial nudity, the biggest addition to this season is Inbar Lavi as the first woman, Eve herself. Lavi took some time to chat with The Mary Sue about joining the show and playing the original sinner.

The character of Eve—created from Adam’s rib to be a helpmeet—could be boring or even campy, but the Lucifer writers and Lavi have created something far more complex and fun in this character. She’s what Lavi calls “the original sinner,” and that taste still defines her.

“She took that bite; she went after her heart’s desires and curiosity,” Lavi explained. “Because of that, she was kind doomed to spend a lifetime in heaven with Adam, and she just got a little bit bored.” That boredom is what brings her back to Earth and into the orbit of Lucifer Morningstar (Tom Ellis). “She’s looking for that passion again, that fire,” Lavi said. “Whatever that feeling was that Lucifer jumpstarted way back in the day. And so she’s coming down to earth to get another taste.”

If it’s not clear, the apple in the garden of Eden in Lucifer’s take on the story wasn’t so much a fruit but something, as Eve puts it in an episode, “more like a banana.” Lavi went on: “Like I said, she is considered to be the original sinner, but I’ve always been very curious about that statement. If you think about it, she was brave enough to follow her curiosity. Why should we consider thirst for knowledge and sensuality and exploration sinful? When I think of Eve, I just think of the world that she carries around inside her, the yearning for her own future. The courage to no longer be heavily burdened by judgment and error.”

That complexity makes Eve a great foil for Luci, and him the ideal partner for her. She’s looking to find herself and her purpose as someone who was created to serve and be docile. “Obviously she finds him very exciting and very exhilarating, just like anything that’s a little bit unpredictable and maybe even a little bit naughty and forbidden,” Lavi said of Eve’s view of Lucifer. 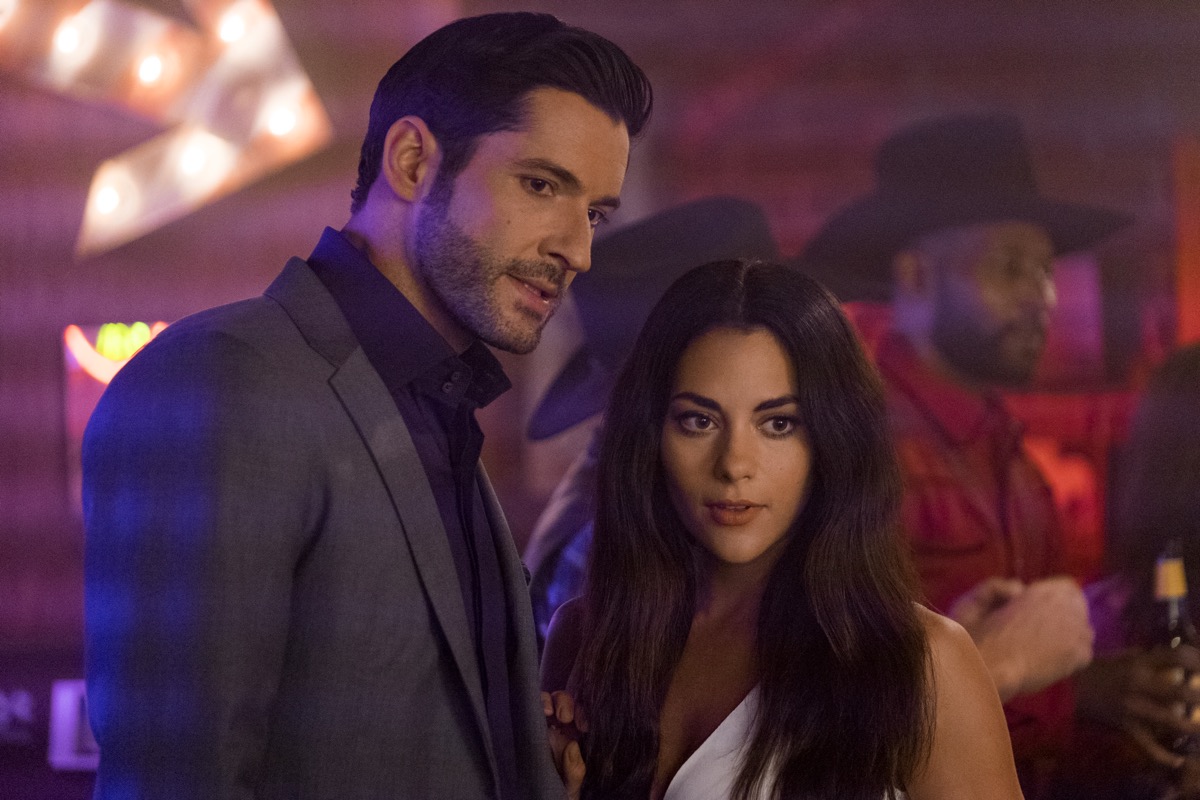 “For me, one of the most fascinating aspects of the show is the struggle between good and evil, the push and pull between purity and desire, and the garden of Eden represents just that.” Eve is the ex who comes looking for fun and ready to go wild when Luci is dealing with the consequences of last season’s big cliffhanger—Chloe (Lauren German) seeing Lucifer’s devil face and realizing that he is, indeed, the actual devil.

But how does Eve get along with those other folks in the devil’s life? In a pleasant twist, instead of tired female rivalry, Eve gets along with Maze, Chloe, Ella, and others. Eve’s instinct to be a caretaker takes precedence over any jealousy, and it’s very refreshing. “She doesn’t see anyone as an obstacle or a challenge or an enemy,” Lavi explained, “and that was so fun, because I got to play with all these different characters … Everyone is just an opportunity to shake loose and just have a good time.”

It’s even surprising to some characters how much they like Eve, but it’s not a shocker to the audience, given how ebullient, innocent, and fun she is. “My biggest lesson from Eve is compassion. She’s someone who has been damned for making the biggest mistake,” Lavi elaborated. “Because of that, she is able to forgive easily and accept easily and let go, because she understands nothing really comes from evil.” That compassion deeply informs her relationship with Lucifer in surprising and unexpected ways.

Speaking of that charming prince of darkness, playing Lucifer’s gal pal meant that Lavi spent a good hunk of her scenes with Ellis, who she didn’t meet until after casting, which went quickly in Lavi’s direction. “I actually didn’t audition,” she shared. “One of the writers of the show … was a big fan of Imposters and he was basically writing Eve with me in mind, and then when the time came to cast, he just pitched me as the first woman of mankind.”

Eve has great chemistry with her old flame, Lucifer, and about Ellis himself, Lavi had nothing but praise: “I will never really express how just genuinely, completely in love I am with [Tom]; with his work, with his kindness, with his talent and with his gigantic heart. He’s just a big goofball caught in this body of a sex god, and just a pure, genuine soul that just wants to give and be good and make everyone happy. Just the best. I got so lucky.”

Lucky definitely describes how the cast felt while filming, and the feeling on set was one of deep gratitude, according to Lavi. “They worked their asses off for three seasons. They built this family and got attached, and then it was taken away,” she explained, “and then all of a sudden, thanks to the amazing fans of the show and their support, they were brought back. There was this genuine feeling of resurrection on set.”

It certainly shows in the product, which brims with a surprising amount of joyfulness for a show about Satan solving murders. “When someone comes to work feeling grateful to be there and lucky and excited and happy,” Lavi said, “only good things can come from that. This season was just sprinkled in with so much love. They really wanted to make this season the best one yet for the fans.”

If that was the goal, the cast and crew have certainly succeeded. Season four might be the best yet, and I hope it’s only the first of many on this new platform. Fans are sure to enjoy the journey, and I think Eve, and Inbar Lavi, will soon be the apple of their eye.

All ten episodes of Lucifer season four will be available on Netflix on May 8.