In Praise of the Difficult Female Friendship

There's a fine line between catfight tropes and real empowerment. 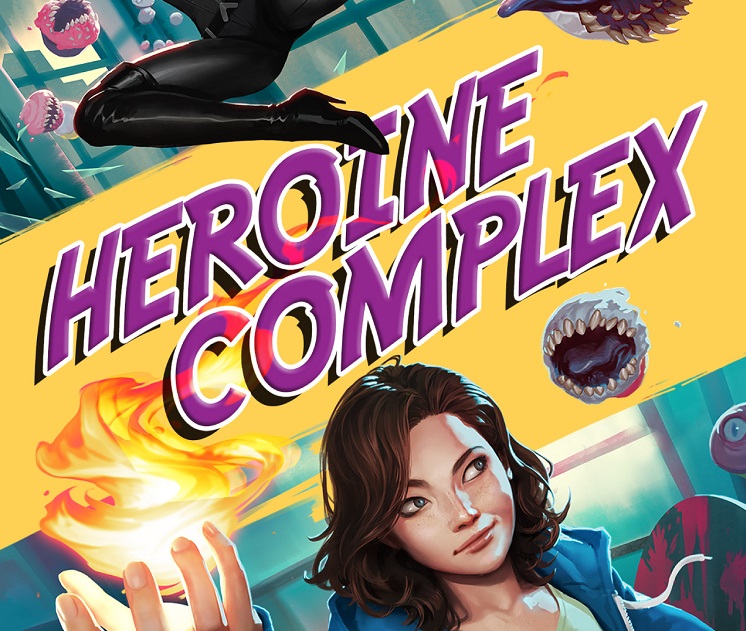 I love a good female friendship story. Whether it’s about sisters-in-arms going into glorious battle together or childhood besties who share a pair of traveling pants, I’m there, ready to gobble it all up like magically delicious yet empowering candy. But I’ll confess I have a special place in my heart for a certain kind of female friendship story—one that’s tricky to pull off, yet so very rewarding when done well. Call it the Difficult Female Friendship story.

This is not a steadfast bond that starts strong and never wavers. In this instance, the duo often begins as adversaries, then grows to love and respect each other deeply—but their friendship is constantly in a fragile place as they struggle to understand each other, butt heads, and must work their way through the various complexities of being human in order to have a true connection.

Of course, telling the Difficult Female Friendship story requires finely tuned execution—otherwise, the conflicts these characters get into might end up looking like a bunch of tired-ass catfighting tropes. One of my favorite classic Difficult Female Friendships is Betty Cooper and Veronica Lodge: the sometimes BFFs/sometimes enemies/sometimes frenemies in Archie comics. Whenever Archie is present in the story, both girls’ focus seems to go immediately to fighting over him. As a kid, I loved the stories where he was barely involved, when Betty and Veronica just went shopping together or whatever. These tales illustrated their clear class/personality differences, but offered the hopeful message that they were friends anyway. 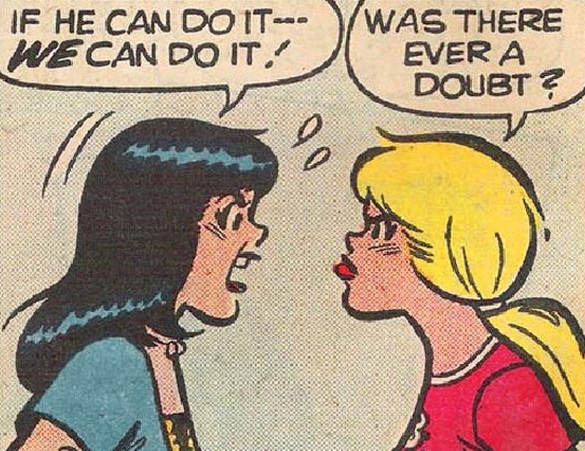 That said, I suspect the best Betty/Veronica stories are somewhere in the middle of these two extremes—as an adult viewer/reader/consumer of entertainment, I recognize that even though I root for the two characters to get along, the conflict between them is a big part of what’s drawing me into the story so much in the first place. It helps me invest more, I think—and makes the story more nuanced—when the central conflict is over something other than a dude. I still wish, for instance, that Jean Grey and Emma Frost (two of my favorite characters in Marveldom) had been given something to fight over that was not Scott Summers; my not-so-secret wish is that someday there will be an X-reality where they bond and have fabulous adventures together and become the ultimate Difficult Female Friendship. (Editor’s note: this kinda-sorta happened after Teen Jean met Emma a while back, but then dimensional stuff happened. WE CAN STILL DREAM.)

One of my favorite examples of a nuanced take on this story that actually exists somewhere besides my imagination is Rory Gilmore (Alexis Bledel) and Paris Geller (Liza Weil) on Gilmore Girls. Paris initially views Rory as a threat—and yes, it’s partially over a dude, but it’s mostly because Rory is the rare student with the chops to challenge Paris academically. Paris ultimately comes to realize that Rory—who is also the driven, overachieving sort—is the only one who can truly understand her. And Rory realizes Paris’s socially awkward intensity is actually a great friendship asset, because that intensity means there’s no one who will be more “ride-or-die” for her when the chips are down.

Perhaps the key to a well-executed Difficult Female Friendship story is that the moments of true accord feel satisfying because they’ve been so hard-won—thanks to the characters working through their various issues over and over again, that shit feels earned. Take one of the most tempestuous friend pairings of all time: Buffy (Sarah Michelle Gellar) and Faith (Eliza Dushku) on Buffy the Vampire Slayer. I loved Faith the minute she showed up, and I especially loved how she made Buffy feel like she finally had a peer, someone who truly understood what she was going through as the Chosen One. Their fast, fierce bond was intoxicating; their eventual estrangement, devastating. To this day, all you have to do to reduce me to tears is scream, “Faith! Don’t die!” 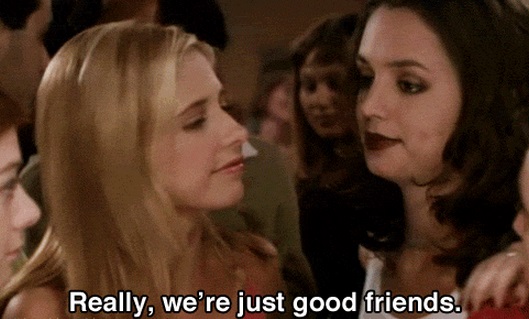 I think one thing that makes them work so well as a Difficult Female Friendship is the fact that Faith’s motivations, even when she ends up on the villainous side of things, are just as well-drawn as Buffy’s. You understand both of them, you feel for both of them. And when they finally come back together at the end of the series, the moment is incredibly satisfying because they’ve worked so hard for it.

One interesting evolution in this type of story is a bond between characters who are able to stay fierce friends while still allowing conflict to exist between them. It doesn’t threaten their bond, it’s part of their bond. This perhaps feels like the most true-to-life version of this concept: a friendship between two complicated people in all its messy, prickly glory. A friendship where you feel like you can be really real with the other person. My favorite recent example of this is one of the central pairings on Jessica Jones: adoptive sisters Jessica (Krysten Ritter) and Trish (Rachael Taylor). In trying to protect Trish from danger, Jessica makes her feel shut out and used—they work through it and reaffirm they would die for each other. But those little prickles and conflicts still exist between them, and that’s totally okay—you get the sense that no matter what they might fight about, they’ll always end up back at each other’s sides.

My novel, Heroine Complex, has a Difficult Female Friendship at its core—the ever-evolving best friendship between put-upon personal assistant Evie Tanaka and her glamorous superheroine boss, Aveda Jupiter (aka Annie Chang). These two grew up together and developed a somewhat unhealthy co-dependent relationship that’s put through a contentious, uncomfortable evolution over the course of the book. I had some concerns while crafting this relationship because I didn’t want the empowering story I was trying to write about Asian-American superheroines—superheroines who look like me and my friends—to devolve into petty catfighting tropes or a tale of women trying to take each other down. But I can’t help but be drawn to Difficult Female Friendships in stories and I can’t help but write them myself, so I looked back through my favorite examples for guidance. There are lessons to be learned about creating two characters people can fully invest in, about making both sides sympathetic, about conveying the fierce love that exists underneath all the conflict.

I think that ultimately, the most powerful lesson is this: many times, relationships are rife with conflict because the two characters involved are so strong, flawed, and heartbreakingly human. They’re nuanced, layered female characters—and it’s empowering to watch them be allowed to just be who they are completely, warts and all.

Sarah Kuhn is the author of Heroine Complex, the first in a series starring Asian American superheroines, for DAW Books. She also wrote The Ruby Equation for the Eisner-nominated comics anthology Fresh Romance and the romantic comedy novella One Con Glory, which earned praise from io9 and USA Today and is in development as a feature film. Her articles and essays on such topics as geek girl culture, Asian-American representation, and Sailor Moon cosplay have appeared in The Toast, Uncanny Magazine, Apex Magazine, AngryAsianMan.com, IGN.com, Back Stage, The Hollywood Reporter, StarTrek.com, Creative Screenwriting, and the Hugo-nominated anthology Chicks Dig Comics. In 2011, she was selected as a finalist for the CAPE (Coalition of Asian Pacifics in Entertainment) New Writers Award. You can visit her at heroinecomplex.com or on Twitter: @sarahkuhn.