In Defense of Geekery: Why Society Needs SF/F 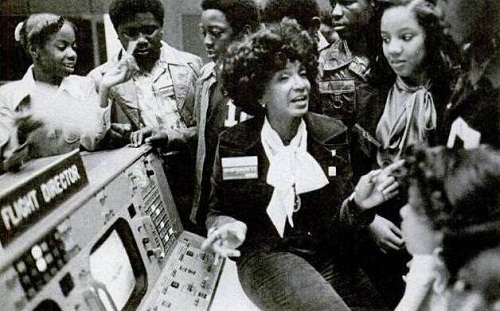 I have recently discovered Star Talk Radio, a podcast by delightful astrophysicist Neil deGrasse Tyson. I’ve been working my way through the archives, finding the show to be good company while I cook dinner. The other day, I listened to “A Conversation with Nichelle Nichols” (aka Lieutenant Uhura on the original Star Trek). I knew from the title that I was going to dig it.

What I did not expect was to find myself standing there, my halfway-constructed lasagna lying neglected before me, as the lovely Ms. Nichols brought me to tears. I was familiar with part of the story she was telling, but…well, allow me to share.

After the first season of Star Trek, Nichols went to Gene Roddenberry and handed in her letter of resignation. She liked working on the show, but she had other offers on the horizon. Roddenberry told her to take the weekend to think it over. That weekend, Nichols attended a fundraiser for the NAACP. While there, she was introduced to a man who described himself as her biggest fan.

When she told him she was planning to leave the show, he said firmly, “You cannot.” By featuring a high-ranking woman of color on the bridge of an intergalactic starship, King said, Gene Roddenberry had “seen the future, and we are there because you are there.” Nichols continued to quote him as saying, “because it’s in the 23rd century…it means that what we are doing today is just the beginning of where we’re going.”

It wasn’t just the presence of a black woman that was important, King knew. What was important was that the character was non-stereotypical. The Chief Communications Officer could have been any race, any gender. But by taking that brave, simple step of breaking the status quo, Star Trek managed to show a wide, diverse audience how easy it was to make social equality a reality.

And that, Dr. Tyson said, “planted seeds within the consciousness of the nation that sprouted later, greater than I think anyone had ever imagined.”

For me, that interview was a validation. I have always known down in my marrow that the books and games I love are important, but hearing that story was the catalyst for me. I could finally point my finger at what I love so much about being a geek.

This is going to require some explanation.

Back in days of yore, I was a theater major. To be more specific, I was a performing arts and social justice major. The program I was enrolled in sought to train students to promote social change through theater. At eighteen, with my head full of art and revolution, I was all for it. Some people might want to do theater just for kicks and glitter, but my department, dude…they were doing important stuff.

About halfway through my college years, the Kool-Aid started to wear off. I recall nights spent with friends at our local diner, picking at fries and sharing a heavy, hopeless silence. We were full to the brim with documentaries and books and plays that were meant to make us get angry and do something about it. We did, at first. After a while, though, we were numb. We’d wind up feeling utterly depressed, thinking, “What the hell am I supposed to do?”

Through all of this, I had my games and comics. They were a balm against the over-saturation of negative imagery and political anger that was wearing me out. I didn’t talk to many of my college friends about my geeky past-times. I mean, after all, I was at school to learn about important stuff. Diving into a game after rehearsal felt like sneaking off for a bacon cheeseburger after attending a vegan potluck. The guilt was doubled by how deeply I enjoyed it.

Eventually, some of us started to question how much good we were actually doing. The average Joe didn’t want to see a show about social injustices. People would only see shows like that if they cared about the issue to begin with. Most people wanted their shows to be fun – ourselves included.

It was around that time that one of my friends said something very smart.

“Isn’t there value in just laughing and having fun?” she said. “What’s wrong with wanting to just make people feel good about life?”

I wore that rationale like a badge, using it to defend my decision to work on musicals and sketch comedy shows instead of crafting the next great protest piece. At times, it felt like a cop-out. I worried that I had become one of those shallow people our professors scoffed at, more concerned with mindless entertainment than doing some good.

Let us return to the present. I have been out of college longer than I was in it. I left my theater career behind about a year and a half ago to do that whole “freelance writing” thing. I write about computers and technology to pay the bills. I write about video games and comics because I enjoy it. I write science fiction that nobody buys. I spend my free time gaming and reading SF/F and watching shows that have lots of magic or spaceships. I find all of this to be entirely awesome. I am happy with my life and the community I have found to go with it.

But sometimes. Sometimes this little tiny voice creeps into the back of my head.

“This?” the little voice says. “This is what you spend your time on? Never mind the fact that people are starving and oppressed and suffering. Never mind that our ecosystem is falling to pieces. Yeah, okay. Enjoy watching A New Hope for the hundredth time. It’s not as if your life is fragile and finite.”

I bet some of you have that voice in your head, too. I bet sometimes you have a hard time explaining to your friends or family why you dig this stuff so much. I bet if you meet someone at a party or go on a date, you give a little self-deprecating smile when you finally get to talk about your own interests. I bet sometimes you think, “I need to grow up.”

Well, stop it. Stop it right now. Our stories are important. I think they might be some of the most important ones out there.