A Picture’s Worth a Thousand Tweets: Images of Science Shows Us What Twitter Really Thinks About Science 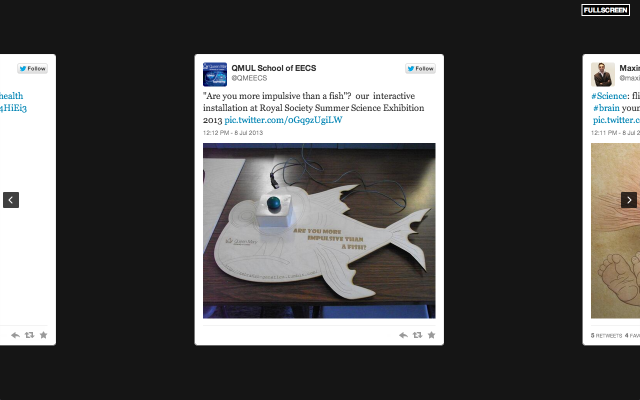 Science, man. Love it or hate it — and most Twitter users do, one way or the other — it’s a pretty inescapable part of everyday life. Well, it is for us, and probably for you folks, too. But what’s life like for people who aren’t as science-obsessed as we are? Story Collider director and Contributing TED.com editor Ben Lillie created a selective Twitter feed to show us, and it’s not as rage-inducing as you might think from seeing the phrase “selective Twitter feed.” No public shaming involved, trust us.

Here’s what Lillie had to say about the project on his official Tumblr blog:

So, here’s a problem. There are a ton of extraordinary scientists, science writers, science radio producers, science video/tumblr/mime people out there who make great things about science. I work with a lot of them, and follow a ton more on twitter, constantly reading/watching/etc.ing the things they make.

And that’s sort of the problem — it’s a bubble. That stream of tweets that I see isn’t what most people see when they think or hear about science. What I’m really interested in is what science looks like to everyone. To the scientists and science writers I follow on twitter, certainly, but also to people who read about science in their spare time, or who haven’t seen science their required freshman class in high school, or who hate science. There is a vast world of experience out there that I have no idea about. What does it look like, out of the bubble?

Lilie was so interested in the idea that he took a cue from Rose Eveleth, who just recently created the I ____ Science page to provide a snapshot into the world of people who claim they love and/or hate it. His Images of Science page operates similarly in that it shows any tweet that  both uses the word “science” and includes an embedded picture, and then presents those tweets in a slideshow that refreshes every 12 minutes or so.

So what does science look like? Apparently it looks like a lot of textbooks, students in classrooms, museums, the occasional porn-bot (because those are just as inescapable as science is), and memes. So many memes.

soMEONE SEND THIS TO MY SCIENCE TEACHER OMFG pic.twitter.com/BqNiSGHoLL

The feed might be a little NSFW occasionally due to those nasty porn-bots, though I’ve been watching it for a while and haven’t seen anything scandalous yet. Other than that, of course, it’s a pretty fascinating look into the depths of Twitter’s scientific mind. It’s also just a little less infuriating than those galleries of racist tweets about The Hunger Games. You know… most of the time.

Correction: An earlier version of this article accidentally referred to the creator of I _____ Science as Rose Leverth, her name is Rose Eveleth.

(Images of Science via Ben Lillie)