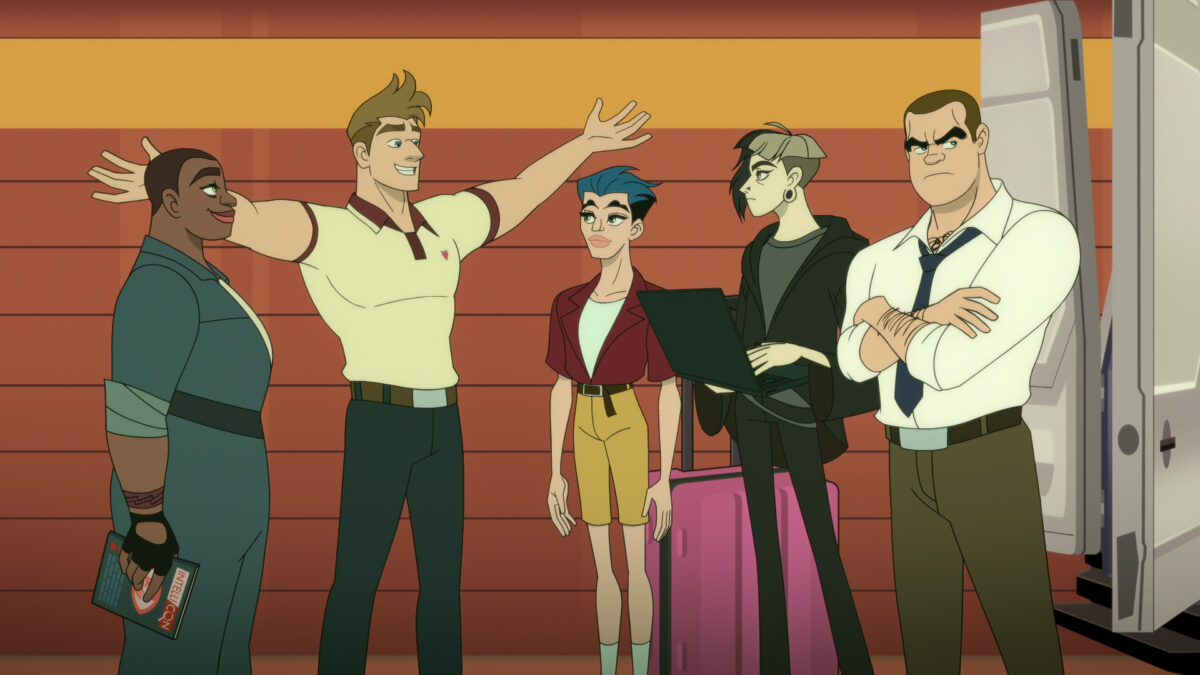 It’s hard to pinpoint exactly when I fell in love with Q-Force. Maybe it was the militia/Melissa joke, or the Eurovision song contest episode. Most likely it was an extended joke riff on the season 5 finale of Buffy the Vampire Slayer that truly sold me. But to be honest, there’s a lot to like in Netflix’s latest adult animated series.

Most people have heard of Q-Force thanks to a wave of negative reactions to the show’s first trailer. Angry keyboard warriors quickly took to Twitter to trash the show, accusing it of pandering to stereotypes. That trailer is not only bad, but it mischaracterizes the series completely. Add to that the impossibly high standard that queer folks have for queer content, and Q-Force was off to an inauspicious start.

But what an unexpected delight this series has turned out to be. Q-Force centers on Steve Maryweather aka Mary (Sean Hayes), the top spy of the American Intelligence Agency (AIA), until he came out as gay. Steve is then shuffled off to a posting in West Hollywood, where he assembles a squad of LGBTQ+ superspies, featuring expert mechanic Deb (Wanda Sykes), master of drag and disguise Twink (Matt Rogers), and hacker Stat (Patti Harrison). After spending a decade in obscurity, the team is promoted to active duty, where they’re teamed with uber-straight agent Buck (David Harbour).

Q-Force could easily be a sister series to Archer, but it bypasses adult animation’s tendency to focus on cynicism and nihilism to create something wholly original: a warm portrait of co-workers who become a surrogate family. The quips fly fast and furious, but they’re never cruel. Q-Force takes the time to establish its characters and their dynamics, making them fully formed instead of half-baked joke machines.

It’s clear that the writers behind the series genuinely love these characters. Series creator Gabe Liedman (Brooklyn Nine-Nine, PEN15) hired queer writers and animators for the series, which gives Q-Force the authenticity and cultural specificity that I didn’t know I was missing. This is a queer show from queer creators for a queer audience FULL STOP.

No one pauses to explain the queer cultural touchstones or the niche community-centric humor. It also allows its characters to transcend and subvert queer stereotypes with breezy humor. Q-Force is also refreshingly sex-positive, with queer sex scenes that are rarely seen on film, let alone in animation.

As we continue to demand more LGBTQ+ representation onscreen, we often fall into the trap of demanding that a queer series or film be everything to everyone. It’s an impossible bar to meet, as the queer community is as varied and nuanced as any other. While Q-Force won’t work for every viewer (and honestly what does), it is smart, funny, heartfelt, and unabashedly queer. And that’s something worth celebrating.

Q-Force is currently streaming on Netflix.