If Ikea Made Vibrators, They’d Probably Make ’em Like This 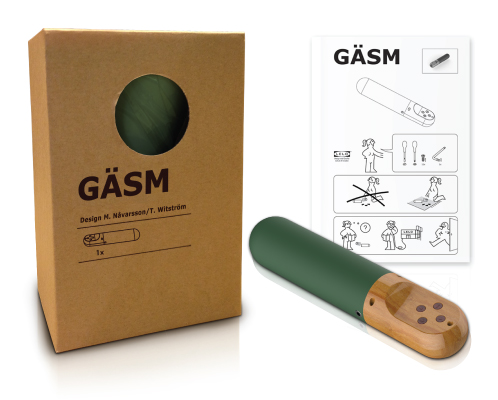 The Gäsm is a limited production vibrator made from 100% recycled materials, including repurposed rubber and compressed wood pulp. And even though it comes disassembled with instructions, and its batteries can be recharged by winding it with an included allen wrench, it is not made by Ikea. It’s made by LELO, a manufacturer in high-end sex toys. But while it’s only available for order until April 1st, it’s not a joke product. Okay, it’s at least partly a joke product, look at it, but, I mean, it’s an actual thing that you can buy. And probably functions as well, but just to make sure, we reached out to our new official sex-toy expert, Iris Explosion, whose day job is working for Babeland, a lady-owned and founded chain of adult toy stores.

An allen wrench? How revolutionary*! As someone who’s always viewed IKEA as Legos for adults, a DIY vibrator sounds pretty exciting to me. Just imagine the anticipation that will build when you’re struggling to put it together. As far as re-purposed rubber goes, you don’t know where those old tires have been, so maybe consider putting a condom on that for extra safety. That will also take care of any extra dust and hair it’ll pick up in storage– rubber attracts lint like nothing else. And be sure to take care during use: if you bear down hard on the compressed wood handle in the heat of the moment, well, you’ve seen how breakable IKEA furniture can be.

For $180, the Gäsm might be outside the price ranges of some folks, but we’re greatful just for the laugh it’s given us as a perfect pastiche of an Ikea product. The allen wrench. The umlaut.