Can Appearances Be This Misleading? IDW, Aubrey Sitterson, and the Cancellation of Scarlett’s Strike Force 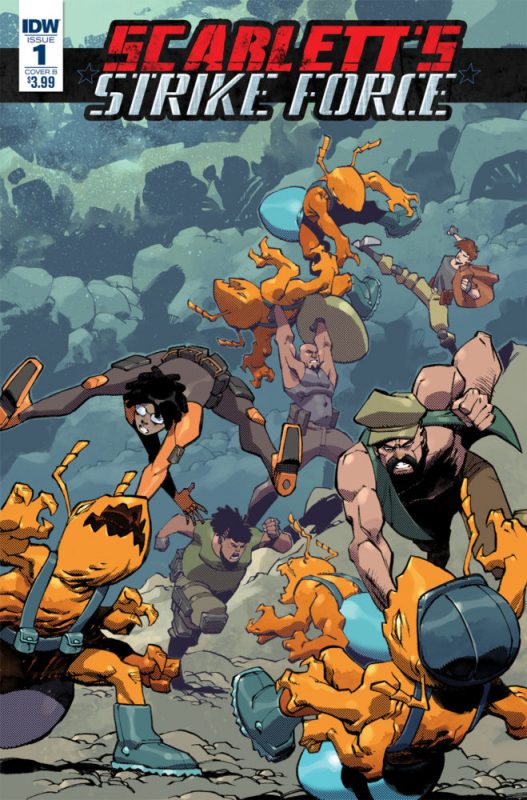 Back in September, we reported on a situation involving comics publisher IDW, comics writer Aubrey Sitterson, and the right-wing harassment campaign responsible for putting Sitterson’s work on the G.I. Joe line of comics in jeopardy. That situation seems to have carried over, affecting a female-led G.I. Joe book that is supposed to be coming out soon. One that’s already been canceled thanks to “poor sales.”

Scarlett’s Strike Force, a new GI Joe title coming out of IDW’s First Strike crossover event, hits stores on December 20th. The deadline for pre-orders isn’t until December 5th, which is next week. And yet, citing “poor sales,” IDW has already canceled the book, which will end its print run after Issue #3.

They claim, of course, that it has nothing to do with any pressure being doled out by a contingent of G.I. Joe fans directing harassment at a specific, outspoken creator with a history of inclusion. Despite the fact that citing poor sales when the pre-order sales period isn’t even over yet and the first issue hasn’t even come out seems a bit ridiculous.

Even worse, reports are that IDW has purposely not promoted the book as hard as their other titles, which is largely responsible for the seeming lack of interest. In an interview with Bleeding Cool, Sitterson explains how he was forbidden from doing anything to promote the book:

“Outside of social media, this is actually the first promotion I’ve done for the book in more than two months. When everything went down in September, IDW told me that if I wanted to stay on the book, I couldn’t do interviews or anything to promote it, and IDW PR even shut down a podcast interview I lined up. Folks were really mad — I mentioned the death threats earlier — and IDW said they didn’t want me rubbing it in people’s faces that I still had a job, so there were a few weeks where I wasn’t allowed to even mention Scarlett’s Strike Force or the First Strike issues that were coming out at the time.”

The interview also points out the fact that in addition to tying Sitterson’s hands, IDW did nothing to promote the book, which they announced September 9th of this year, after Sitterson’s September 11th comment, “a fact made glaringly obvious by the fact that the publisher hasn’t even uploaded the book’s cover to PreviewsWorld, despite final order cutoff fast approaching and other books shipping that week having their covers on the site, and promotion for other books coming out that week receiving promotion during that time period.”

IDW has released a sort-of statement. Not to a media outlet, but to a fan who emailed them, wondering about the book, after Bleeding Cool says they reached out for a comment and got nothing. When the unnamed fan (possibly a member of the Bleeding Cool staff?) asked why they canceled the title without promoting it, IDW Letters responded with, “Our cancellation of the series is related solely to the book’s sales not being at a level we needed for it to continue and nothing else.”

The fan reportedly replied with disbelief, causing IDW to respond with,

“You choosing to disbelieve us does not change the facts of the sales not allowing this series to continue. Books that lose money from the first issue are not viable, especially when we would also owe licensing money to Hasbro for those losing issues. We haven’t printed the series but we do have orders for it, we know how much money each issue will lose. Everyone who did anything for any issues we will publish and any we won’t publish will be fully paid.

We kept Aubrey on the previous series and awarded him with a new series, too. Those facts run counter to the false narrative that we bowed to any pressure. We wish it had worked out. We wish enough fans who wanted the book had pre-ordered it so retailers would order it higher. And despite what anyone tries to say, we promoted the comic as we do any other. Do not let loud voices saying false things online convince you otherwise.”

It’s interesting that this statement brings up the idea of a “media narrative” and the fact that what they’ve done runs counter to the “false” narrative that’s out there, because one could argue that keeping Sitterson on a previous title (after pushback from fans and outlets) and very publicly awarding him a new title only to privately starve it of publicity so that they have an excuse to pull it also seems like actions designed to craft a narrative.

Full disclosure: I’m not a G.I. Joe fan, and so the success or failure of this particular book is no skin off my nose either way. However, what does disappoint me is that this is happening on a book with a female protagonist (which always seems to be the case. When publishers, or studios, or any creative industry is looking for something to cut, women are generally first). What disappoints me, even more, is that despite their words to the contrary, IDW’s actions in this instance paint the picture of a company catering to a very small but vocal contingent of fans of this franchise who stoop to long-term harassment in order to get what they want.

This right here is them getting what they want, and this doesn’t bode well for the future of comics.