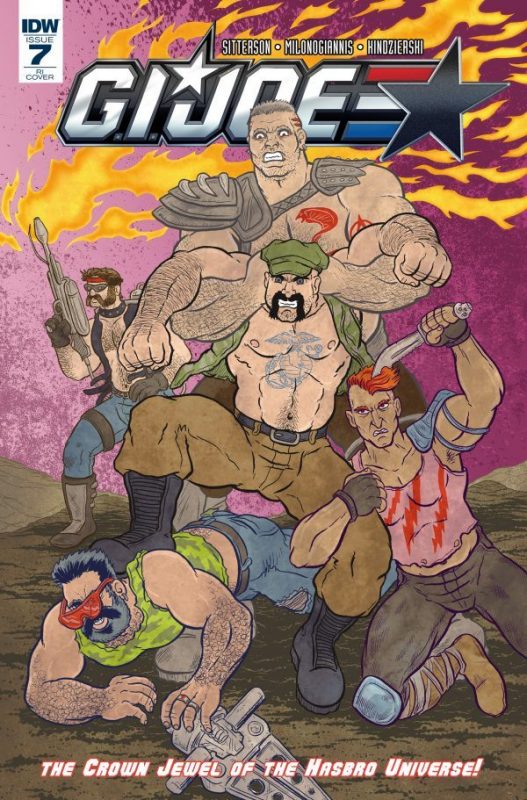 You know what’s hilarious? People who argue that their racist, sexist, and homophobic views are “free speech” and should totally be tolerated, only to whine and complain when someone expresses an actual opinion (racism, sexism, and homophobia are not defensible “political opinions,” they are hatred) they don’t like. Suddenly, it’s okay to be offended. So long as you’re not the member of an actually marginalized group.

Comics writer Aubrey Sitterson is known for, among other things, writing the G.I. Joe comic for IDW and the Dr. Spektor comic for Dynamite. He has a history of sarcasm online. He also has a history of doing what he can to make comics more inclusive, which is all the more impressive when you consider that he writes for a comic like G.I. Joe, a military comic that seems to glorify the exact opposite of inclusion.

And yet, in his run Sitterson has changed characters’ ethnicities, races, and genders in an attempt to broaden the representation in the book. That hasn’t sat too well with a certain contingent of comics readers, who believe that white and male being the default in comics isn’t a problem.

Cut to earlier this week: September 11th. It is a day of a lot of memorials and a lot of sadness expressed over social media, which makes a lot of sense, particularly if you were in New York on that day, and even moreso if you lost someone in the attacks, or the subsequent rescue operations. However, Sitterson pointed something out in a tweet that day that some people didn’t like:

Unless you were there or lost someone, this is what your social media remembrances look like. https://t.co/rZuzODoLnW

Now, keep in mind that Sitterson is talking about something very specific in these tweets. He’s not saying that it’s wrong to mourn or care about 9/11. What he’s doing is calling out the annoying hypocrisy of people who had nothing to do with 9/11—weren’t in New York City (or Pennsylvania, or at the Pentagon), didn’t lose anyone they knew, etc—chiming in with the grieving posts and the “never forgets,” trying to make this tragedy apply to themselves somehow.

He was not downplaying the death of the victims, or the grief of survivors, or disparaging the military. He was expressing his feelings about a particular brand of hypocrisy. No more, no less. And so, when he first posted the above tweets, there wasn’t much of an immediate response.

That is, until Terry Dizard of the G.I. Joe fansite YoJoe.com decided to get into it, using these tweets as an excuse to call for a boycott of IDW until Sitterson was taken off the G.I. Joe title (indeed, all Hasbro books). However, as is made clear by a statement Dizard made to Bleeding Cool, this has less to do with the “offensive” nature of Sitterson’s tweet, and more to do with the fact that this particular site has had it in for Sitterson forever, because he dares to *gasp* not have white, male, and straight be the default, and thus is “disrespectful” to G.I. Joe, its characters, and its fans.

Because being a woman, or a person of color, or a member of the LGBTQIA community is inherently disrespectful?

This led to fans who fetishize the military, while at the same time pointing out that Sitterson’s statements make him unworthy to write for IDW/Hasbro properties, “because at the end of the day, these are still children’s products” (Oh no! The children that we’re trying to indoctrinate into loving guns and war are going to be indoctrinated by this guy who believes that people other than white, cis, straight males exist!), bombarding both Sitterson and IDW to receive a crapton of hateful comments, chastising him for his views.

Suddenly, there’s a brouhaha, and Sitterson responded with:

I’m catching flack for this. But as a guy who stood in the streets of lower Manhattan, where he lived, and watched it all unfold: Fuck you. https://t.co/y8vL1gKJEf

Cue even more “outrage.” Suddenly IDW decides to release a statement, but rather than it being a statement against harassment, or a statement against the fact that most of the people in an uproar are people who generally target women and minorities for simply existing in comics, they seem to side with the harassers, coddling them and letting them know it’ll all be okay:

Needless to say, this spurred more outrage. This time, from Sitterson’s colleagues, friends, and fans who understand the difference between talking about a specific feeling and “hating America,” or whatever values it is that Sitterson’s critics thinks he has based on these tweets.

The folks leading the charge against my friend @aubreysitterson spent a weekend harassing women who work at Marvel for…working at Marvel.

If IDW sides with the “vocal minority” on this issue, they side with racists, white supremacists, misogynists, hate mongering cowards…

If @IDWPublishing capitulates to these targeted harassers & boots @aubreysitterson, it’s going to massively embolden them to keep harassing.

@IDWPublishing: I lost a friend in the WTC attacks and I’m not the least bit offended by anything @aubreysitterson said.

I am a native New Yorker who was in the city on September 11th, 2001. I ran uptown from work to my boss’ home on the Upper West Side not knowing what was going to happen next, or if we were all still in danger. I eventually rode a train home later that evening on a train with people covered in ash, one of them shell-shocked as he ran from the tumbling buildings downtown and just kept running until he got to 34th Street and waited all day for the trains to start running again, too shocked even to dust himself off. I got the reports later of people I know who knew people in the Towers, or who were neighbors with families who lost people. It was very real to me.

And yet, in the years that have followed, it’s astounded me that, whenever it comes up in conversation that I was in New York City on 9/11 with anyone outside of New York, there’s always this weird fascination, and people want to hear my entire account of that day, as though trying to live vicariously through any grief I might have about it. It’s weird. It’s very, very weird. Even I don’t post much about it anymore, because I figure I should leave the grieving to those who are actually experiencing personal loss, rather than taking part in the grief out of some kind of national obligation.

In other words, I totally get what Sitterson is saying. And it has nothing to do with disrespecting those who suffered or died. If anything, it has to do with showing them respect by not making a show of a grief some couldn’t possibly have. As Hamlet said:

“Seems,” madam? Nay, it is. I know not “seems.”
‘Tis not alone my inky cloak, good mother,
Nor customary suits of solemn black,
Nor windy suspiration of forced breath,
No, nor the fruitful river in the eye,
Nor the dejected ‘havior of the visage,
Together with all forms, moods, shapes of grief,
That can denote me truly. These indeed “seem,”
For they are actions that a man might play.
But I have that within which passeth show,
These but the trappings and the suits of woe.
– Hamlet, Act 1, Scene 2

In any case, I hope that IDW comes to their senses and realizes that they shouldn’t capitulate to anyone responsible for a targeted harassment campaign. Because believe me, if they do, they might avoid a boycott from a vocal minority, but they might suddenly find that they receive much less enthusiasm from a wider variety of tolerant, open-minded, and diverse group of comics fans, many of whom belong to the very groups for which Sitterson has historically sought representation.