Idris Elba Gets Dating Advice From Some Adorable Kids, We Can’t Handle How Cute This All Is 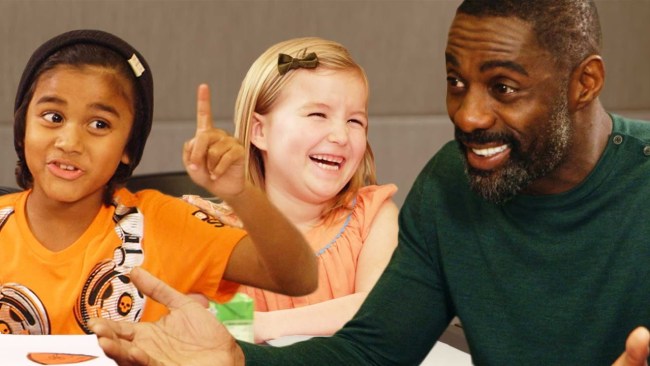 As evidenced by Teresa’s wonderfully delightful take on what her date with Idris Elba would be like, we here at The Mary Sue are, well, big fans of his. (So much so that we write fan fiction-y posts about it. Ahem.)

So believe us when we say that this video of Elba getting dating advice from children damn near brought us to tears.

The video, which promotes Omaze’s charity campaign where you can win a date with Elba himself, features a bunch of schoolchildren offering their own dating advice to Elba. It starts off conventionally enough: he asks them what they think happens at a date. One girl starts talking very wistfully about “taking her to some place that she likes,” then she says, “You pay for everything and agree with everything she says.” Dang, alright. Bold. That little girl knows what she wants in a partner. Good for her.

The little boy sitting next to the girl seems to vehemently agree, saying, “It doesn’t matter about you, it matters about the girl.”

Man, these kids. I tell ya.

Anyway, the video is hilarious. It’s well worth watching, if only to hear the kids’ food recommendations (“Don’t eat beans.”).