Sorry Allies, But I Don’t Care About Your Safety Pin 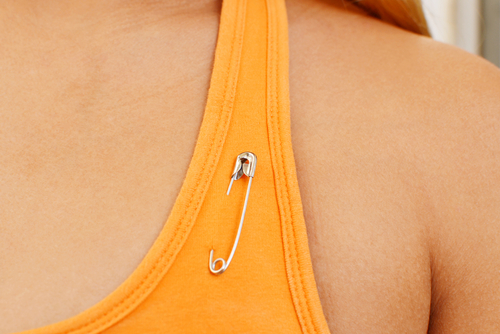 I get it. The Safety Pin (TM) is meant to show solidarity to the many marginalized groups that are facing mounting discrimination after this dismal election. People who don a safety pin are supposed to be allies that we can count on, and come to when in distress. I get that the heart of this trend is pure, but I cannot, no matter how much I’d like to, take it seriously—not with our country’s endless history of “allies” caring more about how they’re perceived than how much they will actually do for our movements.

Christopher Keelty wrote a thoughtful article recently about the problem with this trend, stating “Marginalized people know full well the long history of white people calling themselves allies while doing nothing to help, or even inflicting harm on, non-white Americans.” He went on to remind readers of how even the founding fathers, the original “allies” in a fight for equality, had slaves.

Talk is cheap, and for me, the safety pins feel empty. If they’re someone who finds the people wearing these pins helpful, that’s OK. But when I say I am not moved by this trend, it is not OK to argue with me. If I’m of the marginalized group you wish to stand for, what is the point of your stance if I do not feel your help is, well, helpful?

Let's be clear. This #safetypin isn't a well wish. It's a commitment. You will HELP people. You will stand up. You will defend. It's action.

The problem is not that these people want to help, it’s that they’ve placed themselves in a position of power over marginalized people. They’ve appointed themselves as our saviors in a way we didn’t ask for instead of listening to us in the ways we’ve already told them we need. I’m black, trans, fighting and tired of fake allies.

We don’t need people to show off what an ally they are with a pin, we need them to show up and show out when it counts: through donations, reparations, protests, speaking out against their racist, misogynist, xenophobic family members and believing us when we tell them other ways in which we need their help.

I have no way of knowing if someone is actually willing to fight with me until I see them in action. Whether they wear a pin or not, I don’t need anyone to flaunt their “support” for me and not be able to show me some receipts. I’m not interested. For me, symbolically showing up is not actually showing up. They must do more.

You could quietly voice your support of POC, Muslims & LGBTQ folk with a safety pin, OR YOU COULD YELL IT AT THE TOP OF YOUR LUNGS

What does “do more” look like? Well, recently I saw an interview by the director Barry Jenkins of Moonlight, a powerful coming-of-age film featuring a gay black man, that really spoke to me. In it, Jenkins expressed the fact that he, a straight man, felt the need to hold true to the original play from which the film stems from and chose not to “straight wash” it. He emphasized the difference between being an active ally versus being passive and went on to say, “When the marriage equality bill was passed in the U.S, everyone put those rainbow filters on their Facebook. To me that’s being a passive ally…For me to see this story by [gay playwright] Terrell [Alvin McCraney] and not do it would be me not taking on my responsibility as an active ally.”

Wearing a pin is passive, truly using your privilege for the visibility of those you claim to represent is active. There are many ways to be an active ally that aren’t simply self serving or just for show, and if you’re asking me—those are the ways I’d care to see you show up. You can wear the pin if they want to, but a lot of people just like me won’t see you any differently until you prove yourself in a tangible way.

Jaz Joyner is a black, nonbinary trans writer residing in Brooklyn, NY. They founded QUNTFRONT, were former assistant editor at Time Out New York and their work has been featured in several publications including Huffington Post, Bitch Magazine and others. They are currently a contributing writer for Pride.com.

activismcontributorhow to be an ally