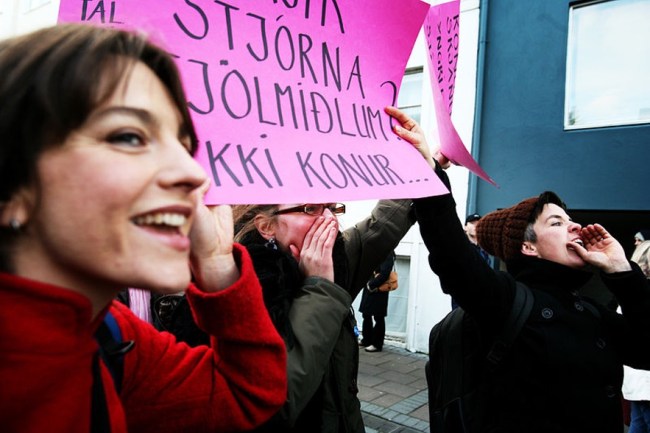 Iceland became the first country to guarantee equal inheritance rights regardless of gender in 1850. Women gained national suffrage in 1920, but single and widowed women could vote locally as far back as 1882, with all women gaining local suffrage in 1908. Today, its parliament boasts two women for every three men serving in government. And as of January 1st, Iceland’s government is now legally enforcing pay equality.

Iceland has had an Equal Pay Act since 1961, but what’s true in theory wasn’t always true in practice. Despite its positive track record on gender issues, its wage gap hovers around 17%, and so they’re looking to close the gap for good by passing the world’s toughest law on the subject.

As reported by The Huffington Post, the new legislation requires “any company or government agency with 25 or more staff members…to obtain government certification of their equal-pay policies. Companies failing to comply with this law will face fines.”

Dagny Osk Aradottir Pind, a board member of the Icelandic Women’s Rights Association, explained that even though Iceland has had equal pay on the books forever, this new legislation “is basically a mechanism that [obligates] companies and organizations … [to] evaluate every job that’s being done, and then they get a certification after they confirm the process if they are paying men and women equally.”

Iceland is currently Number 1 when it comes to the gender wage gap. Meanwhile, the United States comes in at Number 49.

However, Iceland’s wage gap does persist, and it has yet to be seen how businesses will take to the new legislation. The gender wage gap has increased worldwide, thanks to a craptastic global economy (and, of course, sexism). According to the World Economic Forum, “The organization estimates that it will be a century before the overall gender gap worldwide is closed.”