Rachel Brosnahan and her impractical prosthetic is a love story for the ages. 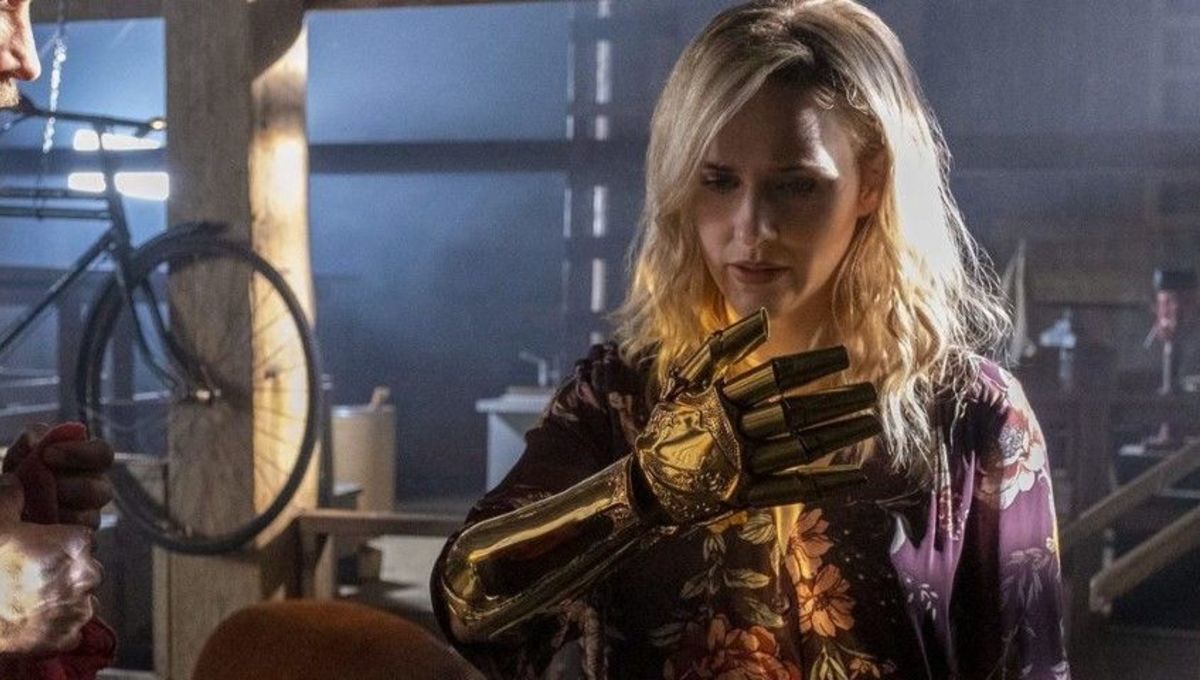 Sometimes a creation comes along that is so deliriously bad, so poorly constructed, so wrong in every way, that it becomes the stuff of legend. We saw this with last year’s cinematic debacle Cats, which earned a fan base devoted to mocking it. And these types of mindbogglingly bad projects are the stuff of legend: from Gigli to Viva Laughlin to The Room, we love/hate these bananas entries into the pop culture canon.

So naturally, when I heard about Quibi’s episode “The Golden Arm”, where Rachel Brosnahan (The Marvelous Mrs. Maisel) plays a woman obsessed with her gold prosthetic arm, I knew I had to check it out.

Losing my fucking MIND at this Quibi show where actual Emmy winner Rachel Brosnahan plays a woman obsessed with her golden arm pic.twitter.com/rSfqCv75SG

And readers … I had no idea what I was getting into. The episode, told in three 7 minute chunks, is the first chapter in Sam Raimi’s 50 States of Fright, a horror anthology series that takes local urban legends and spins them into roughly 30 minute-length tales (“The Golden Arm” is from Michigan).

The concept is good, and Sam Raimi is an undisputed master of horror. And Rachel Brosnahan and Travis Fimmel (Vikings) are both strong actors. But OOF MAGOOF, this was a mess from start to finish. The story follows married couple David and Heather Naimark, who live in an idyllic small town. Dave is a lumberjack and furniture designer, while Heather is … really into herself.

Heather is described as the most beautiful woman in town, and extremely vain. She frequently spends money the couple doesn’t have on jewels and other trinkets, and David is happy to let her, no matter how broke it makes him. I should mention here that the couple are extremely stiff and have the chemistry of two Popsicle sticks rubbing against each other.

It’s the kind of awkward, intentionally bad acting you would see in an SNL parody of a bad movie. In fact, I was certain this was a cut SNL sketch or some sort of deep Tim and Eric-style in-joke. It was not.

So, one day Dave asks Heather to help him fell a tree, which seems like a big dangerous ask, but okay. Whelp, it turns out it was, because the tree falls right on Heather, crushing her arm. After trying to yank her arm free, Dave realizes he must chop it off to free her.

The now armless Heather is despondent over no longer being perfect. To be clear, she still has Rachel Brosnahan’s face and most of her body, so she’s doing GREAT in the looks department. In an effort to make her happy, Dave builds her a prosthetic arm made of gold, which seems very expensive and impractical. Isn’t gold really heavy? How does she wield that thing?

Heather becomes obsessed with her golden arm, and even little girls see it and ask if she’s a princess. WHAT FAIRY TALE PRINCESS HAS GOLDEN ARMS?! If I was a little kid and saw a lady shopping at ye olde country store with what is basically a C-3PO arm, I would have so many questions, but “are you a princess” wouldn’t be one of them.

Whelp, it turns out that Heather has fatal pulmonary gold disease, which is a real thing that can happen apparently. Although it isn’t due to golden arms, because those are absurd. All she has to do is take off her dumb heavy arm, but she refuses because BEAUTY. She then demands that her husband bury her with her golden arm.

The actress literally has an Emmy pic.twitter.com/afKYYRnDuQ

It is at this point that I must tell you that the arm isn’t even that nice-looking. Like, it looks like someone spray-painted a Medieval Times prop gold. For that matter, why didn’t Dave make it gold-plated and save them some money? Does Heather even have a job? Why does she try to carry groceries AND her purse on her arm stump?! Use your good arm, Midge!

What follows is grave desecration, ghosts, axes, and arms a-flying. It is truly, deeply, puzzlingly horrendous.

And I suggest you download Quibi and watch it immediately.