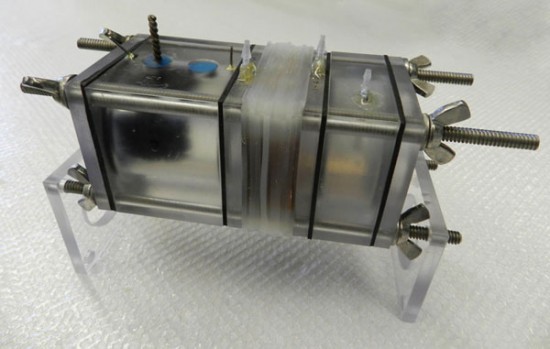 A couple of rules that most people can agree on: Humans need water to survive, and that while living in groups humans will produce waste water of some kind. How to keep that water clean and divest ourselves of that waste has been an ongoing problem, especially in large scale urban living environments. However, new technology from Pennsylvania State University might not only clean water, but produce enough electrical power to be self-sustaining.

The Penn State device is a hybrid one, comprised of two fundamental pieces of technology: Microbial fuel cells and reverse electrodialysis. The two techniques can generate power in their own right, but on their own they cannot practically be made self-sustaining.

A microbial fuel uses two chambers separated by a semi-permiable barrier, with an electrode in each. One side of the fuel cell contains waste water and an electrode coated in microbes. As the microbes digest the organic material in the waste water, they create electrons, protons, and simple molecules like CO2. Here’s where things get clever: The protons pass through the barrier unaided, but the electrons are trapped, creating a concentration on either side of the chambers. The electrons then move through the microbe-covered electrode, through a circuit, and finally end up on the other side of the chamber where they recombine with the protons and oxygen, generating water as a by-product.

Similarly, reverse electrodialysis uses a differing concentration of charged particles, but differently. Instead of just one barrier, it uses two; one allows positive ions to flow through and the other only negative ions. The IEEE spectrum does a far better job than I could at explaining why this works:

Imagine dividing a channel into three parts by separating one side using the negative-ion membrane and the other side with the positive-ion membrane. If you flow saltwater through the center channel and freshwater through the two side channels, osmotic pressure will drive the ions across their respective membranes. One side channel becomes negative and the other positive—essentially creating a battery.

Instead of saltwater, the Penn State hyrbid device uses ammonium bicarbonate salt. The advantage of this salt is that it can be easily separated from the water by the application of heat, and then recycled in the hybrid fuel cell.

By combining the two technologies together, the researchers behind the Penn State hybrid device believe that a self-sustaining and scalable water treatment scheme is possible. For instane, pure electrodialysis batteries need a series of 20-some membranes, and microbial fuel cells produce little power. The hybrid device requires only five membranes, and saw a seven-fold increase in power.

The hope is that someday, a series of devices like this could make water treatment operations cost nothing in terms of power — which is a pretty big deal in areas bereft of reliable electricity, and even in more affluent areas where upgrading vital services is expensive and difficult. Moreover, it has the tantalizing possibility of perhaps going beyond merely self-sustaining and becoming a source of extra electrical power. For now, that’s a dream, but one that could soon be a reality.

(via IEEE Spectrum, further information and image via Bruce Logan)