But Why, Though? There’s Going To Be a Live Stage Show Of The Hunger Games 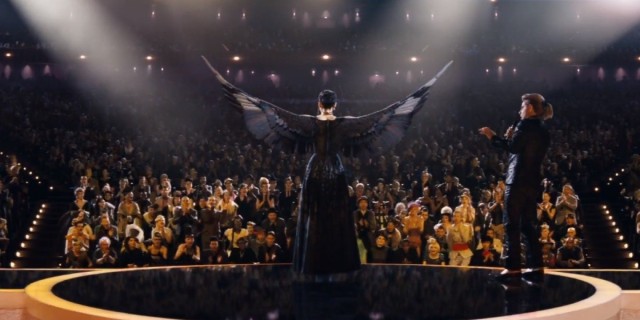 I don’t know about you guys, but when I watched Catching Fire, I wasn’t so much interested in vicariously living through Katniss Everdeen’s rebellion against an oppressive government regime as I was in being one of those passive Capitol audience members who thought her dress was real pretty. That’s totally why you watch The Hunger Games, right? To feel like the people in the audience?

Presumably that’s why Lionsgate has announced a parnership with Imagine Nation to bring The Hunger Games franchise to literal life in summer 2016, with a live stage show right next to Wembley Stadium in London. Wait, so America doesn’t even get to be involved? That’s not fair! We invented it!

“I’m thrilled to be partnering with an innovative next generation studio like Lionsgate on a property that resonates so deeply with global audiences,” de Levita said in a press release. “The theater is a fantastic medium to bring the many meaningful layers of Suzanne Collins’ writing to life.”

Okay, all kidding aside about how the marketing team behind The Hunger Games routinely misses the point of the franchise: if this were done right, I could actually see it being legitimately good. Like, okay, imagine this conceit: you, as an audience member, are from one of Panem’s twelve districts—maybe one of the middle-class ones like 6 or 7—and you’ve all have been rounded up for a special Capitol propaganda session. There’s a big screen in the front, and Donald Sutherland and Josh Hutcherson can record some kind of generic pro-oppression message while the actors on stage act sufficiently ditzy and distracting.

Then all of a sudden the screen gets jammed and rebels start running up and down the aisles! Stage combat everywhere! And then they put on a video from Katniss and everybody does the three-finger salute and has a lot of feelings before they get beat back down by the Capitol, who then release you back out onto the streets and warn you not to get any funny ideas about rebelling yourselves. Tell me you would not eat that shit up like so many meticulously-described Capitol feasts. Somebody get me on the phone with Lionsgate right now, please.