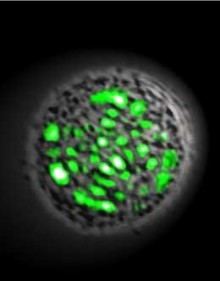 Harvard General School and Massachusetts General Hospital physicist Seok-Hyun Yun and his colleague Malthe Gather have created the first “living laser,” a laser created from a human cell. “This is the first time that we have used biological materials to build a laser and generate light from something that is living,” says Yun.

A laser requires both a material that amplifies light from an external source, and an optical cavity that concentrates the light waves into a beam. Previously, only non-biological materials have been used as the amplifying material, until Yun and Gather successfully used enhanced green fluorescent protein, the stuff that makes jellyfish bioluminescent. Yun and Gather managed to engineer a human embryonic kidney cell to produce green fluorescent protein, placed the cell between two mirrors to create the optical cavity and shot it with blue light. The result was a directional laser beam, visible to the human eye.

Though the laser is small and dim when compared to other lasers, Yun says it is brighter than jellyfish fluorescence. But what would be the point of turning human cells into lasers, aside from the visual that the phrase “turning human cells into lasers” inspires? Yun feels doctors could one day use the cells-turned-lasers to illuminate the human body and capture images, or be used to treat attacking diseases.

Yun and Gather have not yet gotten a cell-laser to work inside a living organism, but they feel the optimal route would be to create a small enough optical cavity into the actual cell, creating something of a self-sufficient laser.