"Guys, do you ever wonder if we're crossing lines into an ethical grey area where mankind was never meant to tread?" "Meh." 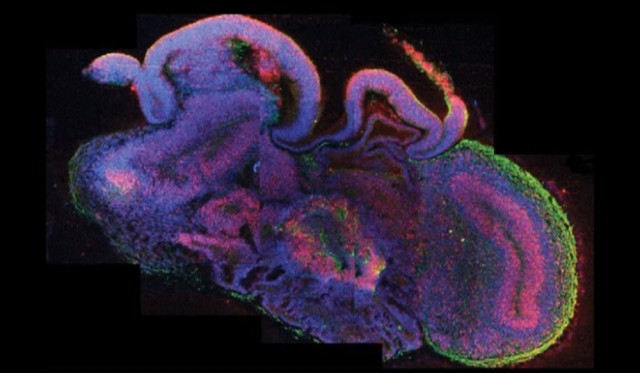 Researchers at the Institute of Molecular Biotechnology of the Austrian Academy of Sciences have done the impossible — or at least the creepy and ill-advised — and grown tiny miniature models of the human brain in a lab from stem cells. Don’t worry, though. They haven’t been networked together into a terrifying living computer. Y’know, yet.

Publishing this week in the journal Nature, the team used stem cells to grow “cerebral organoids” that mimic the development of the human brain. The pea-sized “organoids” — which are about as developed as the brain of a fetus at nine weeks — are, and let’s thank god for small mercies here, incapable of thought. Instead, they’re meant to serve as models for the structural development of the brain in its earliest stages.

The organoids started off as stem cells reprogrammed to make a neuroectoderm — the embryonic structure that becomes the brain and spinal cord of a fetus. Those cells were placed on a gel scaffold to give them shape, and soaked in a nutrient bath to feed them. After two months, the results were tiny structures that had differentiated into brain regions like the cerebral cortex, retina, and hippocampus, which researchers believe closely mirror the development of embryonic human brains.

The hope is that the faux brains will offer researchers a platform they can use to unravel the mysteries of early brain development, opening up new avenues of study for disorders like autism. The brain-like structures could also be used to test drugs, providing a more reliable, less cruel alternative animal testing. At least, less cruel until one of the brain-ettes mutates and achieves sentience, which a lifetime of reading science fiction tells us will happen just about immediately.

Just, nobody tell Bill Cosby about this, okay? We wouldn’t want to traumatize the poor guy. So Mr. Cosby, if you’re reading this, please stop… like 4 paragraphs ago, I guess? I’m sorry.

(via BBC, image via Nature)