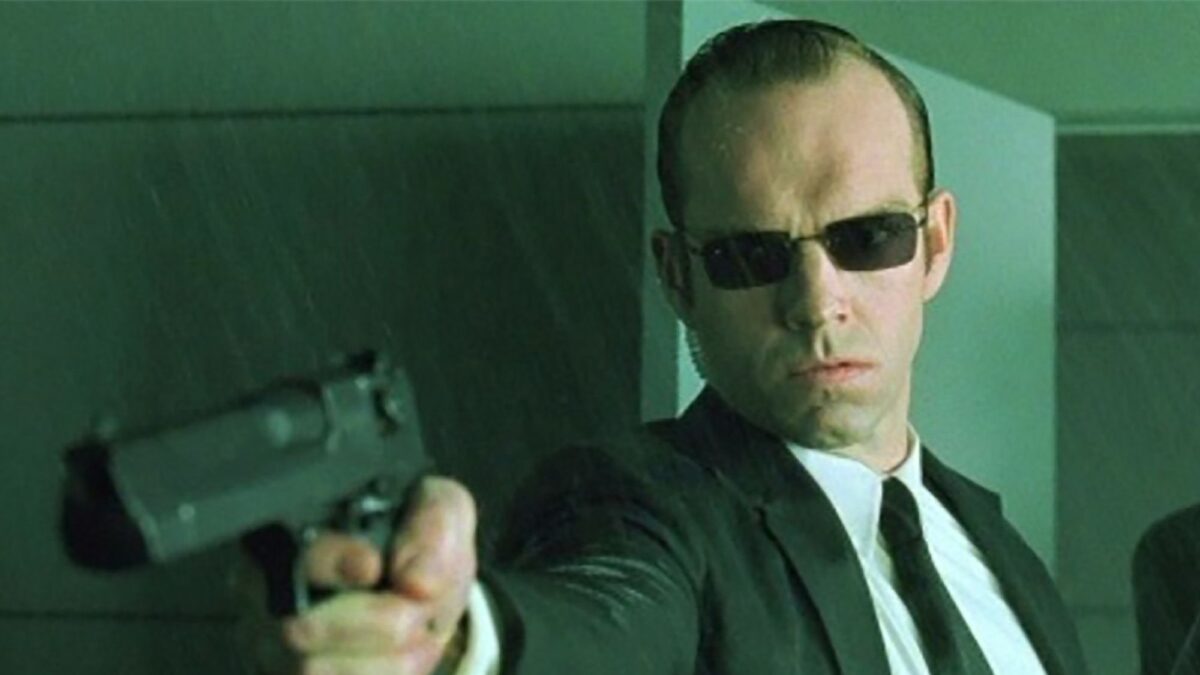 One of the things that has perplexed me about The Matrix since I finally watched it is how a series created by two trans women, starring a majority of BIPOC actors, with such anti-fascist messaging, can be so beloved by the alt-right. Apparently, it is a question Agent Smith has, as well.

Hugo Weaving, in conversation with The Daily Beast about his upcoming film Measure for Measure, talked about the ways people don’t really read below the surface when it comes to complex political texts. The first thing he brought up was V for Vendetta and how the series popularized the Guy Fawkes mask to a bunch of people who probably don’t know anything about the real Guy Fawkes.

I am befuddled by it. It just goes to show how people don’t read below surfaces. They don’t read between the lines. They will take something that they think is cool and they will repurpose it to fit themselves when the original intention or meaning of that thing was quite the opposite. I’d say the same thing about the V for Vendetta mask. There was a group at the Black Lives Matter protest that were up against [the BLM protesters] with their guns, and two or three of those guys were wearing V for Vendetta masks, and I was like, “Wow, man. That couldn’t be more the opposite of what it stands for!” The original V was based on Guy Fawkes, and these guys were trying to blow up the House of Parliament. They were young Catholic protesters who were being persecuted by their government, trying to rebel against that, and taking very violent course of action to make their cause. To me, that mask has always represented questioning the government. And somehow now it’s guys who are generally unhappy with what’s going on, or guys who think they look cool.

The idea of anti-BLM protestors wearing Guy Fawkes masks honestly just makes me laugh, because man … does Alan Moore hate y’all. Alan Moore thinks you guys are such turds because you constantly read the things he writes and take the most fascist, racist reading possible. But anyway, back to The Matrix.

The same with The Matrix. There was something to do with looking cool in black with a gun, and then you can go into a school and shoot people and somehow you’re immune from the consequences of that because you feel like you’re cool—you feel like you’re V, or you feel like you’re Neo or something. It’s a very, very shallow reading of the intention of a film. That’s a problem with popular culture: these films are profoundly thought through, but it’s too easy to look cool, have a cool haircut, and have a gun, and you think that’s all you need to do in life. But you haven’t thought about what that gun is for, and what that haircut is for, and what those black clothes are meant to be. What are you trying to do all this for? Is it all narcissism and ego? Or is it about community and thinking about what’s right for other people? When you get such a split in society, it’s because there isn’t the leadership at the top. They aren’t thinking about other people and are only thinking about themselves. Trump is the classic, most unbelievable example. “Narcissist” is a stupid thing to say, it’s so obvious. He doesn’t give a flying fuck about anyone else but himself. It’s just unbelievable that he’s the president.

Trust me, it is unbelievable to us all, too.

I think what is so telling about the way these stories are able to be appropriated by racists and fascists just speaks to the way people, especially people with privilege, are quick to view themselves as oppressed the moment they are asked to share or use empathy. To a lot of these people, they are already the underdog. They are already being asked to give up too much, and any attempt at parity is seen as an attack on their identity—their ability to be the top dog in a very small kennel.

Racists can see themselves as Guy Fawkes because they don’t actually care about the ideology of the characters. They only need an avatar on which to project their own feelings of justified violence.