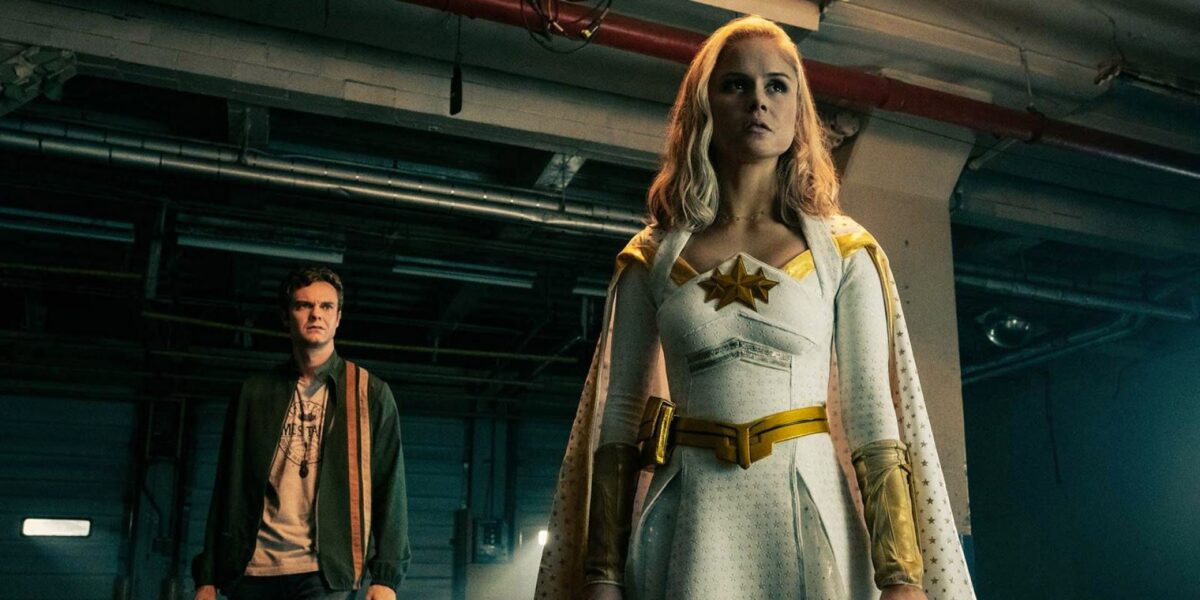 ***Spoilers for The Boys season two***

Starlight (or Annie January) and Hughie Campbell are our central romantic couple on the Amazon Prime Video series The Boys. What fascinates me about the pairing is the complete role reversal from the typical “hero/love interest” dynamic we’ve seen time and time again. Even more refreshing, neither Annie (Erin Moriarty) or Hughie (Jack Quaid) ever protest or posture about the roles they play with each other.

In many superhero properties, it’s often the woman in a relationship who doesn’t have super strength or abilities, and we’ll frequently see her left weak and on the sidelines (if not completely fridged to further the hero’s pain). With the exception of Wonder Woman‘s Steve Trevor, I can’t really think of another example where the woman isn’t a constant worry for the male hero. (I suppose Zendaya’s MJ is a good example of holding her own, but she hasn’t been a direct threat used by one of Spidey’s villains yet, so hopefully, her ability to defend herself as she did in Far From Home will continue.)

On The Boys, the non-superpowered, openly emotional Hughie points out to Annie that he knows she has superpowers and doesn’t care that she’s stronger than him. In season one, the two go on a date to a bowling alley. Hughie starts to realize that Starlight’s holding back her real game, since she mentioned prior bowling experience, and well, she’s a supe. Rather than let his ego be flattered, Hughie asks to see what she’s really capable of doing, which is, of course, an explosive instant strike.

It was this simple scene that first made this relationship so interesting to me. Hughie didn’t care that he was the “weak” one or the one that needed protection. He was interested in Annie, and he was appreciative of her gifts (despite the fact that he was technically on the opposition team at that point). Their relationship flips the superhero/love interest dynamic on its head without aggressively, vocally doing so.

More often than not, when we see these role reversals in pop culture, they end up being under the guise of “see, girl power!!!” with a lot of attention given to the fact that the property is taking a “nontraditional” stance. So watching this relationship evolve without it being that big of a deal that Annie is the hero and Hughie can’t do any of the things she can is extremely refreshing. There’s no discord between them on this account. Hughie’s happy to be rescued, and Starlight’s more than capable of doing the rescuing.

Going back to the one relationship I’ve seen that might be comparable, Wonder Woman, we see that the dynamic is not quite the same. As much as I love Steve Trevor, he is almost given too much to do and can stand on his own. He doesn’t really need Diana as many of these love interest roles often do. Hughie is basically a tech guy thrown into battle, and he’s in way over his head when supes are involved.

To watch Hughie actively need Annie for protection, while not questioning her strength or abilities, seemed like a gift I was being given by The Boys. And it felt empowering, too. Many times in the past, I’ve felt that I was meant to relate to the “damsel” of a love interest in my superhero properties. This time, I felt as though I got to relate to the powerful Annie, as well as appreciate her supportive love interest. It also helps that Annie and Hughie are extremely cute.

Sure, their relationship started a bit rocky when Billy Butcher (Karl Urban) made Hughie use his dates with Annie to get information, but this is also a world where no one knows who they can trust. So I don’t hold too much of those early parts of their relationship against Hughie, and it seems like Annie’s moved past that as well. I do like that throughout season two, Hughie tried to make up for that while also sometimes second-guessing his place in her world.

This ended with Hughie confessing his desire to be done with everything that the last two seasons dealt him—with the sole exception of Annie. The Boys masters a commentary on relationship tropes along with its entire superhero stance. Though we’re seeing some improvement these days, movies and television series still frequently put women in a weaker role while their male counterparts are seen as the dashing hero. With The Boys, we finally got to see what the reverse of this looks like, and in a more mundane world than Diana Prince’s.

Maybe this particular dynamic worked so well for me because Jack Quaid has that rom-com energy that I used to love so much from his mom Meg Ryan growing up, or maybe it’s just his own charm that makes Hughie a wonderful counterpoint to the fearless Annie. The engaging actors aside, I remain appreciative that Annie/Hughie upended the “strong” hero and the “weaker” love interest, and I eagerly await to see where season three takes us.