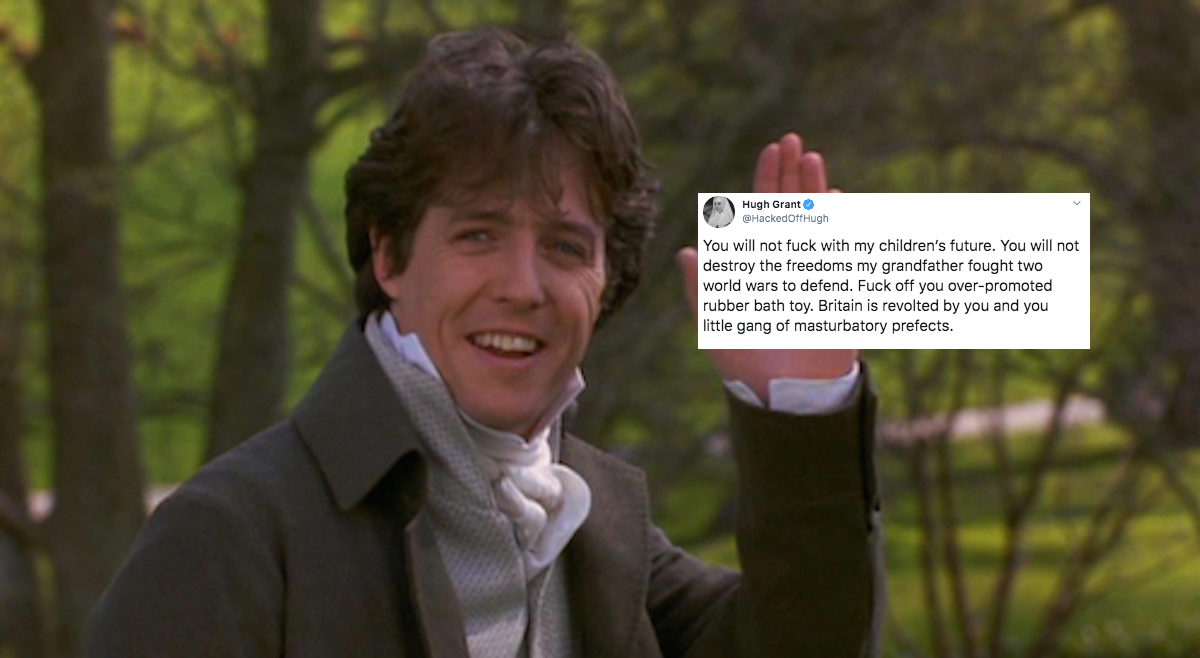 New British Prime Minister and diet Donald Trump, Boris Johnson, has moved to suspend Parliament in order to vastly reduce the opportunity for formal debate or the potential of another deadline extension ahead of Britain’s looming exit from the EU in October. Surely the best way to win on a hugely divisive, dramatically consequential issue is to just shut down the mechanisms of governance and try to quash speech about it, right? That always works well. On Twitter, actor Hugh Grant had a few prime words for Johnson that captured, shall we say, the current mood.

I’m an armchair observer of British politics, but I won’t pretend I can wrap my head around even half of the disastrous Brexit shenanigans plaguing the United Kingdom. Johnson’s latest move, however—while technically legal, and approved by the Queen, who has a largely ceremonial say in it—looks pretty terrible all around. (At least that’s the opinion of this watcher across the pond.) If Johnson were confident of Brexit’s success as has long been his blustery platform, one would think he would allow for robust debate about it. But what’s really happening goes a great deal deeper.

Here’s the thing: Johnson is out to deliver Brexit, deal or no deal; a no-deal exit could be catastrophic for Britain, and for Johnson’s premiership. So it’s actually more that he’s trying to play a game of chicken with the EU authorities in Brussels. Johnson thinks that if he can wave around the real threat of a no-deal Brexit, the EU will bargain with him in a way it did not his predecessor, Theresa May. I don’t know how the citizens of the fine U.K. are feeling, but I’d be nervous if my future hinged on Boris Johnson’s game of chicken and negotiation skills.

Brexit troubles are foremost in the public discourse, but Johnson is also pushing many Conservative policies that a significant portion of the population takes umbrage with. Likely all of this was on the forefront of actor Hugh Grant’s mind when he tweeted:

You will not fuck with my children’s future. You will not destroy the freedoms my grandfather fought two world wars to defend. Fuck off you over-promoted rubber bath toy. Britain is revolted by you and you little gang of masturbatory prefects. https://t.co/Oc0xwLI6dI

I’ve stared in admiration at this tweet since its appearance yesterday. While pearl-clutchers have decried Grant’s use of “fuck,” because god forbid we use strong vocabulary while the world burns, I can only marvel at the extraordinary—and so very British—insults that Grant has cooked up for Johnson.

“You over-promoted rubber bath toy”? So cutting and evocative at once. Please tell me the line of Boris Johnson bath toys is already in production. “Little gang of masturbatory prefects”? Just stunning. I applauded on the subway. Bravo, sir. This is a sentiment that I fully believe no American could have generated (“prefects” being, at its heart, an eminently British word, with a delicious double edge here, since its meaning is both a governing officer as well as a school student who would’ve enforced discipline upon others. Think Percy Weasley before he was cool).

Grant also passionately mentions the need to preserve “the freedoms” his grandfather fought for, and refuses to consider that Johnson’s bloviating will be allowed to alter the Britain he wants for his children. But. Over-promoted rubber bath toy? What a way to melt a man down to squeaky nothingness.

While I’m a big fan of Hugh Grant’s incisive political commentary here, I have to say on behalf of America that I’m a little jealous of Boris Johnson’s ability to speak in complete sentences in the featured video. He may be trying for a nuclear option for Brexit, but at least he’s never proposed to nuke a hurricane.