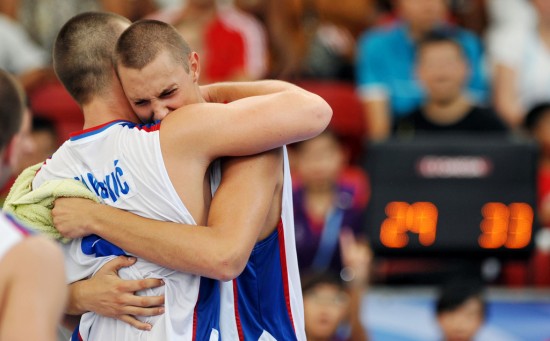 Like many of you, I use a stop watch to time all of my hugs. Emese Nagy from the U.K.’s University of Dundee is also interested in the duration of hugs, and decided to use the Olympic games as a testing ground. With the help of an independent observer, Nagy observed over 188 hugs during the 2008 Olympics. From this, she concluded that, on average, hugs last about three seconds.

Apparently this fits a larger pattern, with three seconds as a “basic temporal unit.” As surprising as this information is, it’s apparently not all that new.

Crosscultural studies dating back to 1911 have shown that people tend to operate in 3-second bursts. Goodbye waves, musical phrases, and infants’ bouts of babbling and gesturing all last about 3 seconds. […] A 1994 study of giraffes, okapis, roe deer, raccoons, pandas, and kangaroos living in zoos, for example, found that although the duration of the animals’ every move, from chewing to defecating, varied considerably, the average was, you guessed it, 3 seconds.

Nagy and others take this a step further, saying that three seconds might be key to our understanding of “now-ness.” If we perceive the world in three second chunks, then that may be what we view as the present moment. Quoted by Science magazine, Nagy says, “What we have is very broad research showing that we experience the world in about these 3-second time frames.”

While there is a lot of evidence backing this observation, it’s hard not feel like this could all just be numerology. Call it The Number 23 syndrome. Once you make a quantifiable, provable observation, you may start to see it everywhere. Psychobiologist (which is the best job title I’ve written today) Colwyn Trevarthen from the U.K.’s University of Edinburgh cautions taking these observations too far.