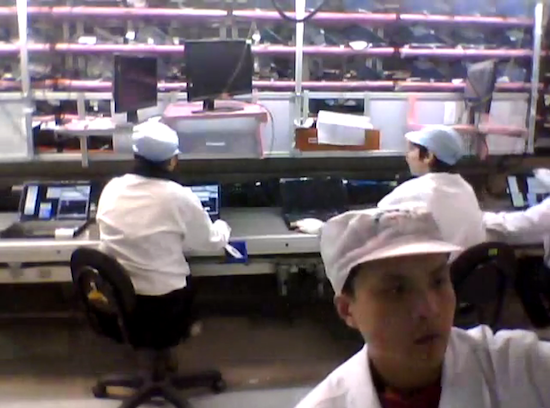 It’s pretty unusual for the public to get an unfiltered glimpse into the actual activities of an assembly line worker in a Chinese factory. That’s exactly what happened after a Hewlett-Packard laptop accidentally shipped with a testing video surprisingly left behind on the hard drive. We can now confirm that factories in China appear to be nearly as boring as factories everywhere else.

The video comes from Swedish YouTube user AnteboyanROX who supposedly found it on a new laptop they had ordered. The worker directly in front of the webcam appears to be testing its functionality by recording in a variety of different modes. What’s more interesting is the slice of factory life we get to witness happening directly behind him. There are a couple workers testing what looks like the monitor’s output channels and then the disc drive.

It’s fairly obvious that the workers sitting on the line aren’t necessarily concerned about being taped. When they finish their distinct task, they sit there and wait for the next laptop to come trundling down the conveyor. Further in the background, it’s possible to watch as a series of televisions are tested. The purpose of this test isn’t clear, but likely has something to do with testing the output functions of some device we can’t see, but is almost certainly another section of laptops.

Perhaps the most notable aspect of the video, beyond being rare, is just how bland the entire thing is. There’s nothing out of the ordinary going on. Working in a Chinese factory appears to be just as tedious as one might expect, but otherwise uneventful.