How to Survive and Succeed at Your First Anime Convention 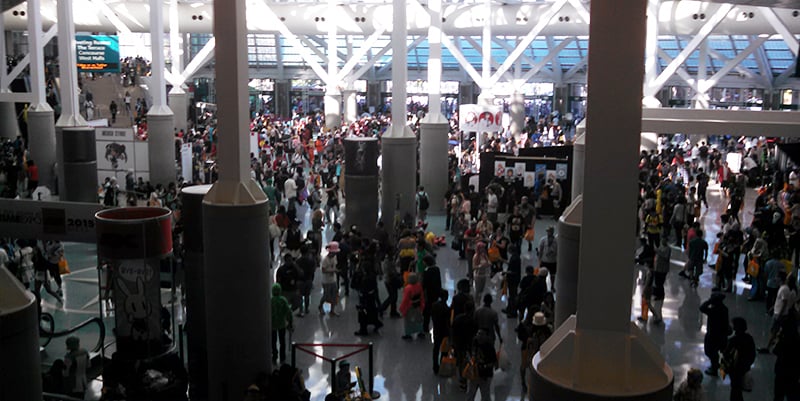 You’ve decided to go to your first anime convention, and that’s awesome. It’s also probably a little overwhelming, if not a bit terrifying. There are admission and travel arrangements to take care of ahead of time, budget concerns looming at every turn, and part of you is wondering if it might not be a better idea to just hide under a desk. Fear not. With a little preparation and some insider knowledge, it’s easy to survive and thrive as a first-time convention-goer.

Find the best fit for you, even if it means starting small.

Not all conventions are alike. Some are massive events where thousands of people descend on enormous convention centers for day after day of constant activity. Others are tiny, laid-back affairs where you can see and do everything over the course of a few hours. It’s important to find an event that matches not only what you want to do, what you can personally handle.

Big conventions in big cities tend to have the longest list of things to do. They also attract major companies and personalities from both the US and Japan. On the other hand, smaller events are often less overwhelming for first-time attendees and can be found just about anywhere. It’s worth checking out a convention’s website before you start buying weekend passes. Look through the guest and exhibitor lists, and see if there are numbers on how many people usually attend. If you see something that catches your interest and you think you can handle the crowd, it’s probably a good match.

Unless you have a heck of a lot of disposable income, you’ll probably be doing this on a budget. That means every dollar you spend on tickets, travel, and lodging is a dollar you won’t be spending on awesome stuff on the dealer floor. Take the cheap flight. Stay in the cheap hotel. Better yet, stay with a friend or relative who lives nearby. Just don’t show them the thing you bought at that one booth. Trust me, they won’t get it.

Putting together an itinerary for each day of the convention is easy. Making one that you can actually stick to is something else entirely. As a general rule, there is a line for everything, and it’s always a good idea to show up early for popular panels and screenings. Give yourself plenty of time to get from one event to the next, especially if they’re far apart.

You should also be prepared to adapt on the fly, as no schedule is immune to sudden changes. Panels and autograph sessions tend to move around in time and space faster and more often than a certain TARDIS-owning Time Lord. If the convention you’re attending has a social media account or a smartphone app, check it on a regular basis for new information.

As crazy as it sounds, bring sunscreen.

Bringing some basic items like a bottle of water is just common sense. Sunscreen, on the other hand, might seem like an odd inclusion. After all, why would you ever go outside at a gathering of people who stereotypically spend all their time indoors? The thing is, con staff frequently end up having to send long lines out of the building, especially during registration and badge pick-up. Spending several hours under the summer sun just to pick up your weekend pass is hardly a rare occurrence. Better to stuff a bottle of sunscreen in your backpack than spend the weekend unintentionally cosplaying as a lobster. And yes, I learned this lesson the hard way so you don’t have to.

I have a lot of respect for cosplayers. They spend huge amounts of time and money in order to recreate elaborate outfits that were never designed to fit a real, three-dimensional person. The results are frequently mind-blowing, but also incredibly difficult to move around in. Navigating a crowed hallway is much harder with Attack on Titan maneuver gear strapped to your waist, so give cosplayers a little extra room if you don’t want to be part of a massive collision. A little courtesy helps keep everyone moving along smoothly.

When in doubt, remember why you’re there.

It’s physically impossible for one person to do everything, even at a fairly small convention. At any given moment, there will probably be at least three things going on that you want to be a part of. Everything sounds like fun because it probably is. When that crushing multitude of options makes it impossible to decide what to do, just remember the one thing that made you want to attend this particular convention.

Everyone goes to anime cons for their own reasons. Some are there to scour the merchandise booths for the one supremely awesome item that they’ve spent years searching for. Others want to go to all the panels and learn about all the things. Maybe you’re after an autograph from a particular voice actor, or maybe you just want to meet a bunch of people who share your interests. No matter what convinced you to give the convention scene a try, let that guide you as you decide how to spend your time there. Have fun, and don’t worry if you don’t manage to cross off every item on your ambitious to-do list. Just showing up is half the battle.