One Cool Aspect of the Formation of the Moon: Lava Rain 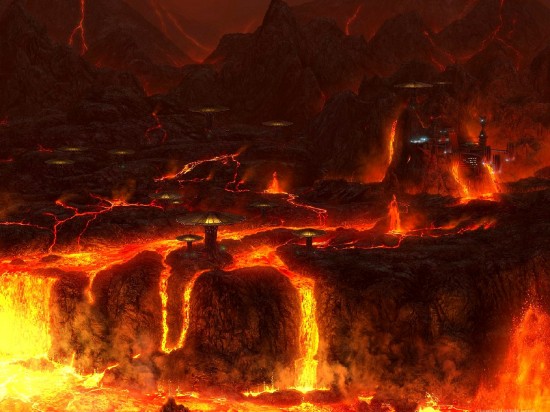 The “prevailing hypothesis” on how Earth got its moon these days is that a massive asteroid crashed into the young planet about 4.5 billion years ago.  The heat and force of the impact vaporized a lot of rock and metal and threw it into the atmosphere, where it eventually formed a ring, and then that ring coalesced around the remains of the asteroid and eventually became our lovely lunar satellite.  We just had to spend a few million years looking like Mustafar.

As it turns out, scientists think the answer lies in something totally awesome: rains of molten lava.

Rising rock vapor would see its magnesium oxide start to condense into droplets and fall back onto the planet’s surface. The iron oxide inside the rock vapor wouldn’t have condensed as easily, meaning far more of it got mixed into the disc that became the Moon.

This means that, for millions of years, unimaginably hot molten rock fell from the sky onto the infant Earth, and this was about as regular an occurrence as a rainstorm today.

I think we can all agree that the moon’s creation sounds pretty metal.  No, I mean like heavy metal.  Oh god.  No, come back!  I didn’t mean for that to be a pun!