How The Flash’s Femmes Fell Flat This Season 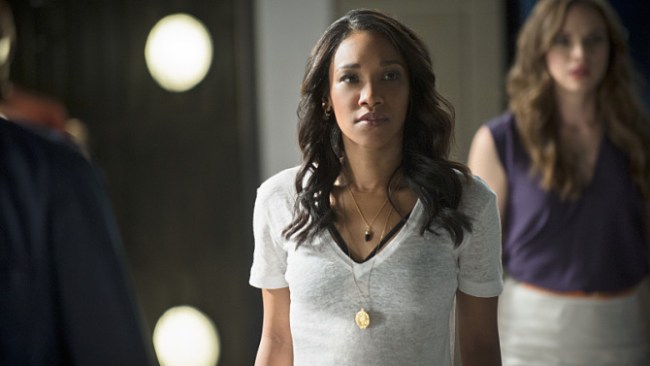 Let me start off by saying that I’m a fan of The Flash. For a CW show, it is remarkably angst-free. As a show, Supergirl seems to be going through puberty, and Arrow realized a while back that brooding is Steve Amell’s strongest suit as an actor, so I appreciate the plucky, upbeat break on Tuesday nights. Grant Gustin is at his most irresistible with a twinkle in his eye, and the quirkiness of HR and Cisco add to the fun. It’s even been a pleasure to see Kid Flash come on the scene—a hero who just has fun being a hero: how refreshing! But, lately, I have a bone to pick with The Flash because it’s quickly becoming an anti-feminist show.

Take last week’s episode as a case in point. In that episode, we are introduced to Gypsy, an apparently kickass woman whose job is to uphold the law of Earth-19 and return HR to his own realm, where he will face judgment for his selfish desire to travel between worlds. At the beginning to the episode, she is an impressive specimen of feminine might: she manages to handily defeat all of the male characters in a way that garners the respect of both the viewer and her male opponents. However, as the story unfolds, we learn that Cisco is able to defeat her, despite her superior powers, and that she actually likes it. Her response to defeat is to become physically attracted to Cisco, making her yet another example of that well-worn misogynistic trope that women actually like to be “put in their place.”

Then there’s Iris. The show got us invested in Iris because we cared that Barry cared about her. As the longtime secret love interest, Iris was set up to matter to us only because she mattered to Barry. Now that Barry has her, they have attempted to shift her into more of a Lois Lane type—the daring, intrepid reporter who risks it all for the welfare of the people who deserve to read the truth. The problem is that we don’t care about her stories—the show has not asked us to invest emotionally in her work. So, instead of seeming daring, she seems reckless, like she’s seeking out trouble for nothing but a silly little story. The reason we get this impression of her work is because that’s how all of the men in her life treat her work. Moreover, can we talk for a minute about the scene in which Joe asks Barry to get a handle on his woman and rein her in? Seriously, Flash? There’s no point in giving us a feisty, motivated, independent woman of color if you are just going to ask the white boy that she’s dating to convince her to remain squarely in her gender role.

And, finally, let’s look at Caitlin’s recent plotline. While Caitlin has never been the strongest woman on the show, and most of her “doctor” pedigree is translated into caregiving and healing, she is still a scientist, and her science has helped the team solve cases in the past. This season, however, she seems to have two roles: 1) teach Julian how to interact with others, much as a classic Victorian woman might be expected to have a “civilizing” effect on a man, and 2) hide her powers. Why is it that when Cisco or Wally or even Barry gets superpowers it’s considered a gift, but, when Caitlin, a woman, gets powers, we must hide them away at all costs? She is written as unable to control her powers, unable to see them as anything other than a curse. It’s Elsa from Frozen all over again, except that at least Disney wrote their snow queen out from under her father’s oppressive thumb, whereas The Flash seems perfectly content to leave Caitlin literally shackled. She even begs to be restrained and thanks the men for putting her in bonds to help her contain her power.

In a world in which we misogyny and rape culture celebrated as “winning strategies” and legitimized by our current government, representation matters more than ever. Heroes do better. I hope The Flash will too.