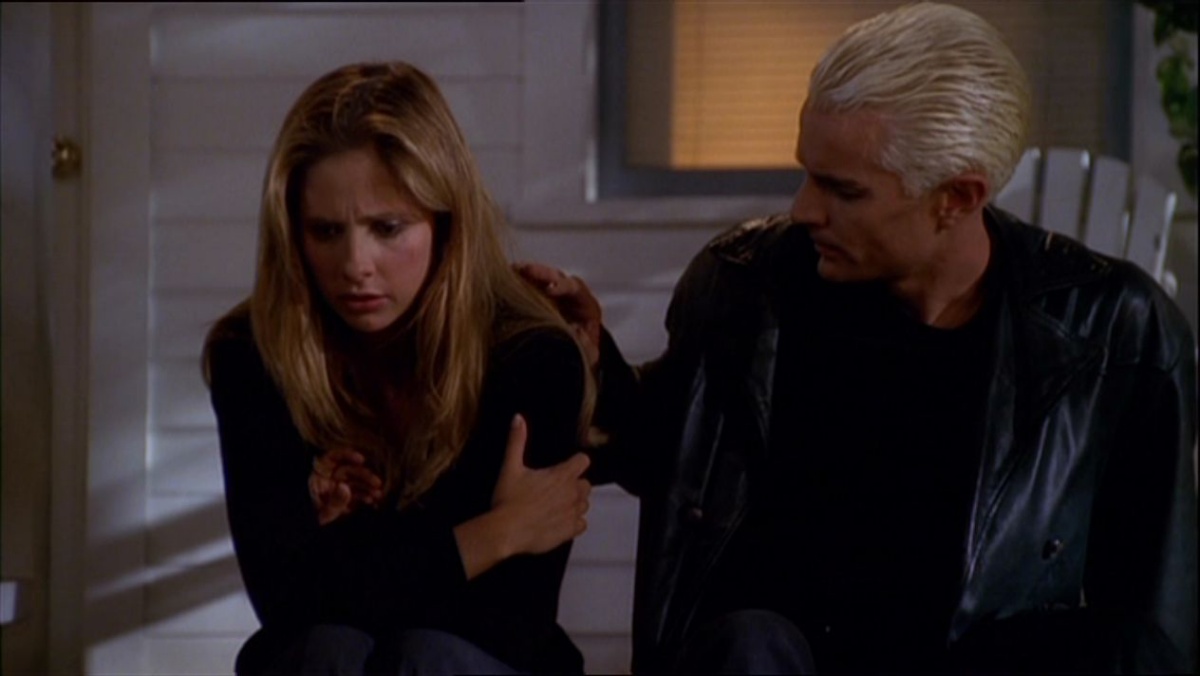 The episode “Seeing Red” is infamous among the Buffy: The Vampire Slayer fanbase for two reasons: Tara is killed by Warren, and Spike attempts to rape Buffy. Both are things that have been debated amongst the fandom ever since, but today we are talking about the latter act. Because having rewatched this episode recently, the brutality of it stands out.

“Seeing Red” opens with Tara and Willow in bed, having just gotten back together, and during their post-coitus conversation, they talk about the shame that Buffy feels for having a sexual relationship with Spike. That shame is something that weighs heavily on Buffy, especially during this episode. Everything is made worse by the fact that Spike slept with Anya.

Later on, after several talks that Buffy and Spike have separately with other people about the nature of their relationship, Spike confronts Buffy in the bathroom. The scene opens with a crane shot that allows us to get an idea of the small space that Buffy is in as she goes in to take a shower, hurt after an attack. Spike comes in uninvited, insisting that they have to talk, but Buffy tells him to get out. Then things begin to escalate. If you would like to see the clip for reference, I’m putting it down below and while it is not graphic, it doesn’t make the scene any easier to watch.

Buffy struggles, tells Spike no over and over again, that he is hurting her, but he just continues to pull at her clothes and attempt to overpower her. He tells her that he can prove that she loves him if they just have sex again. Eventually, she kicks him away and he crashes violently into a wall.

Buffy: Ask me again why I could never love you!
Spike: Buffy… My God, I didn’t–
Buffy: Because I stopped you! Something I should have done a long time ago …

James Marsters, who played Spike, is on the record as saying that this was one of the worst things he had to do for the show. During an interview with the Observer, Marsters explained how the scene in that episode came about:

“That was the hardest day of my professional career. I don’t like to watch content with scenes like that. It’s my little red button, I don’t like to press it. What happened on Buffy and the reason it’s lasted is they asked writers to come up with their worst day. The day they don’t tell anyone about. The day they got hurt really bad. Then slap fangs on top of that secret and tell the world. In this case, the idea for the script came from one of the female writers. In college, she got broken up with by her boyfriend and went over to his dorm room, convinced that if they made love one more time everything would be fixed. She really threw herself on him and he had to throw her off. It was an incredible gift that she was willing to share that with the world. The thinking was, since Buffy is a superhero and has the power to throw Spike through a wall, it was okay to switch the sexes. “

This moment, according to series writer Jane Espenson, was necessary for Spike to want to go get a soul. Of course, that only highlights that this scene is about Spike’s character and serving him through the brutality he inflicts onto Buffy.

None of the ships in Buffy are perfect, but this episode was a real game-changer for me in how I saw Spike and Buffy’s relationship, which wasn’t helped by the awfulness of season seven. Spike’s attempted rape is brutal and it is a long scene, almost a full minute from beginning to end. You feel the weight of it all.

What was fun and complicated about Spuffy then became a really messed up dynamic that the show never really knew how to tackle. You don’t write a scene like that, of a man attempting to rape a woman he claims to love, and then use that as his character development. It did a disservice to them both and to fans of the relationship.

A relationship between two broken people who feel sexually drawn to each other, but have a lot of emotional baggage that taints their connection, was compelling enough. “Seeing Red” bloodied it up and there was not enough bleach in the world to ever make it clean.