“How Infinity War Should Have Ended” Is a Goddamned Masterpiece

“How It Should Have Ended” really outdid themselves with this hilarious take on Avengers: Infinity War.

I spend a lot of time thinking about the Avengers—one might venture to say a bit too much time—and that makes this HISHE even closer to my heart. The in-jokes are delightful, but the real genius here is showing how easily Thanos and his minions could have been defeated with a few different approaches.

Like, say, Doctor Strange using his Sling Ring to send Thanos into a portal, closing the portal, and slicing off Thanos’ Gauntlet hand. Or, say, Thor just chopping off Thanos’ arm with Stormbreaker and skipping the whole “you should have gone for the head” part. Or someone shutting up Star-Lord long enough for the plan on Titan to actually work. Or Wong arriving in the nick of time in Wakanda and just magicking away all of the Outriders because why not and also we always need more Wong.

In the scene here where we see Nebula get her revenge against her abusive father, this shifts from being purely comedic and actually becomes a poignant moment. I’d love to see something like this actually play out in Avengers 4, and considering Nebula’s role in taking the Infinity Gauntlet from Thanos in the comics, that may prove possible.

Then there’s nothing more joyful than watching all of the massive Infinity War team sit together at HISHE’s traditional diner table (alongside Batman and Superman). What a truly ridiculous and wonderful bunch they appear to be when all lined up like that. And we even get a little cameo from Korg, Miek, and Valkyrie—honestly, this 10-minute video is giving me a lot of things I wanted to see in Infinity War and is balm to my grieving post-Infinity War soul. The end might be my favorite thing of all. I’m not going to spoil it, but this is truly a thing of beauty. 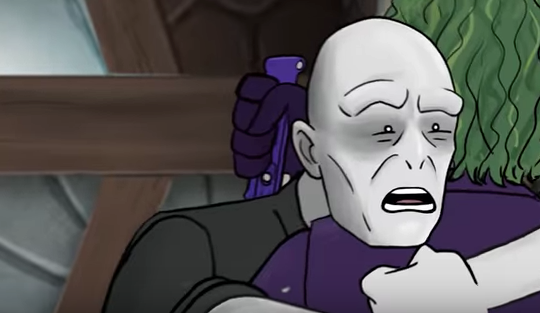 Avengers: Infinity WarHow It Should Have Ended