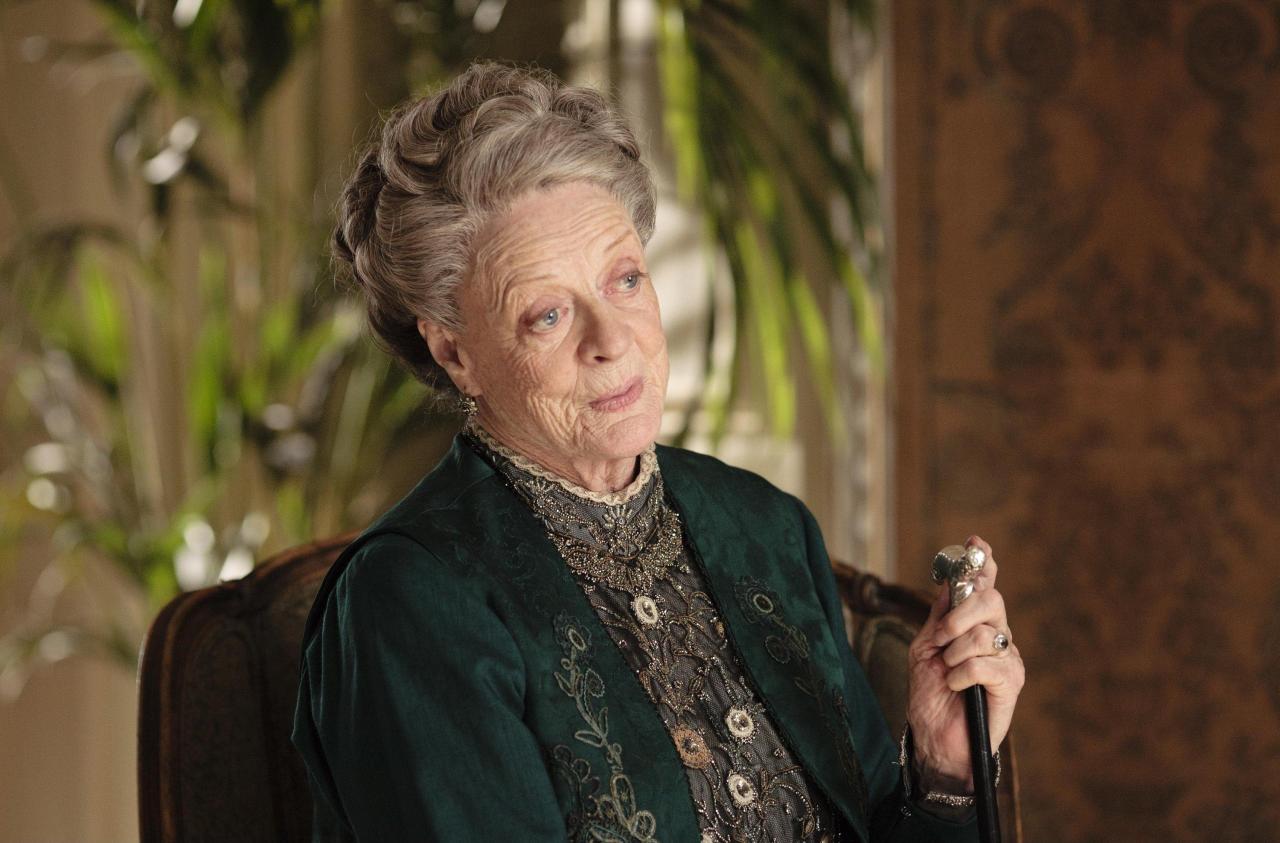 It appears the mutterings about Downton Abbey ending were rooted in truth: series six is likely to be the ITV costume drama’s last.

The end of Downton as viewers have come to know and love it would likely phase out when the matriarch, an impeccable Maggie Smith as the Dowager Countess, dies.

The character takes with her the traditions of Downton, the history, the last of the Victorian/Edwardian sensibilities — which seems to be the only possible way to end the series.

The Final Episode of Downton Abbey

Violet Crawley has died — a career highlight performance for Dame Maggie — and the entire Crawley crew has reunited at the estate for her funeral. The little ones have grown up. Sybbie will be grown up enough to look just like Sybil. Little George looking remarkably like Matthew. Marigold — who has finally been accepted by the family—looks (thankfully) more like Edith than Mr. Gregson.

Aunt Rosamund sits with Edith because she’s the only person on the show who has ever actually loved Edith, and even though we may never know what happened to Marmaduke Painswick, Rosamund deserves an emotional departure with her mama in the finale just the same as the rest of the family.

Anna and Mr. Bates have a slew of little fair-haired babies that all have flora/fauna names and everything is beautiful and nothing hurts for them (finally).

Rose and Atticus return from America with Boston accents and  have children of their own but we all know they are secretly nowhere near as cute as the Bates’ bambinos.

Mrs. Patmore will be crying, Daisy will hand her a hanky. Daisy will have risen in the ranks to become the official Downton village teacher, a career that is not only fulfilling but suits her. She will also make the best apple tart you’ve ever had — she did learn from the best, did she not?

Thomas — oh, Thomas — will become butler when Mr. Carson retires and will eventually provide a safe haven for homosexuals during WWII. Thomas Barrow is not a bad man. He’s hot, he smokes too much — but he’s not evil.

Baxter and Molesley will be the new unresolved-sexual-tension power couple downstairs. Mr. Molesley should never dye his hair again, but he should get drunk and dance more.

At the end of series five, we had a perfectly Carson-esque proposal of marriage, to which Mrs. Hughes replied in a perfectly Hughesie way, “Of course I’ll marry you, you old booby! I thought you’d never ask!” No doubt they’ll retire, a good twenty years or so left for them to run some kind of inn and electric toaster & wine decanting emporium.

Cousin Isobel, having finally come to her senses and dumped the fella with the dillweed sons, will finally get together with Dr. Clarkson in medicinal matrimony.They can run a hospital in Yorkshire and make out.

Robert will not bring his new dog to the funeral. He finally realizes that he loves Cora more than he loves his dog.  Cora will actually have a plot line of her own for the entire season, and we will see her have an amazing conversation with Violet before she dies, wherein we learn that even though she’s an American, Violet has always liked her — because she made Robert happy (cue tears).

In the final sequence, as they lay Violet to rest, we’ll see a long pan of all the characters: team Downstairs intermingling with Upstairs, time and the end of this era bringing them all together.

Carson and Hughes will be sitting with Robert and Cora, upstairs/downstairs parents mirroring one another’s compassion and wisdom.

Robert will be looking at Sybbie, and he’ll blink and for just a split second, he’ll see Sybil. Cora will be looking at Mary and Edith, who are sitting with their children, and Mary will look over at her and catch her eye and put her hand protectively on George’s shoulder. We’ll see how much he looks like Matthew. Marigold will hug her mother, who has begun to tear up; because that’s what kind of sweet, thoughtful, unspoiled child she has grown into being.

Isobel and Dr. Clarkson will be a little late because they were at the hospital. They’ll both have crisp white coats on and come across the lawn and everyone will embrace them. Isobel will take a moment to say goodbye to Violet, say something under her breath at her headstone like, “You were such a dear friend.”

Dr. Clarkson will take her hand and they’ll sit down. Then the theme will begin to play softly beneath the scene, and the preacher will begin to say a prayer, somewhat inaudibly, as the camera pans through everyone again, and we’ll here Maggie Smith’s voice, in an Emmy winning voiceover:

The great philosophers have long debated what it means to die. Are we to be forgotten the last time someone breathes our name in reverie? Do we die when the last photograph has faded, or our children can no longer remember how it felt to be held in our safe embrace? What it is to have lived on Earth, to have seen so much.

[pans to Robert and Rosamund, Cora]

To bring children into the world, to watch them grow, [Robert takes Cora’s hand. She smiles at him, tears glistening in her eyes] to watch them fall in love and have their own lives, their own families [pans to Mary, Edith] to see a new generation take the reins and steer your fate in directions you never would have thought possible. To see a new generation of love, of your legacy, unfold right before your eyes.

[pans to George, Sybbie and Marigold]

To see the faces and spirits of lost loved ones in the sparkling eyes of their children, to know that even in death we live on in the memories of those that we loved.

To have trusted companions, allies and even friends in those who cared for you, who helped to make your home more than just a grand house – but a place where time stands still, helping always to preserve your living history.

And to those whom we befriend – to know, without a shadow of a doubt, that they take your heart unselfishly, and that in their memories you will live on in utmost truth [Isobel smiles].

Did I make the most of life?

[camera pans to her headstone, then, begins the slow pan out, revealing Downton Abbey behind it]

Did I make the most of loving those that I loved — that loved me?

[wide-angle shot of the estate]

The great perhaps is stunning — but never so much as this. Never as beautiful as Downton Abbey in the spring.

Abby Norman’s writing career began while still a high school student, where she regularly earned awards and recognition for her vibrant and occasionally off-beat prose. She briefly attended Sarah Lawrence College in Bronxville, New York where she studied dance — and perfecting her hipster aesthetic. Her first book of essays was published by Thought Catalog in 2014, and has been published by The Huffington Post, xoJane, Bustle, and Alternet, and was recommended by Time Magazine and NPR. In addition to her work online, Abby is a news reporter for midcoast Maine’s hyper-local news network, VStv.