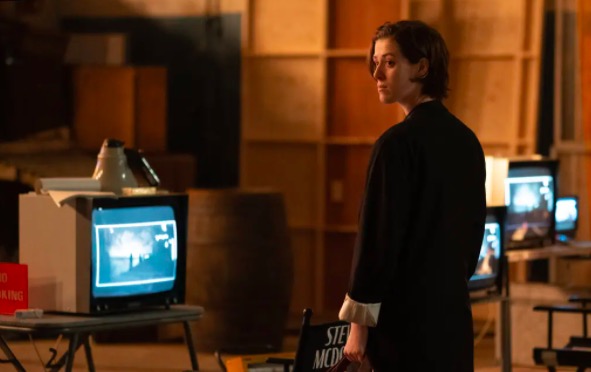 Don’t try to view The Souvenir Part II unless you’ve seen its predecessor, because you won’t come close to appreciating it. And I mean that in the best possible way. What writer-director Joanna Hogg demands above all is attention, and as another great filmmaker once suggested, love and attention just might be the same thing.

Such focus on the insular details of your own art rather than relying on a deep familiarity with the work of another (as most filmmakers predictably demand) would be an even worse form of vanity if Hogg weren’t so devoted to telling a story that goes so far beyond herself, even as she keeps the focus tightly on her surrogate Julie, who is once again superbly played by Honor Swinton Byrne.

The artist she will soon become is clear enough even if the way forward isn’t, but pain makes a good catalyst as Julie grapples with the death of the man she adored in The Souvenir. Though, as conversations with many of his associates and his own parents reveal, no one really knew just what made him tick, much less why he deconstructed.

Contradictory? There’s no question. Portrait of the filmmaker as a young woman? It’s already been said. But there would always be more to it, since any film or art in general about any protagonist besides a straight cis white man is bound to bring up at least hints of the personal as political. And in attempting to assemble the wreckage left in the wake of the demise of a toxic relationship into something salvageable, Hogg doesn’t just painstakingly chart Julie’s progress, but she takes care to disclose just how this story could be told in the first place.

Hogg has always been open about how Julie’s wealthy background played a role in allowing her to come into her own, and in The Souvenir: Part II, Julie is able to buy as well as film her way out. Its necessity is never a question, though, since the film she attempts to create from her grief for her graduation project almost falls apart before it even comes together because … old white men.

At least a little condescension towards any experience that doesn’t reflect theirs can generally be counted on, and those at Julie’s school dismiss her script as unprofessional and unrelatable, thus withdrawing any and all institutional support. So, it’s off to the parents for help, support to be found from those also designated as an Other (as well as Byrne’s real life mother Tilda Swinton), and shots of white flowers tentatively, delicately in bloom throughout to reassure that the impending rebirth we sense is still in store for our heroine.

And by the end, the sweet revenge of success might just see one of those old white men lavishing your finished product with praise.

If only all obstacles were external. As any artist knows, there’s always yourself to overcome, even when all else goes your way, and the male gaze permeating Julie’s environment has her doubting her decision even as she remains sure of her end result. Then, there’s the actor friends of hers who assume they’d be in any movie she made, and attempting to define the dynamics of her doomed relationship with her junkie, now deceased ex Anthony (Tom Burke) for her doubtful film crew when it remains ultimately indefinable, even to her.

Even the finale—which risks the mere saccharine, uplifting simplicity of seeing the film that Julie naturally christens The Souvenir screen before an audience—becomes far more than the sum of its journey; it’s a reminder that Julie has found not only her voice, but her own very unique gaze. And her transcendence through creation, which allows her to own the narrative that Anthony once sought to define, allows Julie to find transcendence and shout out her influences, from Kubrick to Michael Powell and, once all is revealed, even Pedro Almodóvar.

In Hogg allowing us such intimacy, from a life to an artistic process, peeling back the curtain and including period details such as the fall of the Berlin Wall feels like an attempt to ground the film from its own sense of timelessness. Thank goodness Hogg is aware that after such an emotionally exhausting journey, sometimes all that’s left to do is simply yell cut.